3 Days: Zoo Mystery, a new hidden object game from Realore Studios, drops you in the middle of a mystery at the local zoo. You play as the owner's niece, Anna, whose job it is to find several animals that have mysteriously disappeared. You have three days to solve the crime, otherwise the feds sweep in and shut the place down for good! Serve meals, work with the police, become a salty dog, circumvent hi-tech security systems and so much more in this eclectic mystery. 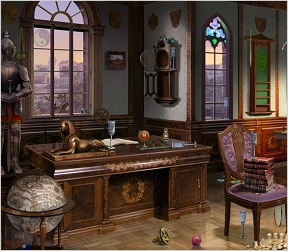 Diving head-first into 3 Days: Zoo Mystery shouldn't be a problem for anyone who's ever played a hidden object game. In each level you're provided a list of items to find (in this case the list is pictorial as opposed to written), and when you find an item, simply click it. 3 Days introduces several departures from convention, such as the ability to manipulate your environment by moving things out of your way, and even a plasma gun that will teleport large items to a COMPLETELY DIFFERENT DIMENSION! (Don't worry, they come back. Hopefully the same as they were before they left...)

As you pick your way through this zoological whodunit, you'll not only be employing your object finding skills to help the many wacky personalities you meet, you'll encounter a number of odd jobs, puzzles and mini-games as well. Your tasks will range from something as simple as cleaning up after a party to helping stop a rogue particle accelerator from BLOWING UP THE WORLD! 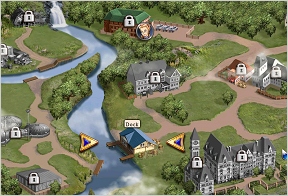 Analysis: While it may seem like a small thing, the ability to manipulate your environment (and in some cases make it disappear), really does make a difference in the hidden object genre. It's such a natural act (well, okay, sending objects to another dimension may not be natural, but just run with it) that you do it every time you're looking for something in real life. Can't find the car keys? Start moving couch cushions, items on the counter, etc. To this day I can't think of a single game that lets you shift objects around to look for items. This heightened level of control enhances the enjoyability of object finding by a distinct margin.

Few tasks you encounter in 3 Days present much of a challenge. Well, except for slider puzzles. Those things seem to inhabit every corner of the game, and I just can't do those things! Otherwise, the relatively low level of difficulty keeps the game moving at a steady clip. Puzzles and mini-games are both plentiful and varied, and you'll encounter everything from word searches to jigsaw puzzles, tower stacking games and a few original creations as well, such as reconstructing a coffee maker!

3 Days: Zoo Mystery suffers from a somewhat inconsistent presentation. The quality of the graphics seems to rise and fall, as some of the settings are absolutely beautiful while others, not so much. The narration falls short of perfection and the storytelling really stumbles at times. The plot meanders as you go from animal detective to being the designated odd jobs person for the entire town. As I stocked crates filled with boots and tires I thought to myself, "Self, what does this have to do with solving the case?" The characterization is also lacking, and in many instances, potentially emotional moments tend to get hijacked by abject absurdity.

While the story may leave something to be desired, it doesn't spell doom for 3 Days: Zoo Mystery. Swooping in to save the day are the numerous mini-games and diverse gameplay, leaving you with a refreshing and pleasant hidden object mystery to solve!

Dump near the old circus

Kayleigh's done it again, with yet another awesome walkthrough! \o/

Dump near the old circus

Kayleigh's done it again, with yet another awesome walkthrough! \o/

For the record: I purchased the full version after liking the demo; the registration code they gave me didn't work. The help person initially responded by giving me another code, but that still didn't work, and despite multiple e-mails I haven't heard from them in about a week. I liked the game, but don't throw your money away!

I have been stuck in the library for ages - trying to find the spring. Can't see what I'm missing - any ideas??
Thanks

Use the plasmatron to vanish both the desk and the chair and you will find the spring behind the chair.

I am in the bar with a broken fish - how do I get the fish back together. The game seems to have frozen there.

First, did you finish finding the other hidden objects in the scene (skates, starfish, flowers, etc.)? Once you do that you are left with pieces of the fish on the bar. Click on the pieces and it should take you to a jigsaw puzzle where you can piece the fish together. It won't take you to the jigsaw puzzle until the rest of the items are found. If, after all other items are found and the puzzle doesn't come up when you click on the fish pieces, this may be a bug in the game. If that is the case it is best to contact the vendor where you purchased the game and see if they have a fix.

I just finished this game and thought it was great! I love how you can move things around and there are so many different mini games, so you don't feel you're doing the same thing over and over.
My only question is why do you never get to go into the storage building on the other side of the island?

That is just one of life's little mysteries. :-)

I notice there is one building left that we have never discovered: the storage one at the bottom left on the map. How to get in it?