It's not uncommon for games to have an underlying message or philosophy behind the gameplay. For Spyker's arcade puzzle title, 3LIND game, that message is 'think outside the box'. Or, rather: 'think around the box, under it, away from it, then, when you think you've got the idea, back inside it'. In a, perhaps, intentional addition to the metaphor, your goal in each level is to reach each of the boxes as they appear. 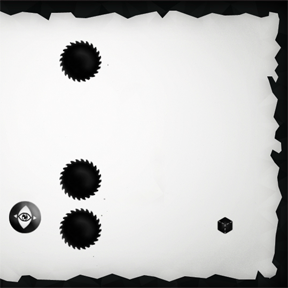 Use the [arrow] keys to maneuver your eye character around spikes, between sawblades and through a number of other obstacles presented in the 20 levels of the game. And just try your best not to be bothered by the fact that no matter where on the screen it goes it's just... staring at you. With eerie black and white graphics and a fitting soundtrack by Methamphetabear, 3LIND game is sure to have you wracking your brain over each level while considering yourself a philosophizer between them. It's a coffee break game that is short enough to counteract any frustration in the levels, so go ahead and give it a shot. Believe me: I know you wanna try it, you know you wanna try it, and I know you know that I know you wanna try it.

This is a gorgeous game. Sometimes the philosophy side of games can either feel tacked on as a afterthought or cheesy like a Hallmark moment. Other times the message is good but the gaming side of it suffers and feels like the same level over and over. This was a perfect balance of both. The last level was a nice challenge.

Just because it says THE END doesn't mean it is the end.

This was fun. The Antichamber influence is strong with this one.

Not a bad game, but it really needs a mute button. Yeah yeah, the music is part of the experience... Except it's the same thing looped over and over again. Besides that, it was pretty fun.

You cannot finish the final level without the sound on. In my case, I had to go back to level one to learn what to listen for, before tackling the final level.

how to go past that level where you're trapped in a square?

That was satisfying :) 5 mushrooms

This game was clearly inspired by Antichamber, which was pretty good. It did however have a bunch of really infuriating aspects. I strongly advise that whoever made this game watch this video on the difference between difficult and punishing games: https://www.youtube.com/watch?v=toVNkuCELpU . You'll note that Antichamber has no real complete fail state, the walls don't kill you, and walking feels right. 3LIND on the other hand often fails to even remotely give you an indication of what's what.

It's the level where the goal is encased in an invisible box. What do I do?

Never mind, I found a walkthrough. :)

If you can't pass a certain level then look up the walkthrough on youtube ;p.

In relation to what coronacoreanici said above that 3LIND fails to even remotely give you an indication of what's what... That is part of the game! Once you do figure out the rules for one level they change. You have to make assumptions and then alter your perception. I didn't even find this difficult let alone punishing. When the walls kill you it's not as if you have to restart from the beginning. The whole game should take less than ten minutes.

Dandy: I didn't find it challenging. I just found some of the levels and some of the irritating things the creator pulled just infuriating. The one with four appearing sawblades and

a giant finger that pushes you right into a godsdamned killwall

Irritating things the creator pulled? Like design puzzles? Maybe this game is suited better to people with modicum of patience. You know what I did after the finger poked me into the wall? I didn't go near the finger again.

I don't no why. This game is look like Antichamber

Very nice. I had no problems with the game play. Fairly easy and fun. I just am not a big fan of Zig Ziglar games. I don't play games to learn life lessons. Just me...I know others feel different.