7 Grand Steps is a new story-driven game from Mousechief, creator of the multi-award-winning Dangerous High School Girls in Trouble. It's a tale of growing and evolving, progress and struggles, families and histories, all told through the lens of a token-operated machine. In practice, 7 Grand Steps is very much like a board game fused with interactive narrative elements. And like any game of substance, just talking about its parts doesn't do justice to the whole. This game will reach out and grab you on a whole different level. It has this uncanny ability to make you feel for the characters, which is surprising seeing as how you're just dropping tokens into slots. 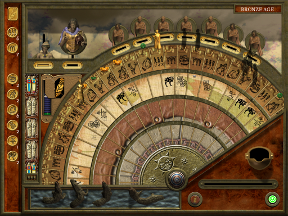 All of this seemingly complex storytelling neatly plays out on a glorious moving wheel driven by tokens. The wheel shifts a bit each turn, moving the people on it one step closer to their doom. You control two parents (and eventually their children) by dragging tokens into the slots beneath each character's portrait. He or she will then move to the nearest space that matches that token's symbol. Once a token is used on a character, their slot closes until the next turn begins. Along the way you collect beads, which adds to your family legends and gives you a better standing in the community.

But moving characters by dropping tokens is only the beginning. 7 Grand Steps is telling a story one turn at a time, and that story involves romance, children, old age, social climbing, rites of passage, warring kingdoms, epic challenges, and so much more. It's all very personal and very meaningful. It can become a delightfully complex game as you start getting into the intricacies of it all, but because 7 Grand Steps is driven by token creation and token spending, it never loses you in the process. 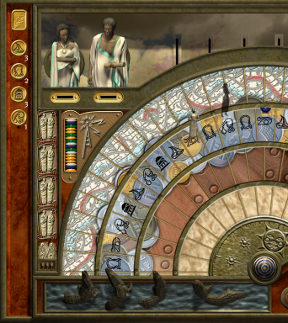 Each turn, you make tokens, take stock of your family's standing, then decide where to spend tokens. Subtle strategies form as you play, all in the name of gathering beads and furthering your family's standing. You'll learn which tokens to pass to which parent to maximize gathering. You'll figure out how best to train children's talents so they can pass their rite of passage and begin a new generation. You'll even use love to launch ahead of your neighbors in an attempt to thrive. And as you progress to the outer tracks on the wheel, tokens get more varied and the decisions you make more precious.

Analysis: As someone who is deeply interested in history, mythology and ancient cultures, 7 Grand Steps is nothing short of a magical experience for me. The awe and wonder instilled in each move, each age, each decision and each struggle is phenomenal. The emotions that are so effortlessly connected to these choices are just as well thought-out. Even if you don't give two shakes about history, this isn't a game you're likely to forget anytime soon. 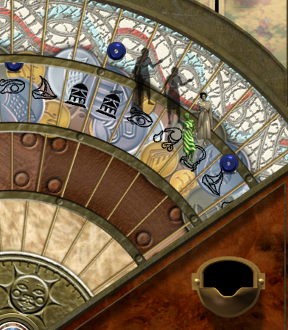 There are so many wonderful little touches in 7 Grand Steps we could sit and list them all day. You'll delight in the stories it tells as children grow up and look for love. You'll be shocked when random events occur, sitting and contemplating the actions you can take each time. You'll laugh at the descriptions when you mouse-over the crocodiles. And you'll feel all the more connected to these events because you're the one influencing them. You don't have complete control over what happens, which important to the emotional impact the game has, but you can sway things this way or that.

Half of the point of 7 Grand Steps are the discoveries you'll make, which is why we tried to steer away from too many spoilerish details in this review. Beyond the deeper meanings you'll find the game is pleasantly simple to get into, and the token mechanism is an extremely satisfying way to play. Text-based choice cards pop up often, narrating events in the family's life and giving you options to choose from that affect how each character grows. All of this happens quite invisibly, leaving you to sit and ponder how to spend your tokens in peace.

7 Grand Steps truly is a grand game, spanning ages of human life and telling stories with each token you drop. It's one of the most meaningful indie game experiences I've come across in a very long time, and that it's so accessible even to a casual player is nothing short of legendary.

Your links are broken! They're directing to /GAME_ID

Dangling participle: "As someone who is deeply interested in history, mythology and ancient cultures, 7 Grand Steps..."

Also, their site at www.7grandsteps.com shows a Mac version and demo, so update that when you fix the links.

Strangelander: JohnB's construction is perfectly natural, and I have the corpuses to prove it.

JohnB: Awesome. I picked it up on steam in the end. I'm actually fairly disappointed in it; the mechanics were the weak point in DHSGIT!, but this rarely became too frustrating as they were essentially story-rationing devices. With this, the mechanics are much more demanding of your attention and while somewhat more involved, still get quite tedious quite quickly.

This becomes most apparent in the ruling game (at least for the Bronze Age) which is a mechanical nightmare of opacity - I had frankly no idea what anything it was telling me meant, no way to really achieve most of my goals any better than tossing dice and it forces me to sit through a second of transition (sounds trivial, but it's so frequent) as the scroll comes out and then set the policies every turn.

This is even more of a problem because frankly, the narrative side is weaker. Procedural storytelling is a finicky beast, and IMO is generally worse than something told in a more restrictive format. You see the same stories again a fair bit, and the trees are both opaque and hard to really care about.

I sound like I hate this game, but really it's just mediocre, especially following the very tough act of Dangerous High School Girls in Trouble!

I got hooked on the demo so I bought the game. I have now gone all the way to the end before realizing that it is one of a long series (hence the SEVEN in the title.) At $15 a pop, there is no way I will buy the next 6 installments. The game play is fun but it's pretty repetitive, especially with the same stories over and over on the scrolls. Much of the game play is totally random which is frustrating trying to strategize once I got the hang of the game. After so many generations, it gets a little boring.