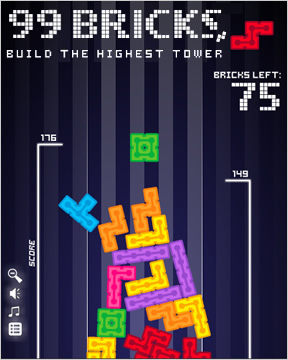 Right then, Tetris. You stack the bricks, the lines disappear, and the troika drones on in the background. 99 Bricks is a bit different, in that as the tetrominoes fall and stack, they don't disappear when lines form. This time, your goal is to make the tallest tower that you can. A higher tower means a higher spot on the leader board.

Just be warned though, your tower is not steady.

In a twist on the classic block stacking game, 99 Bricks challenges you to make a brick tower using standard Tetris play mechanics. [Left] and [right] arrows move the falling brick back and forth, [up] rotates the block, and [down] drops it. You're also given [Z] to zoom out and see the whole tower, and [C], which can throw out the current brick if you don't want to use it. What makes this game unique is that the playing field is not based on a rigid grid, like what you're probably used to. Improperly placed blocks can tip and tilt, just like a real (two-dimensional) block tower. You've got to plan ahead and make sure your bricks are structurally sound, more than just fitting into holes.

As soon as a falling brick touches your tower (regardless of which side), it's out of your control, even if it means your brick falls past another ten bricks straight down. It's possible to "nudge" a set of bricks with proper placement and timing from your current brick, but whether or not this is a good strategy is up to you.

Analysis: One thing that WeirdBeard has done with 99 Bricks is to bring to Tetris a very stark sense of realism. You no longer get that mysterious "floating brick" that most older versions of Tetris used to have, you now have a potential tower buster. Setting a limit of exactly 99 bricks gives a strangely comforting sense of closure to the game, because it's set in stone (pun unintended) when the tower-building will end, instead of blindly playing on for an eternity. And while the physics of this game aren't exactly perfect, let's face it, when was Tetris's physics ever perfect?

Your tower is complete... bask in its glory.

Cheers to Martijn and Lar for sending this one in! =)

wow first post :)
first timer for me lol
havent played it yet, but it looks a bit like tetris.
whats funny is that i heard about this earlier!
rite-o im off to play it :)

Fun twist on tetris. What bugged me was that, after the tower got high enough, it almost acted like there was a wind -- swaying slightly even though it was a solid, balanced structure. Once the sway starts, it's almost impossible to place new bricks with precision.

Well, regarding the swaying effect, I think it is caused by the large amount of weight of the tower. Every time you place a block, there is some pushing force as it lands, so even if you place your blocks seemingly perfect small cracks will start to form between the blocks. Now, if the tower is big, there are lots of blocks slightly pushing against each other due to gravity, and when the blocks brush up against each other and slightly hang over the cracks they become unbalanced. In conclusion, since the blocks don't get bolted or welded together like real buildings do, even a slight imperfection in block location causes a big difference in the tower stability.

I tried!...for about 5 minutes. Then I held the down button and watched in childish pleasure as the tower continuously collapsing upon itself.

This is the most creative variant of Tetris I've ever seen. Very enjoyable for a quick break.

I just signed up because of this game- that is to brag of my high score of 380. Anybody beat that? It's harder of a game than I thought it would be. That took 3 tries, but I have to sign up on kongregate to save scores there...meh.

My new highscore is 665! Mwahaha! Good game thanks for postin it.

This is awesome. A few years back I made a little Flash animation of Tetris blocks falling over just like in this game. I never published it because I planned on adding to it, but I always thought of how awesome a game like that would be...and now here it is! I'm glad someone out there shares my strange sense of irony.

blob said: "In conclusion, since the blocks don't get bolted or welded together like real buildings do, even a slight imperfection in block location causes the a big difference in the tower stability."

Well then explain why this swaying never happened in the original Tetris game??!! I never saw any "bolts" or "welds" in that game.

377 blocks! I even tried to make it like Tetris, making comments to myself that because it isn't exact, Tetris blocks are gonna rule the world! DeceasedCrab was right. They SHOULD make a Tetris Block horror movie.

418. I just stacked up bricks in a single pile as fast as I could, then just wasted the rest of the bricks when my tower fell.

Well, what I said was just a extension of what the post itself said "What makes this game unique is that the playing field is not based on a rigid grid, like what you're probably used to. Improperly placed blocks can tip and tilt, just like a real (two-dimensional) block tower. You've got to plan ahead and make sure your bricks are structurally sound, more than just fitting into holes." The original Tetris was not made with such a physics system. Anyway, fun game and funny comments:)

Cute concept and fantastic implementation. (I also like that 2 and Z both zoom out, for those perplexed by the ambiguities in the font. Smart catch.)

However, it suffers from Breath of Fire syndrome, in which simple boring repetition (like auto battle in the eponymous game) works about as well as actual strategy. In this case, I managed to break my high score (low 500s-ish) by just throwing out everything except the I blocks, and stacking them vertically end-to-end. It toppled eventually, but it was still sad to see my hard work from previous games beaten by a greedy algorithm.

Reece - You mean this movie?

487, woot! Fun little game, although after my first run through it I ended up just holding the "down" key, hehehe.

This game was good up until I found out the physics also kicked in when placing pieces. I found that after a few pieces shuffled, the game became impossible as the movement of the tower was fluid, but the movement of my pieces were confined to a grid. Oftentimes my pieces would just nick the corner of another one and cause my tower to fall over instead of the brick sliding in to form a nice tessellation. Oh well. It's still a nifty concept.

Stacking nothing but vertical "I" blocks will get you to about 500, but that's it. It always collapses about then. I even tried bracing the bottom "I" with some "L" blocks, but it doesn't seem to make much difference.

Frustratingly, my normal towers *also* collapse at about 500. I can't get the Dubai Badge at 600 for the life of me. Is there a trick?

I'm trying to overbuild the base width, seeing if that makes a move stable tower?

There must be a wind effect. I placed nothing but purple (horizontally) and green pieces, deleting the rest, with NO impact (that is, I got them close, then let them fall onto the structure) and the tower fell around 300. Multiple times in a row.

Finally got the Dubai Badge. For some perverse reason, my tower was rock solid at about 300 (even though I'd actually left a gap and an overhang in there.) I got two purples in a row, so I thought I'd try building Jonah's "I" tower with the 35 or so blocks I had left. I got a bunch of purples, and they all stayed upright until the very bitter end...

Oops, that should be:
http://s384.photobucket.com/albums/oo283/mattozan/99Bricks.png

I think I got over 1 thousand once but I might be mistaken..the highest score I got which I can remember is 706.

My high score was 449, with 8 bricks left. It was a perfect tower until the end when I started getting desperate!

It's not Troika, it's Korobeiniki!
Seriously though, like the game :D