If you haven't played To the Moon, the hit indie adventure game from Freebird Games, well, I just don't know what to say other than that you're missing out on one of the best stories you'll ever experience. The sequel is still a ways off, but A Bird Story may help make the wait a little shorter... a very little bit considering it's only about an hour long and billed as an "interactive narrative adventure", but when it comes to Freebird Games, every little bit is a treasure, and this is no different. Acting as a lead in to the upcoming sequel, A Bird Story tells its tale entirely without any words at all, and yet still manages to be funny and moving with ease as you follow the slightly surreal story of a lonely little boy who has more daydreams than friends. Most of your time is spent watching events unfold, but the game will prompt you whenever you have control to move around, which can be done with either the mouse or the [arrow] keys. When possible, subtle sparkles around objects will let you know you can interact with them. 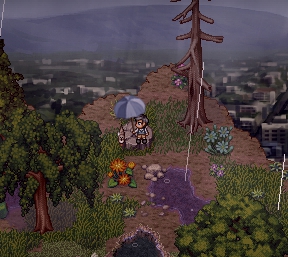 People, stop talking about how adorable and touching and thoughtful the latest Disney/Pixar/Game-of-Thrones-deathscene is and start talking about indie games, because they will blow everything else out of the water nine times out of ten. Freebird Games shows just how incredibly expressive and evocative "retro" pixel graphics can be by infusing an amazing amount of personality and emotion in its characters and scenes with tiny details, like the lift of an eyebrow or an awkward step away. A Bird Story is the kind of lovely and don't-want-it-to-end sweet that dreamy sighs are made for, and it's also remarkably funny with perfect visual comedic timing. The fact that it does all this while weaving a cohesive storyline out of a blend of surreal imagination and reality without a single word of dialogue makes it all the more amazing. Players expecting or wanting a more hands-on, explorative adventure experience might find the on-rails narrative and limited, infrequent control a bit limiting, but A Bird Story actually strengthens its narrative for picking and choosing when to give you control and how. Moments like being able to leap into puddles or jump up and down on a bed help you connect with your little protagonist, and better illustrate the way his life changes little by little, breaking out of a pattern, as the story progresses. The lack of an actual save function is mildly annoying, since while the game is split up into chapters you can jump to as you unlock them, you can't manually save your progress to a specific point to come back to later on.

Take that for the minor quibble it is, however, and instead believe me when I say that if you love emotional, personal stories, A Bird Story has some of the best storytelling and cinema you'll ever experience. It's the sort of game I feel comfortable recommending to just about anyone, one you'll want to come back to in the future like a beloved book or movie, and even if you haven't played To The Moon, A Bird Story stands on its own brilliantly. It marries whimsy and with the bittersweet the way few other stories can, lovingly crafted and rendered with a real heart beating at its core. Despite an increasing reliance on heavy symbolism in the latter half that can make some things hard to follow, its use of colour, sound, and style is downright masterful. A Bird Story shouldn't be missed, and is one of those rare experiences that makes your whole day feel a little lighter, and will make you very excited indeed for the upcoming sequel, Finding Paradise... no matter how far off its release may be.