A Good Snowman is Hard to Build

[December 2015: Now available on mobile devices!] A Good Snowman is Hard to Build, by Alan Hazelden, also available for iOS and Android, with graphics by Benjamin Davis and tunes by Ryan Roth, is a simple and cuddly little indie puzzle game that you just can't help but feel good about playing. You are a "monster" (if there was ever a critter deserving of fingerquotes around that world, it's this little fellow) who has a passion for building and naming snowmen and, as it happens, snowwomen, and luckily you've stumbled across a maze-like snowy park, where each area has its own puzzle and snowperson building materials... which is, of course, to say three snowballs and more of the white stuff. Using [WASD] or the [arrow] keys, walk into snowballs to push them around. Each patch of snow you roll one over makes the snowball grow one size bigger, and if you're at all familiar with snowman anatomy, you know you need a big one for the base, a medium-sized one for the belly, and a small one for the head. Because rolling a snowball over a patch of snow both makes it bigger and removes that bit of snow for the ground, figuring out how to get each portion of your snowman juuuuust the right size, and in position to push it on top of the other pieces in the proper order, is harder than it sounds. You can only stack a snowball on a larger one, and if the opposite side is clear, you can push the stacked snowballs to knock the one on top off to the other side. Hit [Z] to undo as many moves as you like, or [R] to reset the current area you're in. 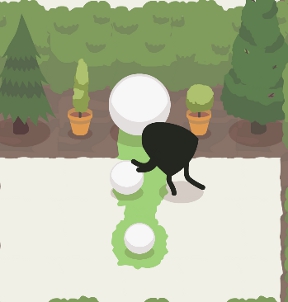 A Good Snowman is Hard to Build is an example of how a very straight-forward puzzle concept can suck you in if it's pulled off both elegantly and intelligently, and this game is definitely both. Each "level" tends to be small and carefully designed so the solution will have you smacking your forehead when you spot it, and eventually the game opens up a little so you'll usually have a few levels to choose from at a time. Movement occasionally feels a little kludgy, making it easy to take an extra step or push something when you didn't mean to, but the forgiving undo feature means this is never more than a minor annoyance. While its simple mechanics never really change beyond eventually introducing multiple snowmen, the difficulty is a gentle but noticeable curve, so that the smallest areas are usually the most challenging.

It really can't be overstated how beautiful this game is, how packed with unexpected dreamy charm and detail. Move your monster against many objects, from benches to hedges, and it'll interact with them in small ways. It may be as simple as leaning against it, or even dozing off, but all of it helps cement the whimsical atmosphere alongside the smooth visuals and atmospheric soundtrack that changes as you play. Subtle shifts in music as you roll the snow around or interact with the environment gives the game a real sense of life like few others. It's a smart game, but also very soothing, making it the perfect puzzle choice no matter what the weather is like. Despite its chilly setting, A Good Snowman is Hard to Build is one of the warmest and most welcoming little games you'll ever find, with the sort of impeccable style and sound that will draw you in and make you never want to leave.

A Good Snowman is Hard to Build (iPhone, iPad, ipodtouch)

A Good Snowman is Hard to Build (Android, Android Tablet)

I'm still not going to give much away here, but when you think you're done, go back to the start, head through the gate, and take a nap. I haven't finished this part of the game yet. I wonder what will happen when I'm done with it...

Someone has. ;) I tend to write as I play, and I was trying to come up with a way to discuss things without giving them away, even though mechanics are pretty similar, but unfortunately it looks like I didn't manage to get that across as well as I had hoped to while avoiding spoilers. Something I'll have to keep in mind going forward!

Ok, fair enough!
I wanted to make sure people know that there's more going on than first appears, because if it intrigues anybody over the line into buying the game, then that's my good deed done for the day. :-P