Chop! Chop! Chop! What's that sound? The sound of timber being harvested in Realore Studios' Adelantado Trilogy: Book One! The creators of games like All My Gods and Roads of Rome have done something special with this casual simulation/resource management game, adding some role playing elements and throwing in a good helping of originality. The Queen of Spain has appointed you, Don Diego De Leon, as adelantado of the new world, and it's up to you to find out what happened to previous expeditions that were sent out and never seen again. While you're there, find treasure to send back to fill the the country's coffers and best your rival Pablo Rodrigez to the gold and riches that surely rest in this unexplored land!

The first thing any good expedition needs is to be able to feed its workers. A handy tutorial gets you going in this game, starting with building a garden. The game is played entirely with the mouse, just click to place buildings, control your main character, and collect resources. With the exception of a few renewable resources that you must command your workers to retrieve, villagers will go about farming, mining or chopping on their own. You just need to make sure the workers have the buildings they need and that there are enough peons to attend the tasks. This gives you time to explore the map and achieve the goals for each level. There are various side quests to accomplish aside from keeping each community running smoothly. These generally consist of helping the natives, collecting gold, or rescuing survivors.

Analysis: The unique thing about Adelantado Trilogy: Book One that makes it stand apart from similar games are the RPG elements. Your character Don Diego has three stats that can be upgraded throughout each level by finding the corresponding magical stones. These are usually found by talking to characters on the maps and completing quests for them. You can upgrade speed, strength, and your oratory skills. Often, parts of the map are locked until you have upgraded your stats enough to enter a new area. It's fun to have a quest line to follow rather than just focusing on amassing resources! 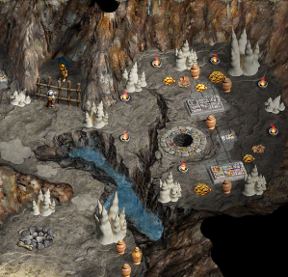 Adelantado Trilogy: Book One isn't about micro-managing, as in so many sims. It's more about macro-managing. Instead of controlling your workers down to every sneeze and cough, you're in charge of optimal building placement. Instead of clicking furiously to pick up resources, you're searching the world for secrets and treasure hidden around the map. It really adds focus to the sense of venturing forth into a new world as a theme of the game.

As with any game there are a few drawbacks, such as if you exit the game in the middle of a level your progress is lost. Saving only happens after level completion, so you'll need to be prepared to spend at least 45 minutes at a time to get through the large-mapped levels (which isn't necessarily a bad thing!). Similar titles have a mid-level save, so it's disappointing that it's not available. Also, during gameplay there's no way to knock a building down, so if you place it in the wrong spot, you're stuck with it. This can be worse than just visual incongruity, as resource output from buildings decreases over time, so you need to stick buildings close together to make sure you have room for the new ones.

Adelantado does a great job making you feel like you are among the first to set foot in a new land. The quests make it feel like you aren't just exploring for the fun of it, but are there for a reason. And the Spanish-inspired soundtrack is a delight! There are difficulty settings ranging from relaxed to hard, and ten huge maps to explore, plus a bonus map if you can complete the rest of the levels with a gold rating. Have fun treasure hunting!

Ok, I haven't checked out the game directly yet, but does the whole premise seem kind of problematic to anyone else? Maybe it's just me, but it seems like it would be very difficult to have a game set in a period of exploitation and genocide and be able to pull it off sensitively. Maybe this game developer actually manages to do that, but the description above saying that one aim of the game is to "find treasure to send back to fill the the country's coffers and best your rival Pablo Rodrigez to the gold and riches that surely rest in this unexplored land!" sort of waves a warning flag to me. Unexplored except for the millions of people who live there already, right? And who happen to be the actual owners of the gold and riches, right? Can someone who has played the game speak to this at all? Does the game seem like it's glorifying the conquistadors?

Instead of conquering the natives and stealing their gold, the game has you helping them - rebuild their huts, villages, and totems, finding "lost" things or people, etc. They reward you with gold or other objects needed to move forward in the game, or by allowing you into the next area you need to get to.

While you have a sword, thus far it's only been used to smash barrels, pots, and bushes - no people (I'm only about 1/3 way through, so I don't know if that will change later on in the game). The only "skill" that's necessary to "upgrade" to interact with the successive natives is Oratory.

This is definitely not "The Seven Cities of Gold."

While there are "skills" that get "upgraded", I would not characterize this game as having "RPG elements" at all. You don't advance in any experience levels and then choose or are awarded with an upgrade. You simply gain those upgrade stones either through completing tasks for natives, or finding them in barrels or pots. Also, once you finish that chapter, though, your "skills" are downgraded to level 1 at the start of the next chapter.

I agree with the drawbacks - the lack of mid-level save is a major one, which I didn't find out about until after I bought it. I hope the developers take note of such feedback for Book Two and Three.

Is their anyway to go back and upgrade buildings on levels you already Beat?