Inspector Poirot is on the case again! Detective novelist Ariadne Oliver suspects that a murder may be committed at her high-society murder mystery fête. Sure enough, instead of a girl pretending to be a corpse, an actual corpse appears, which really casts a pall over your evening, let me tell you. It's up to Poirot to determine who is innocent, who is lying, and who is a murderer in the third entry in the series of hidden object games, Agatha Christie: Dead Man's Folly. 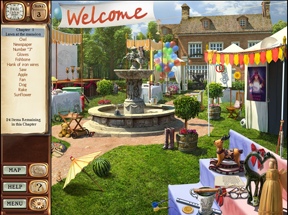 Each Agatha Christie game is like stepping back in time to a refined and glamorous age where gentlemen in natty suits drink martinis, cigarettes are in holders, and stories are written on typewriters. Dead Man's Folly, like its predecessors, is careful to preserve the right atmosphere in both time and place. A "football" clue will lead you to what we Americans would call a soccer ball, and you're not going to be looking for cell phones, computers, or anything else that wouldn't fit the time period.

When it comes to the gameplay itself, expect a pretty standard set of hidden object conventions where a laundry list of items and your cursor are your best friends. Each scene is on a (rather generous) timer, and too many mis-clicks in a row will nip a few seconds off the clock. There's no timerless relaxed mode to play, so, you know, keep your eyes peeled and go easy on that mouse button.

In addition to picking up footballs, pipes, fish, butterflies, and pocket watches (apparently our detective Hercule Poirot is a compulsive tidier), you'll also be looking for clues to solve the murder mystery. Unlike previous Agatha Christie games, the connection between the object you find and the clue you are given isn't always parallel. Sometimes it's just a random item, which puts a bit of a kink in your plans if you were trying to solve the mystery on your own. 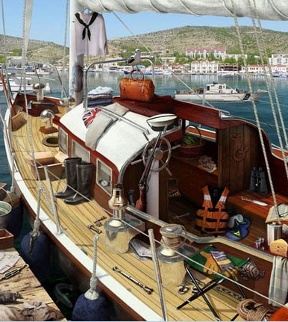 Analysis: As a hidden object game, there is hardly anything to complain about with Agatha Christie: Dead Man's Folly. The presentation is great and the interface is smooth. While there are a few small-sized plot-important items (maybe one per level), the majority of the objects are clearly drawn, requiring no eye straining or pixel hunting to find. There's also a good variety of scenes within scenes to uncover as well as my favorite hidden object feature: manipulating objects on the screen, such as returning bulbs to a chandelier.

Dead Man's Folly's plot suffers in comparison to its predecessors, and I'm not sure why. I know it can be difficult to come up with a good story for a hidden object game, but in this case the work was done for them — just use the book's plot! The story in the game is doled out so sparsely I hardly knew any of the characters. Several times I received a clue card and had to search my memory to figure out who this person was and why the clue was surprising or important. This could have been alleviated by including a journal or something, but I think the fundamental problem is that the cut scenes don't do enough to tell who the characters are and what they care about. It's hard for you to determine who the murderer is when you don't know people's motivations.

While Agatha Christie: Dead Man's Folly isn't up to the same standard as its older siblings, it remains a fully competent hidden object puzzler. Gamers who don't care about plot will have a great time despite the shortcomings in the storytelling department. For everyone else, you'll have fun, but it's sad to think about what this game might have been.

Agatha Christie: Dead Man's Folly is available to download from these affiliates: