Alabama Smith in
Escape from Pompeii

Alabama Smith in Escape from Pompeii is a new adventure game that builds inventory puzzles into a hidden object-style interface. You play the young Alabama Smith, an archaeology student who has just been given the opportunity to study in Naples. His mentor tells him of a mysterious amulet buried in the ruins of Pompeii that is rumored to grant the owner the ability to travel through time. 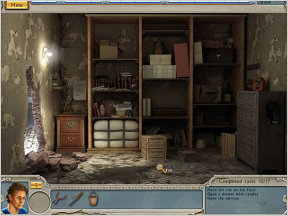 The adventure begins in the university library with one seemingly not-so-simple goal in mind: find a long-lost hidden room. Surprisingly, a few clicks later you'll be staring down its dusty staircase and into a forgotten chamber. Making your way there is a simple matter of solving puzzles by finding items and either combining them in your inventory or using them directly on objects in the scene.

One key difference between Alabama Smith in Escape from Pompeii and most casual adventure titles is this game spells your tasks out on a list at the bottom of the screen. Instead of blindly fumbling for items and ways to combine them, all you have to do is check the window next to your inventory and try to accomplish the tasks listed, usually in order from top to bottom. While this does take some of the oomph out of the adventure, casual players will appreciate the light hand-holding.

An interesting option available early in the game (which can be toggled between levels) is the choice between Casual and Expert mode. Expert is more like a traditional adventure game where you look for items and figure out how to use them with the puzzles at hand. With Casual, however, you're presented a list of items to find (much like a hidden object game) along with additional in-game hints and the ability to skip mini-games. The choice is entirely up to you. 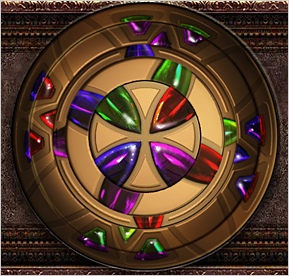 Analysis: Simply dropping the word "Pompeii" in a game's title will immediately conjure epic images in your mind. Alabama Smith had me from the title screen, and its simple combination of item puzzles and no-frills storytelling was just enough game to keep my attention the whole way through.

Here's where Alabama Smith in Escape from Pompeii starts to stand on shaky ground: puzzle construction. I mentioned earlier that your tasks are listed at the bottom of the screen. While unconventional for an adventure game, it's an acceptable solution to make the game more accessible to casual players. But even with things spelled out in front of you, you'll still have to resort to the hint system in order to get things done. This is purely because a handful of the game's puzzles make no logical sense.

Most adventure games (especially interactive fiction) relies on the player's ability to see a game world and extrapolate uses for the items provided in the scene. Alabama Smith encourages just the opposite, however, and wants you to stick to the list and keep your creative instincts to yourself. It feels a bit stifling to an old-school adventure gamer like myself, but I still found plenty of enjoyment in completing puzzles and working my way through the story.

Alabama Smith in Escape from Pompeii sets its sights high and wants to be listed amongst the best-known casual adventure games. Even though the story is interesting (if a tad contrived) and the game mechanics themselves easy to use, more logical puzzles and less reliance on lists would put the final level of polish on the title that would make it outshine most games of its genre. As it stands, however, you've still got a grand adventure.

Take the bulb, that is laying on the lowest shelf left

Click at the opening on the floor (where you had the puzzle before) and place the bucket with the water on it, when the pop up window opens

The last hour - In front of the prison: Present and Past

The time travel starts. By clicking the amulet you change between past and present. Start in the present

In front of the prison - past

The last hour: Inside prison - Present and Past

The last hour: The Cells - Present and Past

Before you can lean back and enjoy the finale, you have to clean up

Thanks so much to Kayleigh for doing this walkthrough! You rock!

I played this last weekend, and while I love that I'm seeing more games that incorporate point-and-click adventuring, this game could have been a lot better, and felt half-finished, most obviously in the fact that it is really short - I think I got through it in about an hour and a half.

The story is more or less forgettable (or at least I've forgotten it since playing a week ago), and from what little I remember, it didn't conclude in any satisfying way, contributing to the feeling that this was only half of a full game.

What I liked - the time travel concept: being able to see a scene in two points in time, and how that was incorporated into the puzzles.

If you have a Big Fish credit to burn, I'd recommend the new Nancy Drew Dossier game instead, which was a bit longer (~3 hrs), has a very similar style of gameplay (single track adventure, with minigames), but is much more engaging from a storyline perspective, and felt like a much more complete game.

I played the demo version, that I think it's the full version with a time limit.
I got as far as

putting a purple gem on the first part of the amulet. I was almost turning the engine on

For the part I've played, I thought this game to be very good looking. But some of the puzzles are really arbitrary. But even more arbitrary are the puzzles in form of minigames. Easy ones! wich reminds me of those educational games.. 'Help barney paint his fence. We want a light purple fence, but we dont have this color, only those buckets over there. Can you mix them up to make the apropriate color?' Memory games, jigsaw, slide pieces.. kinda fun, but take the played totally off the story.

But none of this is really a critique, as it was the choice of the makers to do so. Personally, I think it's a very nice game! I had a good time playing the demo. But probably not to the anyone older than 14.

Just too short and too easy :(

Wow. I also found it to be way too short. I was shocked when I got to the end and thought for SURE I was just missing something. In a way though,being short was a good thing because then the horrible game was finally OVER. I felt that the puzzles didn't seem to "flow" very well and I quickly lost interest. At first I was excited because I too like the latest point and click type hidden object games, but that quickly changed. Matter of fact, I got so bored with it, I quit playing after a short amount of time and came back to it several days later to finish. I wish I would have went ahead and finished it the day I bought it so I could have asked for a REFUND, now too much time has gone by. I was very dissapointed.

ON A POSITIVE NOTE:
Thanks for your great site. I always know I can come here to find the tips I need on the newest games. It is nice to get a hint with the option to know more or to get just enough to get you passed the trouble spots! GOOD JOB!

I just finished playing this game...But silly me, to save time I had been forwarding through some of the dialogue...At the very end, after finding/saving Alabama...All I read was something about 'how could you betray me', and I clicked 'skip' so now I don't know the rest of the story...Can anyone tell me what happened?? The game itself was not very challenging, but I have to agree with those who said that all of the puzzles made sense. It was fun regardless, though.

In shortform: Daddy was the bad guy behind everything - Alabama was in danger to get killed by Daddy and had to escape into the past.
The girl (sorry, forgot her name) followed him - The END (and room for a second part ;))

what is the code for the combination lock when you are in the prison cells place :( I can't get past it

I know what the code to the safe is but I can't get it to work. Can someone help?

@Jan
Unfortunally a lot of people had this problem. When you are sure ,you placed the dials in the right positions and it still does not work, than you probably have kind of a glitch.

A few people said, that it helped starting the game all over, the second time, they did not have the problem. But it's of course a shame, as you are not far from the end :(

Sorry to have no better news
Greetings, Kayleigh

We seem to have forgotten to post our walkthrough for this game. If you're here looking for one, I'm sorry!

Take the bulb, that is laying on the lowest shelf left

Click at the opening on the floor (where you had the puzzle before) and place the bucket with the water on it, when the pop up window opens

The last hour - In front of the prison: Present and Past

The time travel starts. By clicking the amulet you change between past and present. Start in the present

In front of the prison - past

The last hour: Inside prison - Present and Past

The last hour: The Cells - Present and Past

Before you can lean back and enjoy the finale, you have to clean up

Thanks so much to Kayleigh for doing this walkthrough! You rock!

[Edit: Thank you. :) For game suggestions, please use our game submit form found in the menu above: https://jayisgames.com/game-submit/ Cheers! -Jay]

Can someone please tell me the correct code for the safe? I'm stuck at that point
Thanks

i don't understand why i can't finish the game,they keep saying maybe a glitch also that i have to find fingerprints not sure what is going if anyone has any solutions please respond and if allowed can you email me either way greatly appreciated thank you