Alabama Smith in the
Quest of Fate

It had to be tough growing up with a name like Alabama Smith. I'm sure the mullet jokes practically wrote themselves. But somehow the kid named after the 22nd U.S. state made it, growing up to become a successful archaeologist. Now, following Alabama Smith in Escape from Pompeii, the time-traveling ruins scavenger has returned in Alabama Smith in the Quest of Fate. And this time he has to stop a mysterious nemesis searching for magical relics in Peru! 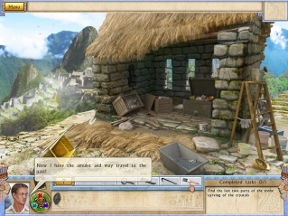 Alabama Smith is built on an adventure game skeleton, making its central focus exploration, inventory management, and puzzle solving. Most of the tasks you'll complete involve finding lists of hidden objects, making it a fine example of a hybrid casual game. Tasks appear at the bottom right corner of the screen, listing items you need to find, places you need to visit, and other jobs you need to get done. To the left of that you'll find your inventory, and the bar at the top of the screen shows you what items can be found in your current location.

The first few minutes of the game illustrate well what the rest of the game has to offer. Alabama receives an e-mail asking him to gather the relics he's been studying and travel to Macchu Picchu. Can you guess what your first job is? Find all 12 Incan statues! It isn't as easy as studying pixels and clicking in the right place, though. To grab all of the items, you'll need to unlock doors, pry open boxes, reach high ledges, solve mini-games, use items from your inventory, and dig around several rooms to find everything you need.

A forgiving hint system makes the sometimes obtuse puzzles more bearable. Clicking the "?" icon shows you where an item is located, and if it's in another room, it leads you out at no cost. Hints recharge after just a few seconds, so if you feel stuck, don't hesitate to give it a click. 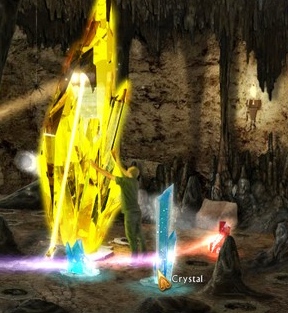 Analysis: Alabama Smith in the Quest of Fate takes a refreshing turn away from hidden object territory with its strong adventure slant. Inventory puzzles are where the challenge rests, and you aren't punished for mis-clicks or for using the hint button. This is not a game about getting a high score because you saw the camouflage snake hidden in the background faster than everybody else. This is a casual adventure game with real puzzles to solve.

Visually polished and a smooth experience to play, I couldn't help but notice the same faults present in the original game were repeated in the sequel. Puzzle construction often lands a bit on the "what?" side of things, making the hint system almost necessary to complete some tasks. It's nice to have your objectives spelled out at the bottom of the screen, but when the steps to completing those objectives don't make sense, you might as well abandon the list and let us try on our own.

Regardless of a few puzzle-related fumbles (and the fact that Peru isn't as epic a setting as Pompeii), Alabama Smith in the Quest of Fate manages to pick up the ball and score. Even though it's more adventure than it is hidden object, fans of both genres will find something to love in this well-made game.

Alabama Smith in the Quest of Fate is available to download from these affiliates:

Alabama Smith in the Quest of Fate-Walkthrough

Chapter 3: The temple of sun

Chapter 4: Mystery of the Incan Letters

Past: Tomb/House of the Guardians

Chapter 6: The Crystal of Fortune

Temple of the three Windows

Past: Temple of the three Windows

Past/Present: Hall of the Crystals/Temple of the three Windows

Present: Temple of the Three Windows

Past: Hall of Crystals

Special thanks to Kayleigh for writing this wicked awesome walkthrough \o/!!

Cool. I wonder though... is Alabama Smith a reference to Paganitzu, or is it just some really bizarre coincidence?

Actually, I believe it's a spin-off of Indiana Jones...

Alabama Smith in the Quest of Fate-Walkthrough

Chapter 3: The temple of sun

Chapter 4: Mystery of the Incan Letters

Past: Tomb/House of the Guardians

Chapter 6: The Crystal of Fortune

Temple of the three Windows

Past: Temple of the three Windows

Past/Present: Hall of the Crystals/Temple of the three Windows

Present: Temple of the Three Windows

Past: Hall of Crystals

Special thanks to Kayleigh for writing this wicked awesome walkthrough \o/!!

hmm..the lfr directions dont seem to work for me..is there something i am missing (for the laybrinth)

The trick is, that you have to use the compass.

Normally, when we hear/read north, we go forward, west is left, east right and south is back.

Also I have to agree, a few times it "felt" for me, that i was going into a direction and next step was going back, but it never was like this. As long as you see a green circle around the direction, you are on the right way

[Fixed! Sorry about that! ~Kero]

In the end I did not like the game for 2 reasons: there is quite a lot of walking between scenes or between times trying to find that missing item and clicking everything. In general I try to avoid using hints as I feel those are sort of last escape when you get stuck but in this game, I was using hints all the time. The fact that items without actual interaction look exactly same (names and such) does not help either.

And then the minigames. Yes, I am too bored of the usual "memory game" and "put pieces back together" types that haunt almost every HO game. This one presents new types of minigames, sadly several of them are so difficult to understand and solve that not to click skip button takes a lot of willpower. Even when I understood the idea of how to solve it, actual process took so long and was so boringly slow that I gave up on many of the minigames.

Games from Natalie Brooks series are much more enjoyable because they are much easier and do not make you feel dumb. This one is very difficult and not in a good way, its illogical and confusing.

Help I cannot figure out the paint colors on the stone carving. Is there a screen shot?

help i cant figure out how to break the well in the hall of crystals?

Could anyone please provide a list of the mini-games available, as I have not managed to achieve this trophy, despite playing in expert mode whereby I should not have missed any (mini-games)? (This and 4 hours are the only trophies I am missing)

Great Game!! But I'm stuck with a capital "S". I'm in Chapter 4 - 2nd LAB sequence. I've cleaned the tiles with wet cloth and need to go to the book - left side of screen - to get the formula to really clean the tiles. I've clicked in every possible place on the 'textbook' but nothing happens. I either have the wrong book, or there's something wrong with my game. Any help appreciated! Thanks