Albatross18: Realms of Pangya is a free downloadable, massively multiplayer online (MMO) golfing game for the PC/Windows. I know what you're thinking... MMO golf?! Well, its not so hard to imagine, is it? 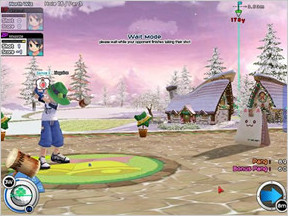 In Albatross18, you can create a customizable character from dozens of different base characters, clothes and even golf clubs, with more being released every week or two. You can even buy caddies(!)

Game mechanics are simple enough for anyone to understand and similar to those seen in home console golfing games. Hitting the space bar activates your power bar, which then returns across the screen to be hit a second time, determining your accuracy. Hitting the accuracy bar just right allows for a special "Pangya" shot. Pangya shots have the utmost accuracy, and allow for special button combinations to be made for extra range, among other things. If you make a lot of good shots, your power meter fills up allowing you to make, guess what, power shots! Power shots are sometimes crucial to special button combination shots.

To separate it from other golfing games, Albatross18 introduces fun items like "Nerve Stabilizer" which slows your power bar as you make a shot. Or a wind stopper to reduce the wind to 1M temporarily.

Other items include clothes, which although they are fashionable, can also augment your stats to help you along the way. Need some extra power? Save up your Pang and get those shoes! You can also buy special balls, Phoenixes, which have their own special abilities when used.

Albatross18 also sports fun and imaginative venues to play on. From the beginner stage "Blue Lagoon", to the super hard "Sepia Cannon"! (Currently not available in US version, though coming soon.) It requires a free sign-up to download the client. Sign-up takes less than a minute and play is free! Hope to see you all playing :)

Analysis: This is one of the first games in what is looking like a wave of casual oriented multiplayer games. The game has a strong console game feeling. It's mostly reflex based, with some strategic planning (don't forget to look out for the wind). On that note, it's easy to pick up and easy to play. The players are generally either silent or friendly, so there is certainly a social aspect to the game, especially since there is no real option to play solo. The closest thing to solo play is that you can play in 'family mode', which means hot-seat with all the items you have on your character. I didn't really mess with it, but I imagine this would be fun if you have a few friends over that you want to play the game with.

There are a few features of the game that are worthy of nitpicking. Character progression is relatively slow, but you do level up over time, and as you improve you will gain pang as increasing rates. In addition, it is possible to invest 'real world' money in buying items. So you can end up playing with people who have an advantage because they were willing to sink in the cash. However, due to this being a skill based game, and due to the fact that you do have the same opportunity to get roughly the same quality of items even if you don't pay (it just takes longer if you're not willing to pay), it shouldn't be a show stopping issue.

The game itself, once installed, is very casual friendly. It's possible to load it up and play anywhere from fifteen minutes (2 person and 3 hole games) to a hour or more (4 person and 18 hole games). I recommend trying to either start or join games that only have 2-3 players, as the more players you have, the longer in between turns you have to wait. So unless you really want to play with a group of friends, the best way to keep the games short and the play time high is to play with a smaller group of people.

In conclusion, the registration and client download might be a barrier to some. However, a quick and simple game mechanic coupled with character advancement and customization, not to mention a healthy amount of socializing, makes it an appealing way to spend some gaming time. If this sounds like your sort of thing, head on over to the Albatross18 website and try it out for yourself. Click.

What's up with all the downloadable games lately?
To me, there's something less casual about downloadable games than one might want from Jay's normal casualties. The minute I have to download and install something on my hard drive I get that twitchy IT-Department-Big-Brother paranoia.

Thanks for your feedback, Daniel. Truth is, with the explosive growth of the casual games industry there are many more excellent games available, and some are available as a download only.

And while some people have no problem with downloads, I recognize that there are visitors, like yourself, that would rather not deal with the additional effort (and risk) of installing new software to play.

Therefore, I am very busy preparing the next iteration of this site that will, among other additional features, allow you to view only the types of games you are interested in when visiting here.

In the meantime, please pardon our 'dust'. =)

jay while i do like some downloadable games, and havent played this one yet...it is 161 MB...i mean thats a lot of space...im not sure how much a normal game takes and for all i know it could be worth it but wow...its just more than i expected

As something of a side note (and relating to the point that Daniel brings up). If you click on the button on the lower left of the website, titled 'mini albatross', you can play a pared down browser based version of the game.

Wewt! Got some work on here! :D I'm glad you had Andrew add the extra info. When I wrote it myself I was half asleep and made it more of a suggestion than a Review. Nice work :o

This is great! Reminds me of gunbound, it's beautiful, simple and very addictive.

After months of a truly dangerous addiction to World of Warcraft, I swore off MMO's forever. This one is getting me back. Friendly people to play with, fun holes with decent mechanics, and I can play a few and still remember to feed the dog.

Even if I never shell out the cash for any of the upgrades (which I won't), I'm still going to have a good time playing. Thanks again Jay for the great reviews.

Good to hear that Clark! I too recently recovered from severe MMO addiction. I was abit unwilling when starting A18... but I find I'm not playing every moment of that day =)

Really fun game. Like q'ster said it absolutely reminds me of gunbound and its worth the long download. And its infinitely small compared to full release games which are now averaging gigabytes of install data.

Hey Jay.. Very nice comment about A18.. as a fellow A18 player, I think your comment was on the money. If you can, visit my blog and give me some feedback. For those people who thinks this game takes a lot of space or takes too long of time to d/l, it really doesn't. It only took me about 15 to 20 mins to download with dsl.

I downloaded this game based upon the recomendation and I have loved every part of the game. Not only is it challenging to play but it allows you to be interactive with others from around the world. The American version of this game is from similar servers located all over the world. If you enjoy easy game play and meeting people then it is worth your time.

bryan,
169 mb isn't all that big (I mean with how big most downloads are now). 160 on my computer is only about 1 hr. at most.(ussually 45 mins.) so either your computer is really slow or has a tiny harddrive, because it's not that big of a deal

I can't seem to register. I get a little 404 page within the frame of the site...
Any ideas?

This is due to the fact that the company that hosts Albatross18 didn't change/forword all the pages, and surprise surprise the link on this page goes to one of the old pages. Just delete everything in the address so that you end up with only www.albatross18.com and you will be okay. Just double check and make sure that it says season two.

Thanks, Anon. I fixed the links.

andrew you also forgot to mention evn a rookie f(newbie) if hes half decent at golf to begin with can compete with a junior and some seniors. even if you dont place first you still win exp and prizes . it has a cute anime feel and awesome graphics. and unlike some games ive come across, ddo online yugioh online the people there are generally nice.its one of them game sya dont mind a 10 year old logging on and playing.
(who can be mean with cherubs in thier face).
good review though and glad someone actually played it before they opened thier mouth about it... kudos
chaosjaye man not a myth:)

About the size ..
It only took me 10 minutes to download and these days when you buy a computer there alot of space 160mb is not a big deal my pc is a few months old and it came with 200 gigs ..... it is well worth the little wait and little space it takes.

I didn't even realize this had been posted here. I found out about it through an artist friend.

If anyone here plays, I'm usually on in the evenings (if I'm not drawing or rearing children.) I'm xadrian, or >pjack

I've been addicted to this game since March of 06. I'm not terribly good, but I'm Senior A now, so I'm at least persistent.

I still play this darn game.

We're now into season 3, with more courses and stuff to acquire! I love this game, even tho I suck - badly! It's worth the download, and is great for filling in a little spare time =)

this one is now available at ntreev.com play it love it pangya!!!