All We Need Is Brain 2 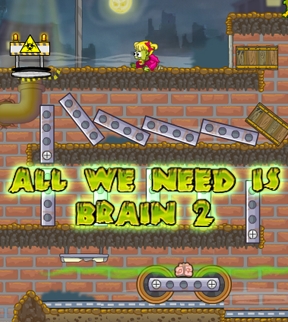 It's inevitable; when zombies take over they will eventually end up in the cities, and then you have problems. Why the people who inhabit this world thought that what didn't work the first time would a second is a mystery. However, it does give the rest of us an excuse to have fun at their expense. With your pile of brains, it is time to send more of the undead to their watery doom in All We Need Is Brain 2, a great puzzle game from VladG. If you haven't tried the first game, best start there. This sequel was made for the fans who went through the rigors of disposing zombies with the smell of mental mush. Each level is a puzzle where the objective is to lure the one or more zombies out of the ground and into the water (or on a mine or in front of a firing squad). This is done by placing a limited number brains in tactical positions, guiding the zombies to your bidding and their doom. Thoroughly addictive and creative, it's a different take on the genre.

This sequel, at first glance, doesn't seem very different. In many ways it is not. There is a new shine to the graphics, but you have to compare the two games side-by-side to really notice it. The menus are pretty similar and, apart from an intro sequence, you might think nothing has changed. But once the game gets past the formalities of a few tutorial levels, it cranks up the challenge level. The theme has shifted to an urban environment where zombies are literally coming out of the sewers, and all this brick and steel is used to an impressive (and often confounding) level. Timed drops and lateral thinking are hallmarks of "phuzzle" games, something the first in this series loved to dish up for players. The sequel takes it all that step further.

To help break up the puzzle-ness a bit, new shooting levels have been added. In these you kill the zombies by shooting them, but you need to do with the lights flashing or off. These are a bit of a mix; they interrupt the puzzles a bit much (especially if you get stuck on one), but they are also a fun diversion from the brain-churning the other levels unload on you. To be clear, this is not some damningly hard game. But All We Need Is Brain 2 does pick up where the first left off and it does everything just that little bit better.

Play All We Need is Brain 2

All We Need Is Brain 2 Walkthrough now available!

We're back and we are starvin' for your heads.
So come along and feed these poor undeads.
They're no way to defend,
So just give in to this tasty end.
It's easy!

Of your brains, our stomachs will be full,
By the end of this spooky sequel.
There's nothing you can say,
To make our hunger go away.
It's easy!

Enjoyed it a lot more than the original. All the puzzles were clever and well-planned out, and there were only a few were I was just getting frustrated on the timing. Finished with all but five of the coins - on a few of those levels, I just didn't care enough to get 'em. 4/5, though.

by bouncing the second brain off the barrel just after if falls off the first ledge.

However, I can't finish the level since

the barrel smashes both brains (if they don't explode a land min first).

Finishing without the coin is easy.

This is a great game, even better than the original but like that over too soon. The puzzle elements are outstanding and could be used to create generate dozens of even more fiendish problems. It's crying out for a level editor.

Finally beaten level 11 including getting the coin

Bounce a brain off a brain while they're sliding down in stead of using the barrel. Little luck with needed to get one not to drop on a mine.

I need to get the cart with brain steady on level 8, any help?