Yesterday, Rune Knudsen's biggest worry was completing his research papers. Or maybe it was the not-quite-so-joking mild hostility from one of his teammates... or coping with his seemingly one-sided attraction to one of the others. Rune certainly wasn't concerned about something dark and malevolent turning its eye on the isolated Greenland oil research station... but he should have been. Alpha Polaris by Turmoil Games is a point-and-click horror adventure that takes a slow burn approach to its setting and storytelling, but if you're willing to sink the time into it you'll be rewarded with a creepy evening's worth of entertainment. 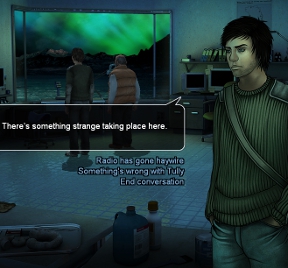 Alpha Polaris is, for the most part, a very traditional point-and-click game. As Rune you'll explore the station and surrounding area, solving puzzles and completing various tasks. Items are stored in Rune's satchel, which appears at the bottom left of the screen, and clicking on it will open it up to display your inventory. Clicking on Rune will tell you what you should be doing, but for the most part you're rarely given any real direction to go about how to solve a particular obstacle, and you'll need to experiment with both your environment and inventory, as well as pay close attention to Rune's notebook which usually has clues hidden within the seemingly innocuous text. When speaking with people, you'll not only sometimes have the option to decide both what Rune says and how he says it (the difference between "Yes, I'll do that" and "I'll do it, but I hate your face"), but also to "suggest" things to various characters by actually typing things into a text box. You can save at any time, which is both useful and advisable.

Analysis: For being Turmoil Games' first release, Alpha Polaris looks and feels extremely professional. The whole thing is fully voiced, with solid performances across the board, and the soundtrack is fantastically atmospheric in a way that few games manage to pull off. While the actual character models are fairly expressionless, however, the character art picks up the slack; the portraits used to depict each character change depending on situation and mood, and the art is beautiful and expressive. This, as it turns out, is a good thing since given how much emphasis is placed on character development and dialogue, you'll find yourself staring at those portraits for a long time. In fact, for most of the time you'll do more talking to the other people at Alpha Polaris than almost anything else. At least you'll get some beautiful scenery to admire while you chat. 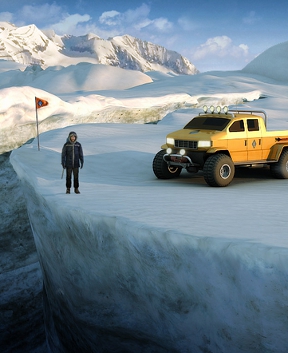 Alpha Polaris, unfortunately, has a rather frustrating case of Adventure Game Logic going on. Puzzle solutions are usually extremely specific and sometimes overly complicated, but if you can't figure them out well, you get to cry about it because apparently guidance is for babies. The other issue is that Alpha Polaris is just slow. When it finally starts roaring along on all cylinders it does deliver a wonderfully creepy and mysterious experience but it takes so long to get there you'd be forgiven for getting a little impatient. It's like someone interrupting your Stephen King novel (you know, when he was good) to make you read a brochure on scholastic opportunities in Antartica every fifteen minutes. "Come to scenic Greenland! Make dessert! Mess around with obtrusive tracking equipment! Enjoy the veiled hostility of your coworkers! Take your sweet time walking everywhere!"

At anywhere from three to four hours, Alpha Polaris is actually fairly short, and honestly feels like it needed to be half again as long to give more focus on the malevolent force influencing the station, and it sort of feels like all the interesting stuff that would have heightened the creepiness and anticipation happens when Rune isn't around. Still, Alpha Polaris is by no means a bad game, and in fact it should be taken as a mark in its favour that I wanted more time with it than I got. The story is creepy, the environments are occasionally breathtaking, and the work and love put into this project is evident in nearly every scene. If you're looking for a unsettling evening of ice, murder, and monsters, you should definitely check out the demo and keep your eyes on Turmoil Games in the future.

Didn't work for me (though I've got windows 7). Full-screen mode refused to start, and window mode means that important features are outside the screen. Too bad.

Hi vederblich. I've also got Windows 7 and I had no issues playing the game at all. Have you updated your drivers and made sure you meet the game's minimum requirements? Sorry you're having trouble. :(