Developing sequels to racing games can be a tricky proposition. Once you've added more cars, more tracks, and Waluigi, where else is there to go? Fortunately TurboNuke knows how to do follow-ups right, and the result is American Racing 2, the much awaited sequel to last year's hit first-person racing game. Gentlepeople, start your engines! 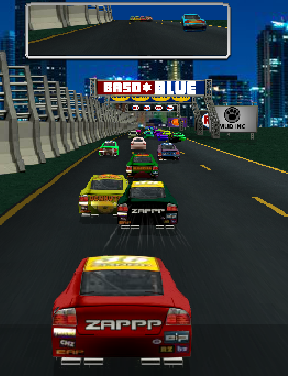 The gameplay mechanics should be familiar: Select an event on the calendar with the mouse, and you'll be transported to the track for a rolling start. Using the [WASD] or [arrow] keys accelerate, brake, and turn left and right as you speed around, advancing upon your opponents. Guiding yourself behind an opponent will grant you a burst of speed from Drafting, as well as adding to your Boost Meter. Your boost can be activated with [X], [Ctrl], or [Shift]. Most of the events are standard "so many laps against so many opponents", though there are also challenges like running over a certain number of boxes, or forcing an opponent to spin-out before time runs out. Each event has requirements for clearing or getting a gold medal. Completing events and damaging opponents during a race grants you cash which can be spent on upgrades for your vehicle. New events are unlocked as you clear races, leading up to the overall championship at the end of the season. Finish all the events, and you unlock the friggin' rocket car. So you've got that going for you.

American Racing 2 has the usual assortment of new races and whistle-bells (including a rear-view mirror!), but TurboNuke has clearly listened to the feedback from the original, and has given their racing engine a good tune-up. Race fans should appreciate how upgrading tires now also improves your car's handling, making precision driving challenges much less frustrating. It's a little more CPU-taxing this time around, which is a shame, but overall American Racing 2 should more than satisfy your daily recommended need for speed.

Wow. Is it just me, or is this really hard? I can't get past the qualifying heats of week 6.

Possibly because the AI is a TERRIBLE cheat. Any rule that applies to you doesn't apply to any of the AI drivers.

As a general hint it appears AI drivers in black cars cheat the worst, give them a VERY wide berth when overtaking - they can and WILL try to hit you no matter how fast you go past.

Hitting them (no matter where) WILL push you behind them. Even if you hit their nose with your rear, so if they shunt you it means you are stuffed.

If you are struggling on later races try re-running the first 3 races (which you should easily win) to farm money for better stuff on your vehicle.

You CAN win the last race (in London) without fully upgrading your car. It unlocks unlimited turbo.

The game is very CPU intensive, don't play it on a machine with an onboard graphics chip. It'll struggle, my old pc did.