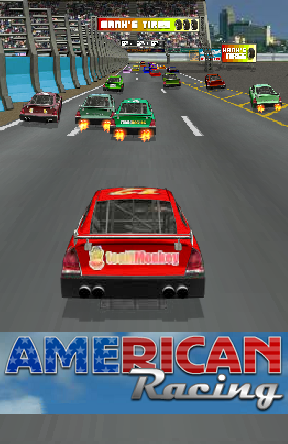 To quote something John Kerry never said, "Who among us does not love NASCAR?" Admittedly, most of us has never been behind the wheel of a souped up stock car, but it's hard to resist the siren call when walking by the obligatory sit-down driving game at your average movie theater arcade alcove. American Racing, by TurboNuke, seeks to capture that steering-wheel coin-operated action, and by and large, it succeeds.

Select an event on your calendar with the mouse, and you'll be transported to the track for a rolling start. Using the [WASD] or [arrow] keys accelerate, brake, and turn left and right as you speed around the track, advancing upon your opponents. Guiding yourself behind an opponent will grant you a burst of speed from Drafting, as well as adding to your Boost meter. Your boost can be activated with [X], [Ctrl], or [Shift]. Most of the events are standard races, though there are also challenges like running over a certain number of robots, or forcing an opponent to spin-out before time runs out. Each event has requirements for clearing or getting a gold medal. Completing events and damaging opponents during a race grants you cash which can be spent on upgrades. New events are unlocked as you clear races, leading up to the overall championship at the end of the season.

As mentioned above, American Racing's inspiration is the clearly sit-down coin-op racing games, which means lots of fast and furious arcade fun, but also limited customization options for your car. It's much closer to Daytona USA than Gran Turismo. There's a nice selection of tracks and various racing challenges to face and the Championship League Table is a cool addition to the formula. Gameplay is surprisingly fluid and lag-free for a 3D in-browser work, though one wishes that an upgrade to your car's Handling was available for the more precision-based challenges. That said, American Racing is sure to get your adrenaline rising as fast as your speedometer will. Boogity Boogity Boogity!

Great Racing Game, love the game-play mechanics on this one!!! Very Smooth and a good challenge too. My only complaint is I got to the last race and got overall first place in the championship series...

but nothing happened... it just went right back to the calendar screen