If you can't get enough Angry Birds but always secretly wished they were pink, Rovio is here to make your dreams come true with Angry Birds Stella, free for iOS and Android. STELLLAAAAAAAAAAA is our pink protagonist, and when a map is stolen from her by an airship filled with pigs and one feathered purple monarch, she sets out to retrieve it the only way she knows how... by violently hurling herself through the air at precarious structures and smashing her face into them until the pigs atop them are destroyed. Fail to knock out all the piggies before you run out of birds, and you'll have to restart the level. Tap and drag on Stella in her slingshot to aim, then release to send her flying. Unlike other birds, however, Stella's got a trick up her sleeve, which is really surprising since she has no arms. If you tap and hold on the screen, you'll temporarily slow down time and can direct Stella to rocket once in a different direction, allowing you to pick off pigs in hard to reach places, or set up a chain of ricochets to take multiple targets out. Along the way, you'll unlock other birds with their own abilities, such as Poppy who can drill down through structures, or pint-sized Luca with her sonic scream. With gorgeous visuals, eye-popping colour, and crafty levels, Angry Birds Stella is both a stunner and challenging... so it's a shame about those obnoxious ads. 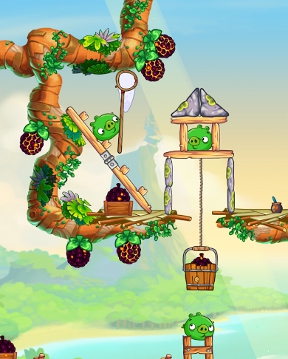 When Angry Birds Stella was first announced, Rovio made a big point about stressing how it would deal with "strong, passionate characters who really stand for something" and tackle "tough issues"... which doesn't really sound much like the totally adorable little physics puzzle game I just played unless you're really stretching, but it's still nice to see a cast of female characters whose super powers revolve around mass destruction, I suppose. Angry Birds Stella starts out simple and gradually grows more complex by tossing in more elements like explosives and trampolines in addition to different building materials. Luca's scream will only shatter glass, for instance, and can be stopped by wood or stone. The number of additional birds you have to fling per level is determined by whether you have a certain number of stars, so getting that perfect rating for each stage is actually important. Eventually the game introduces power-ups like the hammer, which can be activated to destroy a single lingering piggy (or detonate an explosive). You can either pay coins to use the hammer right away, or charge it by knocking piggies out... and interestingly, as of this writing, if you reload a level, it won't reset anything you earned towards activating the hammer. You can just keep knocking out a few pigs and then reset the stage over and over until your hammer is fully charged, though that's likely the sort of thing to be patched out in the future. 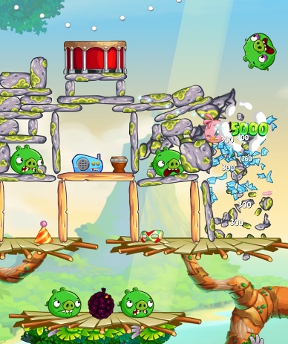 While you can reload levels over and over without penalty, occasionally the game will throw up a timer after a batch of levels, and you either have to wait, or pay coins to proceed immediately. If you were to buy these coins outright, their cost in real world cash is sort of ridiculous given how many of them you need for most tasks. You can choose to watch several videos when the timer happens for 20 coins apiece, but it still feels a little obnoxious. Worse? Like Angry Birds Epic, Stella has optional in-app purchases and then compounds that with between-level ads. This wouldn't be so bad if some of them weren't mandatory video ads that force you to visit their website after watching before you can resume playing. It's the sort of thing that feels like what you'd come up with if you sat a bunch of marketers and Crowley down around a table and brainstormed the most annoying and intrusive ad-supported experience a player could encounter, especially since Stella doesn't offer an option to purchase an ad-free version instead.

It's especially frustrating because Angry Birds Stella is a beautifully made game with clever, challenging levels and a lot of character. The artwork and animation is absolutely fantastic, and while making a whole level of piggies come tumbling with with a shot or two can be very tricky and demanding when it comes to angles, it's also extremely satisfying. If it weren't for its obnoxious ads, optional purchases aside it would be an absolute joy to play for fans of the series, and I sincerely hope the developers rethink and tweak when it comes to the way video ads are incorporated, because I love Morgan Freeman and I shouldn't be thinking nasty thoughts about him because I had to sit through his trailer and then visit his website three. Levels. In. A. Row. Fortunately, the game is actively soliciting feedback, and the gameplay itself is solid and fun, if not exactly something that breaks the mold the series has created. Beneath its obnoxious ads, Angry Birds Stella is still a beautifully made game that's worth checking out.