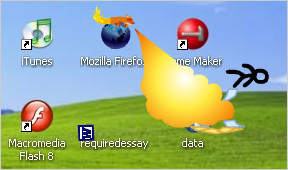 The following is a reader-submitted review by Hilary:

While Jayisgames is primarily about casual gameplay, many visitors to the site are Flash developers or, like me, just casual gamers who enjoy a good work of Flash now and again.

The stick figure is back, and this time... it's personal.

If you enjoyed this, you might be glad to hear there is now a game made from this amazing idea: Animator vs. Animation Game

And I thought the first one was good. This was great. I especially love the ending.

wow. im 17 and i would never have thought someone my age can do such a fantastic animation. props to the guy.

These videos are so awesome

Wow that was amazing, better than the 1st one. and so funny too!

Wow... this was just amazing. It was fast, it was slick, this was really well done. I'm impressed. Congratulations!

I liked the first, and I like this one. I hope we get to see more from this talented Flash artist.

ZOMG I TOTALLY WANT A POP-UP BLOCKER LIKE THAT!!!11!

There was something similar a few years ago (what am I saying a few...more like 7 years ago), and it just had a Windows XP desktop with familiar icons on it (like IE, Norton, etc.) duking it out. It was full screen, and if timed correctly you could really get a few laughs from your unsuspecting friends.

Awesome. This guy really has some talent.

The fight between The Chosen One and AIM is probably the best scene yet.

Corona: Yeah, I remember that. Icon Wars or something like that...

It is "Icon wars" that you are talking about. This is just as good, maybe better.

Wow, I saw the first one, but I didn't know that the creator was 17. This is just so neat. I tried to make a flash animation but ended up having a bouncing ball.

Wow! I've never posted on JIG before, but after seeing this I couldn't resist. It's so impressive! Really well done(and so funny).

It's fantastic, and the fact that a 17 year old made it shows that you can accomplish anything (Online, anyways) with determination and talent.

I really do love these two animations, I think I've sent the jig link of the reviews to at least 30 people.

Far too amusing for words, and very well done.

Thanks for the heads up on the second installment, Jay! Think we'll see a third in the series? Or should I stop holding my breath? ;)

That's even better than the first one :) The part with chat window is awesome ;)

wow! never played anything like it! i haven't played the first one so this is quite amazing! and a 17-year-old made this???? DOUBLE WOW!

Mabye the creator could make a game out of this and add the option of being the animation and the animator. If the creator made something even interactive, that would be great as well. P. S. I'm new here.

Thanks Jay! I was eagerly waiting for the sequel ever since I watched the first one.

This new one is just as nice, though there is one thing that keeps me wondering: why they left scene selection out this time? The ability to pick your favorite scenes in the first "Animator vs. Animation" made it much more fun to watch again.

Also, I think it's only a matter of time until commercial-free copies of this movie will emerge - hopefully without the drama of the first one. Is the author the same guy who claimed the first one being "stolen", and then later confessed that he accepted money from the "thieves"? :/

this name is my secret identity my real name is

WOW. That was crazy awesome! I liked the first one. LOVED this one! I'm definately adding it to my site!

what program did you use

that was sweet. o man i love that. you guys should make a game like that or is there one already???

jay, please ask the maker of this to make the third one this way

draw him then he has a battle with drawings maid off-screen then loaded then he types in 'www.clubpeinguin.com' in the website box then he gets into it so he has a battle around club peinguin but after the stick person blocks the music from the music club useing the manhole he picked up the mouse goes to linerider 2(on this website)and throws line rider of his sled into the shark whuch then goes under water so the mouse press play but then you see the stick person has a plug that means... he pulled all of the buttons exsept the crayon (all 3) and the eraser so he moves by himself and the mouse makes creatures to battle him but the dragon burns him and he dies ansd after it

same as 1 theres the secene things

They should make a game of this

lol that is so cool! haha it was funny! he should make more videos or make it a game where you can actually do that!!

The creator made a third version, but this time it is the interactive game where you can play as either the animator or the animation. I think it's rather well done.

Just a side note to those complaining about lack of scene selection on this one--move your pointer (being careful not to get it confused with the one in the animation! ;-) ) down to the bottom of the video, and it'll put up a media-player-style scroller that will let you move back and forth in the animation.

although this one was longer and more elaborate, i felt that the fact that the stick man had "superpowers" (like spitting out fire and having laser beams for eyes) kind of ruined it, (in my personal opinion) because I thought that the idea was for the stick man to start from nothing to ruining the animator's computer. Still, a great idea and (in terms of length), better than the first one.

wow it is good how do you make it man

please make a animator vs animation 2 the game

i have a great idea for the next one!

LOL I want that pop-up blocker!

Animator vs Animation 3 is out, and was released in August.

There is also an animator vs animation 3, check it out at the makers page on deviantart or just google it. Its even better than 1 and 2.
Truly Epic!