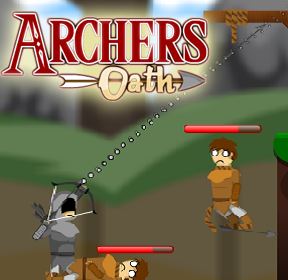 Letting you know now: Don't expect any The Good, the Bad, and the Ugly references. In fact, I won't even make any Robin Hood references! Though that may be difficult when trying to describe Archer's Oath, a neat physics shooter by Iconic Studios where you're a shadow-faced vigilante using archery to save people from hanging. Through 25 compelling levels and four different types of arrow it's your duty, nay privilege, to bring justice to the land! To shoot, choose your arrow then click on the area you want to shoot toward and let go. To curve your shot click on the line and move your mouse down the dots toward the archer. Don't take too long aiming, since people will only hang so long before they kick the proverbial bucket. Of the four arrows at your ready are the explosive arrow, which blows things up; the padded arrow, which pushes obstacles and levers; the ricochet arrow, which bounces off surfaces (including people); and a normal arrow that can stick into a surface then catch and hold falling objects. Trust me, you'll need all these arrows to puzzle out the obstacles that start springing up in your path.

At times the mechanism to curve your shot can feel arduous, and sometimes it's difficult to predict exactly how your ricochet arrow will fly. These minor squabbles get sidelined by some morbidly funny facial expressions as well as levels that require more than just a casual glance to solve, and a safe way of placating your desire to be an archer. While you may not jump on a shield and slide down a rain splattered staircase while shooting with the most perfect of aim, you will get the pleasure of slicing a rope in twain with an extraordinary shot. And saving an innocent person, can't forget that. Now all we need is H. John Benjamin and this game is perfect.