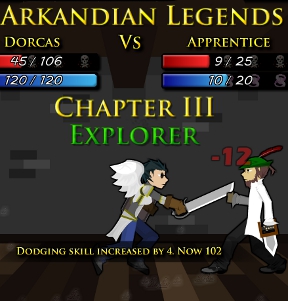 Merlin, Gandalf, Dumbledore, Starswirl the Bearded... it's kind of hard to name a wizard that wasn't capable of a whole lot of coolness, so it should follow that the secrets in any wizard's legacy should be pretty nifty too, right? In Undefined's latest chapter in the Arkandian Legends RPG series, Arkandian Legends Chapter 3: Explorer, the archmage Travicus built a series of forever changing magic dungeons on the Border Isles that were protected from everyone by a magic shield until his death. Now, with the shield down, venturing within the unknown depths of those dungeons sounds like a pretty good idea to a whole lot of adventurers... yourself included. With the promises of uncovering four fragments of a magic macguffinIMEAN magic key that will let you into the late, great mage's fortress, this sounds like a primo opportunity for some turn-based dungeon crawling... and sweet, sweet loot! Also, heroism, probably. But mostly loot.

You'll create your character, choosing from sex and appearance in addition to a multitude of different races that have various positives and negatives, and then set out and commence to plundering. Click on a dungeon to enter, and then use the [arrow] keys to navigate. Just walk into items and treasure to pick them up, and enemies to initiate battle. When you begin, you'll be somewhat of a weakling, so you can expect early dungeon expeditions to involve a lot of ineffectual flailing while yelling "not the face, not the face," but hey, that's how we learn. Your skills will slowly climb as you do battle, increasing in everything from basic melee to dodging, magic, and more, so don't worry if it seems like you're missing more than you're hitting in the beginning... you can always select "auto attack" if you can't be bothered to choose every round's attack yourself. 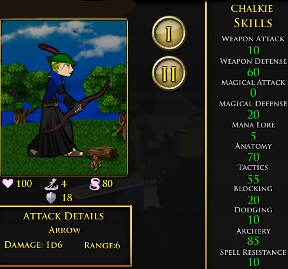 As you adventure, you'll probably wind up with more treasure than you really need, but you can use that to outfit your squad, who will help you during tactical battles, which play out as turn-based strategy board-games... sort of. Only your squad mates will fight during these, as you maneuver them around the map against enemies, but they'll gain in strength and skills just like your hero does. Who is presumably off drinking mimosas, or maybe standing on the sidelines making dramatic Dragon Ball Z-style battle commentary. Additionally, you can also spend extra gold on designing and outfitting your hero's home, because everyone knows you can save the kingdom all you like but you haven't really become the stuff of legends until you've got an indoor swimming pool and an ice cream parlor/bowling alley.

Play all the Arkandian Legends games:

Undefined has, at this point, basically perfected that formula for the perfect addictive casual RPG. Though heavy on grinding, there's something about the endless quests, treasure, and robust skills and crafting system that makes it the sort of thing that can take huge bites out of your free time. Compared to the first few titles, Explorer feels like it's really been worked to make it streamlined, with auto-attack being a welcome addition to battles in particular. The house design aspect is a nice touch, though it fails to really feel more like busywork, and the tactical battles that make their return still feel a little slow and dull in the beginning. It also feels like the game has taken a step back with its story in that there really isn't much of one, though I guess you can pretend you're actually running around Halaster's Undermountain. Despite these complaints, however, Explorer is still an extremely impressive feat packed with hours of gameplay and tons of additions, like the new races, that make it a lot of fun to spend an afternoon or two with. After all, where else can you play a magical angel who charges into battle wearing pajamas, blue-jeans, and sunglasses?

Is there something I'm missing in re: the crafting/alchemy system? How can I learn recipes? Or am I supposed to randomly combine 24 items in 16 slots until I get lucky?

Hi infanttyrone. :) You can earn recipes by adventuring in certain dungeons. Most of them will be clearly marked in their descriptions when you mouse over them as to what, if any, recipes you can find inside.

Does the achievement system in this game/last games really give you loot in the next game/this game?

The achievements in the Chapter 1 did carry over to Chapter 2, so I imagine the same is true for this one (which I haven't tried yet).

I played this game all weekend because I wanted to unlock the other races and at least take a gander at them, but I hit a wall in progression possibly because I chose to specialise in archery. I got to a point where I couldn't progress more than one or two fights into the two ever-changing dungeons that were available, and I couldn't get past the first fight in the one unchanging dungeon that was available. I threw myself at them until I very quickly ran out of money and was left with no option but to do the painfully dull and annoying tactical battles to get money - but these did nothing to help power up my own character, of course.

I was approaching 900 points in Archery (and approaching 1000 in Anatomy, whatever that means - there doesn't seem to be an explanation of skills in-game) and I had a terrible chance to hit most enemies - and I believe the skills max out at 1000. And the skill was only increasing by 1 point on the all-too-rare occasions that it would go up. I began to believe that I should've focused on Magic instead, but it was far too late to seriously consider doing that without starting over given that there were no lower level repeatable dungeons.

There are 2 modes, dungeoneering and squad combat. Its rather hard to get anywhere dungeoneering due to lack of gold, tiny backpack, no healing, expensive dungeon entry fees. (unless you can start as demon!)

Therefore I recommend stripping your dude and doing Squad combat instead, focusing on hiring all 6 slots and giving as good as a weapon as you can. Squad combat is FREE, no risk, and will give you a good amount of gold and items.

After 10 fights or so, you can afford a nice backpack, strip squad and equip your dude, then do way better. Get to the HEALING spell ASAP so your mana bar is useful as this basically doubles your longevity in dungeons.
----------
Prioritize LEARNING gear as skills >> any other low level gear bonuses. Keep a set of learning gear for later btw, esp the PRACTICE SWORD!
I recommend using MAGE weapon as it boosts your Mana Lore and Magical Attack which helps your SPELLS (even Heal!), but get bow/sword up to 500ish too since its easy to do so and you might find a particularly good specimin and switching over lategame from 0 is hard!

Equip red-chest items that give HIT CHANCE and DODGE which are the most important stats. Even with high skills you can miss tougher foes endgame.
--------
Once stuck in Dungeoneering, equip LEARNING gear, do Crafting, Experiment, hold shift, place 1 cheap reagent in grid, Combine. Repeat. Buy common reagent packs. Get ARTISTRY up to 1000 (and lots of scavenge too).
Then do BLACKSMITH repeatable and get some good wpn recipes. Crank out lots of crap to boost skill and then make Uber weapon for yourself and decent wpns for squad.
-----
Note: Equipping Learning gear when mass disenchanting is very helpful too obviously since its expensive to boost it due to paying for disenchant item and loss of sale of item. Keep 1 big disenchanter to remove excess items during longer dungeon runs that you'd lose anyways.
-------------
Stuck in squad combat? Do the Rescue Dungeon until you are fighting DEMONS. Each rescue is an awesome 500 skill vampire. Ideally get 6 of these dudes, but even 1 as your Main Tank with Whirlwind is hugely beneficial.

Age of Origins - Why Everyone Is Talking About It

3,587 Views
1 Comment
jayisgames.com— Age of Origins is a massive, super engaging mixture of strategy, tower defense and the drooling undead. It's creating massive buzz around the mobile gaming world, and with good reason. With more than 40 million downloads worldwide, the game...  ...

3,870 Views
3 Comments
chrpa— Jayisgames needs your help to continue providing quality content. Click for details After more than a year we've got a new game by Yonashi and it's a good one! You stand in front of a wall with eight lockers...  ...

2,390 Views
2 Comments
chrpa— Jayisgames needs your help to continue providing quality content. Click for details Welcome to Weekday Puzzle! In unique platformer by mmatt_ugh is only one key needed and you can still jump a lot. Then comes an interactive fiction by...  ...