Once upon a time, in a land far, far away, there lived a princess named Sophia who was having a horrible, very bad, not good day. Poor Princess Sophia woke up in an abandoned castle to discover that (a) she'd overslept by about 100 years, (b) all the humans including her family had booked for places unknown, and (c) there was no local wi-fi. Being the intrepid Princess that she is, Sophia immediately set out to find the rest of humanity along with a decent half-caf mocha latte. Yes, our favorite non-magical princess is back in Awakening: The Skyward Castle, the fourth and final installment of Boomzap's popular adventure hybrid Awakening series. 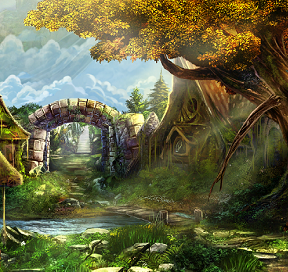 When we last saw our heroine she was flying towards the floating city where humanity now lived on the back of a flying unicorn (just go with it). Now she has crash-landed, injuring the poor unicorn while doing so, and must find help for her fantastical friend from the locals. Unfortunately, they all seem to have disappeared or been turned into stone, so once again she must travel the length and breadth of the land in search of what went wrong and to fix it using only the power of her wits and her traveling companions: a pyromaniac pocket dragon and an irritating owl named Randolph. At this point you have to wonder what is up with all of the magical inhabitants of this place that they are in constant need of rescue from someone who doesn't even have magic, merely the power of her own logic.

As with most hybrids, Awakening: The Skyward Castle contains a mix of hidden object scenes, mini-games, and puzzles to solve along the way to smashing most of the Sleeping Beauty cliches. Hidden object scenes themselves require a lot of interactivity to complete, and the mini-games and puzzles are a nice mix of both familiar and original designs. What sets the Awakening games apart, however, are the inclusion of one particular type of puzzle that will be played over and over again throughout the game. The first three games featured mahjong (Awakening: The Dreamless Castle), card games (Awakening: Moonfell Wood), and tangrams (Awakening: The Goblin Kingdom). This time around you'll be faced with a series of nonograms, aka picross games. As with the earlier games in the series once regular gameplay has been completed there is a feature allowing you to play nonograms as stand-alone puzzles from the main menu. 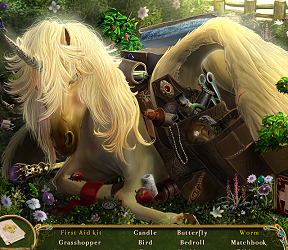 Awakening: The Skyward Castle contains all of the usual controls associated with a well-designed adventure, including a changing cursor, a bottom-loading inventory, a handy notebook to keep track of the story and clues, and a refilling hint feature that also works as a skip feature for the mini-games. The notebook is divided into two sections, one which keeps track of the actual storyline and clues, and another which holds a running tally of goals to help the player keep on track. A nice separate feature is a map of the amazing floating island which can be used for one-click navigation back to places you've already been which helps minimize one of the great complaints of today's point-and-click adventures, namely the constant wandering back and forth. Gameplay hints come in several different flavors, from a plethora of sparkling lights to highlight areas of interest to advice as well as the aforementioned refilling timer and a quick and easy tutorial at the beginning of the game.

Analysis: Much has been said in reviews of the previous games of the series about the gorgeous scenery, the lovely music, the whimsical characters, etc. but two things really make Awakening: The Skyward Castle and the previous games in the series really stand out: the depth of gameplay available and the absorbing storyline. After playing one of Boomzap's intensively puzzle-heavy games other hybrids tend to feel like all story and no substance, with gameplay sacrificed upon the altar of pretty or scary. The four Awakening games pack so much gameplay punch that all other adventure hybrids suffer by comparison. 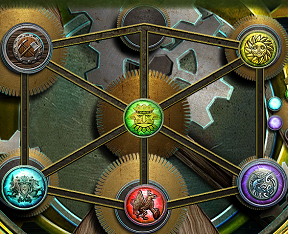 As Princess Sophia travels through a luscious background of hand-painted fancy while interacting with some interesting characters, she also illustrates why the story shines through as much as the gameplay. Sophia is at what would seem like a huge disadvantage, a non-magical character in a magical world, yet she perseveres through all the obstacles in her path using not magic, nor her looks, nor help from a handy prince charming, but through the application of her brain. Princess Sophia's advantage is her smarts, a nice message neatly conveyed against a backdrop of flaming dragons, flying unicorns, and snarking goblins. Stay in school, kids!

Boomzap has paid particular attention to the puzzles and mini-games within Awakening: The Skyward Castle, featuring a nice mix of the familiar and the new. The hidden object scenes are nicely interactive and very engaging, and even the familiar mini-games feature some nice twists to make them feel fresh. Best yet are the three modes of play which cover a wide range of adventure gaming skills. The relaxed mode is chock-full of sparkles, hints, advice, and a quickly refilling hint timer. The Normal mode features far less sparkles, a slower refilling timer, and less narrative advice. The difficult "Dreadmyre" mode features no advice or sparkles and no mini-game or puzzle skipping.

There are a few minor issues to be sure, especially with the tight clickable areas in the hidden object scenes. This is a very minor complaint and doesn't detract at all from the stunning gameplay available within Awakening: The Skyward Castle, which brings a satisfying conclusion to a fantastical series. With its meaty story, hefty length, and vast array of puzzles Awakening: The Skyward Castle is one of the best adventure hybrids this year and a definite must play.

You must find twelve carrots.

Getting into the Greenhouse

Getting the Round Whetstone

Getting Herbs for Alchemy

Getting the Weapons Cabinet Key

Getting the Cockatrice Chick

Getting into the Skyward Castle

Getting into Sophia's Bedroom

Getting the Frost Charm

Getting a Peg Leg

Getting Inside the Captain's Chest

The buttons are numbered 1-5 starting from left and going right.

An "arrow in the knee" joke?

I never took the developers of Awakening to have that kind of sense of humor.

Regarding the tight mini games

the walk-in wardrobe puzzle wont let me pick up the scissors. They are now under the unstuffed bear and I can't do anything! I either click on the bear or leave the scene instead of picking up the scissors

You must find twelve carrots.

Getting into the Greenhouse

Getting the Round Whetstone

Getting Herbs for Alchemy

Getting the Weapons Cabinet Key

Getting the Cockatrice Chick

Getting into the Skyward Castle

Getting into Sophia's Bedroom

Getting the Frost Charm

Getting a Peg Leg

Getting Inside the Captain's Chest

The buttons are numbered 1-5 starting from left and going right.

I've beaten the game, but I missed some of the achievements. The game won't let me play through again; when I click the PLAY button it just brings up a window congratulating me for clearing the epilogue. The only way I can see to replay the adventure is to start a new profile, which clears all my achievements (I've tested it).

Do they expect the player to get every achievement in a single run? To me that seems to be a pretty tall order.