If you've seen one match three game, you've seen 'em all, right? Azkend aims to change that, but not in the way you might think. Instead of shaking up the gameplay or introducing awkward new features, developer MythPeople spent time polishing the game to a brilliant shine. The end result is typical puzzle gameplay with a gorgeous visual design and sound package. It goes to prove that a rich presentation with tried-and-true mechanics can turn an otherwise ordinary game into a real gem. 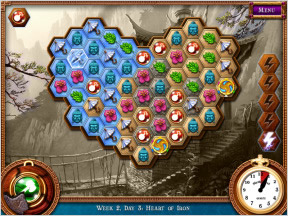 A team of archaeologists discovered a mysterious relic in Far Asia, but it turned out to be more trouble than good. Azkend begins with the team embarking on a return trip to reach the Temple of Time, restore the artifact to its original location, and lift the evil curse. Each leg of the journey is represented by a black and white photograph that is gradually colored in as you complete levels. You also earn pieces of talismans that introduce new tiles, such as bombs and hammers, for the next group of levels.

The mechanics in Azkend are, as one would expect, wonderfully simple. The goal is to complete a match of three or more tiles using every hexagon on the board. Simply click and drag the mouse over tiles to link them and release to send them spinning. A satisfying clinking sound accompanies each match. Later levels introduce a number of different elements that help/hinder your progress, such as bombs, frozen blocks and steel tiles. Just enough spice to keep your interest alive.

Each time you turn an unused hexagon you're awarded a lightning rune. Fill the Thunder Meter with as many as five runes and helpful bolts of electricity zap down from the sky and clear an equal number of tiles. You can even unleash the furies of nature by snaking long chains of tiles across the board. Part of what makes Azkend so enjoyable is its sense of epic drama. This is how the gods of ancient mythology would play a match three game, with fire raining from the sky and lightning bolts crashing at every turn. It all fits into the tale of ancient Oriental mystery and is executed with rich style. 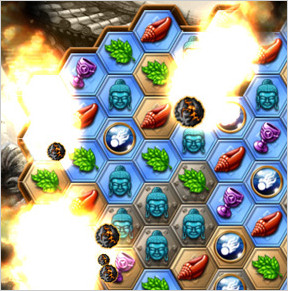 Analysis: I've played several casual games designed by MythPeople, and while they never charm me with original concepts, they do have an undeniable sparkle that makes them fun to play. Azkend is a prime example of this, as its basic mechanics are as common as casual gaming itself, yet when you package it in such a beautiful audio/visual world, suddenly it grabs your attention and won't let go.

Azkend does feel a bit lacking in the gameplay department, however. Other than the unique power-up system, don't expect it to bend the rules of casual puzzle gaming very much. Each level is more of the same matching with slight variations. Just enough to keep it interesting, but not much more. It doesn't ruin the experience, strangely enough, but match three veterans will likely blaze through the game without looking back.

What would have been an average match three clone for the shovelware pile has been made enjoyable by applying a little elbow grease. While I can't help but think how much greater the game could be with a few drops of gameplay innovation, Azkend is still a package worth unwrapping.

Hey, Jay, couldn't you arrange a discount code for your loyal surfers?

Use that discount code when buying Azkend downloaded at http://casualgameplay.com for 15% off during the month of February, 2008.

I love playing Azkend but for the last three weeks I am stuck in the Survival mode at 61%. How do I get to go forward? My fingers just can't keep up! Thanks.

I'm confused, are there different levels? Do I have to have all stars on the trail? And at the last part of the trail, do I need to light up all green to get to the next level?
The game is fun but the rules are very vague.