How many blocks in Babylon? Three score blocks and ten... Well, OK, so maybe that's a bit of hyperbole, but there's no doubt Nekval's stacking game has more different kinds of blocks in it than a three-year-old's bedroom. Much like that hypothetical three-year-old, your goal in this physics puzzle game is to build a blocky tower as high as you possibly can... or at least high enough to cross the green-and-white goal ribbon. And like that three-year-old, with her handful of hand-me-down Lincoln Logs and bin full of Duplo, those blocks don't always play nicely with one another. Cactus blocks have the unfortunate tendency to pop water balloon blocks. See-through glass blocks shatter against anything but sticky green blocks. And do we even need to explain what TNT blocks do if you nudge them too hard? Balancing your tower is only half the battle here. The other half lies in carefully positioning and allocating the different kinds of bricks, making sure that friendly blocks get together while unfriendly blocks stay far, far away. It's quite a refreshing twist, in fact, to see a stacking-based puzzle game that utilizes physics, but doesn't have physics puzzles as the main point! 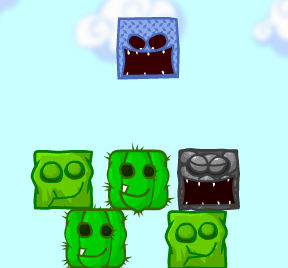 Some of Babylon's levels do require you to perform physics tricks, and a couple will test your balancing skills. For the most part, however, the game focuses on block interaction, and figuring out how to properly place the blocks given to you so that they don't annihilate or repel one another. There's no penalty for dropping pieces, other than a lowered score at the level's end, and you can't "waste" blocks, since the game will keep giving you the same type of block until it's settled properly on the stage. Of course, this means you can't cheat and just dump away pieces you don't want to use! Some levels can be failed, but most stages will generously let you plug away at them until you win. There's even a handy undo button! Less handy is the fact that there's no preview that shows you want kind of block you'll need to place next, leading to unnecessary guesswork. Another unfortunate setback is that the different interactions between the blocks aren't always clear. While it's fairly intuitive that, say, an angry-faced block with one pattern on it won't like a happy-faced block of the same pattern, or that water will turn a burning red lava block into a harmless stone block, other things aren't so obvious. It's hard to tell, for example, that the blue dotted pieces are metal blocks that will stick to U-shaped magnets, or that the stickiness of green blocks means they won't break glass, or that icy blue-white blocks will freeze dynamite. But despite the lack of explanations and some reliance on trial and error, Babylon's central concept is still clever and makes for a good change of pace where physics puzzlers are concerned.

Maybe it's just my limited mentality, but I'm having trouble understanding this game and had to finally quit at level nine because after a certain point, I was unable to place any more blocks at all.

It's not a good sign when you don't understand what's going on in a game like this.

I watched a walk through on YouTube and still couldn't understand why certain things in the game were happening. I eventually gave up trying to play.

Before you hit play
"rules"

-that grey one is steel
-rock breaks glass; glass loves to break
-cactus pops water
-yellow block blows up tnt, scratch that, anything dropped on tnt makes it explode, unless tnt is frozen
-yellow blocks are bouncers, bouncing over the height does not count as victory unless the block lands on a surface; bouncy blocks are less annoying when on their sides
-steel connects by magnets
-water freezes on both sides of an iceblock and cactus freezes as well, everything freezes except fire
-electrical blocks only like themselves? can be eliminated by fireblocks
-fire only burns so far if there is ice it stops; water turns fire into rock
-the green one, he is not a zombie, he is a sticky booger

the more blocks you use the less points you get

seems like sometimes it is malfunctional, level 7 for instance

by the way I can click about ten times faster than it allows me to place the blocks.