Back to the Future: Season 1

Stupid time-traveling. Just the other day my brain had to yet again churn over the concept in Terminator 2: that Skynet and its robot horde would not have existed if it didn't send a robot back to a time before it did exist. That makes my gray matter slap itself repeatedly, probably because time is the "fourth" dimension and we can only really operate in three. Introduce some chaos beyond that and you have a cascade of events, changing everything in the future. One would think that nobody understood this better than Marty McFly, arguably the most time-traveled person in the history of the world. Yet he still manages to go back in time and mess it up. But he fixes it too — what else would you be doing in Back to the Future: The Game? 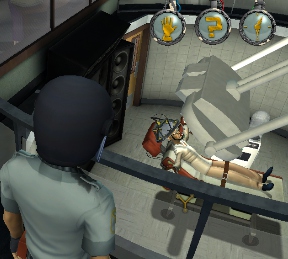 Telltale is the lone island of episodic adventure games — point-and-click sagas that emerge one chapter at a time each month. Back to the Future started in December, which we reviewed, and has since completed its run. It all started with rescuing Doc Brown, the mad scientist who built a time-travelling sports car which enables all this timeline wrangling. Caught in a 1930s jail, he has to be sprung by Marty. But something is inevitably changed and when they return to 1985 (the present year of the movies), things are right. As always it will fall upon Marty to save the day, but in this epic things get very convoluted with mobsters, totalitarian societies and even Doc fighting against Marty to stop the progress of science — Great Scott!

Analysis: The difficulty of Telltale's adventure games vary, but Back to the Future would comfortably sit in the easier bracket. While the season dishes up some crafty puzzles, it is not out to make you suffer for the story. In fact, at times the game seems a bit too keen on talking to characters and appears lax to roll out the puzzles. After a big splash with the first episode, which was terrific, the season stumbled a bit with the second chapter. Then it became a bit too story-focused with chapter three, but here things also pick up pace. Using that momentum, the fourth and fifth chapters bring it all together very nicely — some sharp challenges and a few fun twists ultimately delivers a really entertaining story. 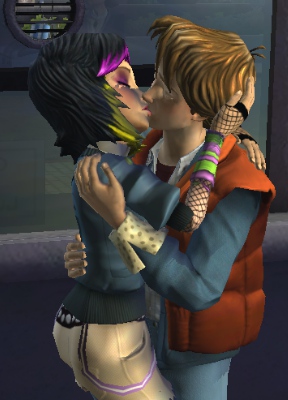 It is harder to say if this series will appeal to someone who has never seen the original movie series. It doesn't rely on knowledge of the movie trilogy and fan references mostly fall away by the second episode, making this very much its own story. But because Back to the Future always takes place in the same town, just in different eras or time lines, Marty revisits some places (like the town square) a lot — as in every single of the five episodes. Each episode also has its own new areas, but the core of it all maintains a bit of a familiar feel. If you aren't invested in the fates of Marty and the Doc, this might start feeling a bit tedious. And much of that interest, at least for me, came from my enjoyment of the original trilogy. While the game does a sterling job staying away from relying on arcane canon knowledge from the series, it is still a part of Back to the Future.

Putting the story and characters aside for a moment, this season has a fair amount of fun adventure gameplay in it. A hint system makes it easy to get ahead, but puzzles are rarely that infuriating. There are moments of frustration, especially when you have to keep repeating a sequence to figure out what you are doing wrong. But this is not the toughest series Telltale has made. A large amount of time is also spent on story — if you prefer your adventure games to be solitary endeavors with little exposition, Back to the Future might disappoint. Likewise, if you are holding out for a large variety of locations, as with Telltale's Sam & Max or Monkey Island games, this will fall short.

But within the confines of the Back to the Future universe, the game works very well. Getting Christopher Lloyd (and, for the final episode, Michael J. Fox) for the main voices is great and the writing is respectful of the series without lathering it with fan drool. Like any 'season' there are a few missteps and stumbles. I wasn't a fan of the clumsy inventory system and at times there just seemed to be too much pointless dialog. But it all plays out well, creating an epic adventure that is worthy to be counted alongside the original three movies. It certainly gives high hopes for when Telltale releases the first episode of Jurassic Park.

Windows:
Get Episode 1 free (registration required) Get the full version

My eyes! Is this really rated green? Because there are moments where I hear Marty swear.

Yeah, there does seem to be some language, especially in the first episode, although nothing worse than the original trilogy of movies...
I did see Sony had this on sale this week, so I've gone through it there. There were extremely minor hiccups, nowhere near as choppy as some of the Wii ports Telltale's done. So far, Episode 5 has yet to be released on the PSN, but hopefully next week or so... Pretty happy with the series overall.

Incidentally, the review right now leads referring to "Arty" McFly, which is the main character's grandfather. This is fixed to Marty in subsequent references. Just thought I'd point that out.

I'm not especially familiar with the movies, but I still enjoyed the whole series.

I wonder if there'll be a Season 2.

I love the work Tell-tale is doing with every franchise dear to me, and I played all their games (except for Strong-Bad, for some reason..), so high grades I have for BTTF-TG are nothing odd.
Wow! I'd like to applaud Mr. Francis, he described quality fluctuations from episode to episode exactly the same way I would - I couldn't believe how thoroughly good the first episode was. Then, typical for many Tell-tale series, second one was the conclusion of story from the first and had somewhat lesser quality. The last three start another mini story-arch and get better and better till the end..
For anybody who didn't watch the movies, but wants to play these games, I urge to go watch the iconic trilogy first, one of the best things 80-es had to offer. If not, you... lose something in translation. Watching the original, one could in its entirety appreciate subtle touches of fandom and love-letter Tell-tale has sprinkled through the game, especially E1.

I've played all the episodes and i loved it the game i simply put awesome it's kindof a different story than the movies but you find out a lot about marty's ancestors and doc's family as well,
and if you were a fan of the movies you will most likely like the game

I liked the movies, though it's been kind of a while since I watched them... And I absolutely loved these games. I liked that the puzzles were not impossible (though they gradually got a bit harder; the hint system is useful when you're absolutely stumped). Great voice cast, too.

WAIT THEY'RE DOING JURASSIC PARK AS WELL THIS IS AWESOME.

I don't know. I fall into the "mildly disappointed" camp when it comes to this series.

Perhaps it has to do with me being a big fan of the original movie as well as good old point-and-click adventures.. and the Telltale for me slightly fails in both accounts. When it comes to the story, it seems to me Telltale tries just a bit too hard to stay true to the movies' spirit and cram in as many references as it can in a short time period. I'm not saying I wanted the game to reach the ludicrousness of the BTTF cartoon, for example, but still I must say I have found the story to be tame, uninteresting, uneventful and..yes, boring. Marty and Doc have a frikkin time machine, and the game still manages to be as claustrophobic as humanly possible.

When it comes to point-and-click adventure aspect.. good God. It's not simple, it's insulting. You have an in-game hint system, you have internet for pete's sake, there's simply no reason to make all the puzzles (if I can even call them that) not just easy, but also accompanied with solutions telegraphed in every conceivable way. Telltale doesn't just hold your hand in these games, they sit you down, explain what you need to do in big capital letters.. and then do it for you, just in case.

All in all, these games are still charming, they are respectful to the original material and are definitely worth getting for the price. But if you want to have a truly enjoyable time-traveling experience with some ingenious puzzles, I wholeheartedly suggest Sam and Max Season 2, especially the brilliant "Chariots of Gods" episode. That episode is far, far above everything BTTF series has to offer.

Just played the first episode, and I gotta say, I loved it. The characters are spot on true to the series, the locations are all excellent, and yeah, it was a little easy and linear, but come on... how challenging do you want it to be? It's hard to keep a good story going while throwing in puzzles. In my experience, the harder the puzzles, the more it essentially halts the storyline until you get past it. It may be easy, but it's definitely a lot of fun.

And I have to disagree with James' older review about George McFly's voice: I thought it was pretty good, considering it was his character at the end of the 1st movie, and I thought Artie's voice was really good at emulating young George's voice. He dragged his words alot, just like Glover used to do. I understand other people's hesitations, but again, not all games should be judged the same, and I loved the way these were put together. Can't wait to play the rest!