Mmm, delicious eggs. As we've learned from the Angry Birds series, round, legless piggies love nothing more than a good egg. And they'll do anything they can to get their snouts on one! In Rovio's latest physics game Bad Piggies, the tables are turned and you're working to help the pigs get what they want. Instead of slingshots and breakable forts, though, you're building rickety contraptions box by wooden box. It's a little bit of construction, a little bit of action, and a whole lot of crashing. Exactly what you need in a casual mobile game! 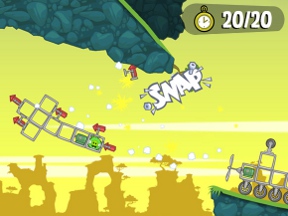 The pigs have a plan, but unfortunately that plan was outlined on a map that has been torn to shreds. Collecting each piece going to take some work, but since you're here to help, the piggies won't have too rough of a time. As long as you consider being thrown down a hill into a crate of TNT "not too rough". Each level starts out with a grid and a number of items in your inventory below, things like crates, wheels, propulsion accessories, helium balloons, and so on. Drag objects into the grid and place the pig inside, constructing a roughshod contraption that, with any luck, will survive the terrain ahead and deliver the piggie to the mappie.

Fortunately it's not just up to gravity and luck once you set your contraption in motion. Using various forms of propulsion (shaken soda bottles are our favorite), you can actually exert some control over the movement of the piggie, knocking it back and forth using the controls that appear during action. Where you place these propulsion accessories really matters, and you can performs some really crazy stunts by changing up the construction. Later in the game, this portion of play takes on a much bigger role, so you'll probably have to resist the urge to build a piggie Death Star in favor of a sensible machine that will actually accomplish your goal.

Analysis: Bad Piggies is very different from the Angry Birds series, the only real connection being the artwork and the characters. The game itself is a fair combination of Rovio's previous effort Amazing Alex with some arcade physics thrown in and casual-ified. The puzzle elements of Bad Piggies are quite strong, and even though later levels focus on timing and reflexes, you still have to be able to build a stable contraption before you can pilot it. And even if you fail, the results are usually pretty funny. 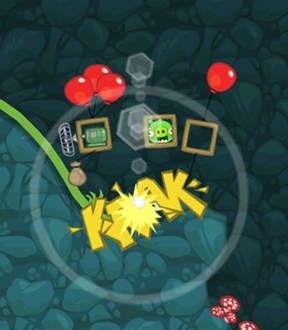 Scoring adds a lot of replay value to Bad Piggies, and instead of being numbers based, it's directly related to the actions you take and the stars you earn. Each level has three goals you can aim for, ranging from simple things like grabbing the map within a certain time to the more complex like not using an apparently vital piece of equipment in your contraption. This intensifies both the action and puzzle elements of the game, and since it's completely optional whether you shoot for perfection or not, Bad Piggies is only as challenging as you want it to be!

Currently, Rovio has included 90 levels in the initial release, with the promise of more listed right there on the level select screen. The difficulty is a very gradual curve, starting with handfuls of almost too-easy stages and ending with massively challenging puzzles that require brains as well as pitch-perfect reflexes, especially if you shoot for the three star goal. If there's any shortcoming to Bad Piggies, it's that the first dozen or two levels are too easy and end up feeling a little repetitive. Stick with it, though, and the meat of the game proves its worth.

Rovio has managed to create something familiar but still unique and engaging. It's massive amounts of fun, too, and you can get into some crazy scrapes with the machines you build out of wooden wheels and makeshift bellows. Plenty of challenge, plenty of personality, and plenty of eggs for all to enjoy!

Congratulations, you have completed the Ground Hog Day episode of Bad Piggies. Be sure to go back and capture all the skulls if you have not already done so.

I opened up Angry Birds yesterday on a whim, and there was an ad for this game so I figured what the hey, I love Angry Birds I'll love this game too.

I couldn't have been more wrong, this game is nothing like Angry Birds except for the graphics and characters. I feel like I put a dollar into a paper shredder, sigh.

It's only bad if you WANT it to be like Angry Birds. Novia can't just repeat the same game over and over again! I found this actually better than Angry Birds, probably because I just like building things. It's also really challenging!

Congratulations, you have completed the Ground Hog Day episode of Bad Piggies. Be sure to go back and capture all the skulls if you have not already done so.

The HD version is free too. I wish I saw that earlier.