When you're doing a remastering, of sorts, of 1998's iconic Dungeons and Dragons RPG Baldur's Gate, you have to be careful because people simultaneously crave and fear the very idea. Either you do too much and people burn you at the stake for

morphing it into something else entirely, or you do too little and you still get burned at the stake for getting players to pay for something they feel they already own. (Well, I mean, we get so few chances for a good ol' fashioned developer burnin'...) Overhaul's Baldur's Gate: Enhanced Edition (also available for iPad) was, then a risky decision... but for fans of the old and new players alike one that ultimately pays off. Rather than delivering a Tyra Banks style makeover on the game, Overhaul has instead focused on lovingly restoring it the way you might an old car, creating something that both looks great on a showroom floor and is a lot of fun to zip around in. 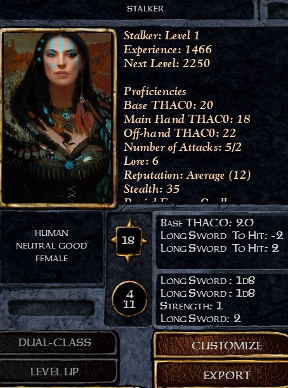 The story and core gameplay remain essentially unchanged from the original. As the ward of a wise sage named Gorion, your sheltered life in Candlekeep is destroyed when you abruptly find yourself unable to return to the life you once knew and hunted at every turn by people who seem to know much more about you than even you yourself do. The game plays like a Dungeons and Dragons game, so you'll create your main character, choosing everything from race, gender, class, and alignment in addition to distributing skill points, and level up as you defeat monsters and solve quests. Combat is real time, though you can either pause the game manually to issue orders whenever you like or set the options to force the game to pause for you between actions, and success comes down to careful management of your party, their equipment, and your tactics. As you travel, you'll come across many potential party members, many with vastly different agendas and personalities, and make a name for yourself (either as a hero or a villain) as you struggle to get closer to the truth about yourself. 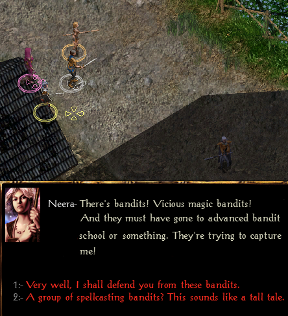 A lot of the tweaks and enhancements aren't immediately visible, apart from the obvious bits like the inclusion of all the subraces and classes and such from Baldur's Gate 2 at character creation. One relatively minor change, for instance, are the coloured circles that correspond to party members so you can tell at a glance where everyone is headed and how they'll stand in formation when they get there. The whole game looks altogether cleaner and sharper and runs (for me at least) buttery smooth without the need for any of the player-created fix mods that were previously so popular. While the new player soundsets and portraits are great, the biggest additions are the three joinable NPCs, all of whom you can pick up fairly early on. The writing and voice acting are largely top notch, and while it's hard to say whether they'll ever be as well loved as the original cast (characters like Jaheira are a tough act to follow), they do actually fit in quite well and grab your interest even if Neera sort of feels like she's directly trying to compete with Imoen.

The only real downside is that the three new NPCs are chatty and dynamic in a way that the original Baldur's Gate NPCs simply... aren't. Coupled with the romances they offer, it's a degree of talkativeness that keeps in line with the way party members are handled in Baldur's Gate 2, but winds up sort of overshadowing the others here. It's also a little disappointing that the biggest addition, the six hour adventure called "The Black Pits" is standalone only with a new party you create yourself, and as such feels like a bit of a missed opportunity to be the sort of challenge you would have relished tackling with your main story party like, say, Watcher's Keep from Baldur's Gate 2. After all, considering how much fun it is for being largely combat-driven, doesn't it sort of seem like you need Xan's resigned confidence in your eventual doom along for moral support? It is, overall, an impressive labour of love that shows the utmost respect not only for the well-loved source material, but for the talented community that has kept the game alive through popular mods. (You can check out which ones are currently compatible here, though many like the popular BG 1 NPC Project at Gibberlings 3 are already being worked on to ensure they can be installed as soon as possible.)

The end result is a subtly refined experience that feels clean and fresh without drastically changing anything that would upset purists, unless you were really married to the old cinematics. You can still find everything from your Golden Pantaloons to the small, unmarked stuff like the ridiculously tiny hidden diamond in the first area after Candlekeep. If you were expecting (hoping) for a drastically different jaunt into the realms, maybe one where all the major boss battles were 80s style musical dance-offs or Imoen has been replaced with something less annoying, like a perpetually yappy and shivering chihuahua, Baldur's Gate: Enhanced Edition might not offer quite enough in the way of change for you. If what you're looking for is a bit of extra spice and shine to something you already love, or curious about picking up the game for the very first time, then Baldur's Gate: Enhanced Edition is an easy recommendation, and something that will keep you busy for a long, long time.

Awww, and I was hoping this game was free to download. I dislike how this site have "Get the full version" when it should have "Buy the full verison" as otherwise you can't tell if the game is free or not. Many great games allow you to simply download the full version while allowing bonuses to those who pay like Legends of Yore.

Sorry Redapaneda, that's why the game doesn't have the free tag on it. :) Also, when a download game is free to download, we specifically mention it in the link text (i.e., "Get the free full version").

Well like I said, some games are not completely free but at the same time don't really count as a demo. https://jayisgames.com/archives/2011/05/legends_of_yore.php being a good example as stated above. What do you guys do in a case like that?

In such an instance, a game would get a "microtransactions" tag. The reason Legends of Yore doesn't have one is because it was originally free when I wrote that review, so I'll have to go back and add it in now.

K, thanks for explaining it and I will keep a better look out for the tags for now on. Sorry for kinda spamming this review with newbie questions. You guys really should create a Q&A or about page for this site. Took me forever to learn there was even a rating system for this. I thought for the longest time they were just randomize smiley faces.

Not really much of a Q&A for the site itself. =P More like troubleshooting flash games. Regardless there really should be a "Help" tab on top of the page for stuff like that.

The "Help Squad" tab resolves into a drop down menu for ratings, the support page (which also doubles as a forum to ask questions) and more.

Most things on the site are clickable, including the ratings icons. Click on one to be taken directly to the page that describes what they are.

Hi Redapaneda, Welcome to the site. :)

The Support page IS our Q/A page for the site. Feel free to post any questions there that don't seem to fit anywhere else. It's found in the "Help Squad" menu at the top of every page of our site.