Isn't it wonderful to be a prince... To travel the vast expanses of your land on your mighty steed, while the gentle breeze plays with your golden locks, and your armour shines in the sunlight. To rebuild towns and aid grateful villagers, who will sing songs in your honour in the decades to come. To fight ancient evil with a steady hand, your sword glistening as it bears down upon the forces of darkness. Although, to be quite accurate, this wasn't exactly your idea, more of a desperate mission to save your fiancée. And it's not really your land as much as her father's. And your golden locks sort of make you look like a girl. In Alawar's new time-management game, Ballad of Solar, you are the royal protagonist in search of his beloved, and you have your work cut out for you. 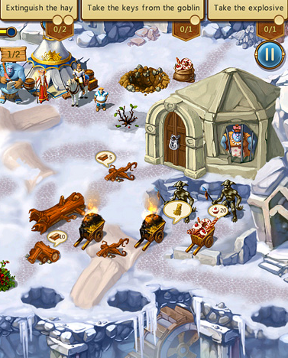 A nefarious wizard named Grogan has invaded the neighbouring kindgom and taken princess Lumina hostage. Her father, overwhelmed with grief, has shut himself into a cave, so it is up to Solar to save the day. He roams the land trying to find and defeat the wizard, and, noble as he is, takes it upon himself to help any unfortunate souls on his way. There are villages to be renovated, townsfolk to be saved and sheep to be found. Luckily, the prince doesn't have to do all this by himself; he travels with his faithful servants and, in the course of the game, he is joined by a host of amiable creatures willing to lend a hand.

The kingdom consists of seven regions, divided into levels. Each level has two or three stages, some of which are timed. Your goal for the day comes either from character dialogues before a stage begins, or from interacting with various creatures on the map. At the start of each stage, the prince arrives and sets up his tent containing a number of workers. Their job is to collect wood, stone and gold, remove obstacles and perform other minor tasks. Unfortunately, they refuse to work on an empty stomach, so most tasks require food. The other resources are used for building bridges, repairing houses or upgrading buildings. In some levels, you can only get materials by collecting them, while in others you can claim buildings like mills or quarries, which will generate them for you. However, stage goals are often more complex than just gathering and fixing. Sometimes you will have to fight off enemies, make potions or assemble weapons, and that is where the other characters come into play. During the game, Solar comes across quirky supernatural beings, each with their own particular skill, and they join his merry band in hopes of defeating Grogan. The dwarf is good at forging, the troll breaks heavy stones, the elf is handy with a bow and so on, and you will choose among them according to your current task. 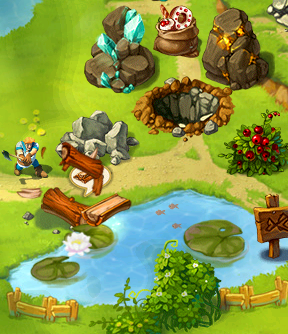 Analysis: Ballad of Solar is thoroughly enjoyable, from start to finish. The level design is clean and intuitive, without unnecessary clutter. One look at the layout is enough to figure out in what order you want to run your errands. The characters, objects and even the scenery look like they've been taken right out of a toy box. There is a troll who likes to draw pretty pictures, workers who turn berries into cupcakes, and even a tiny phoenix with a tinier helmet. If that's not everything you've ever wanted in a time-management game, you don't have a heart. The story begins like your usual fairy-tale, but then it starts making loops and twists as every level gives you a more whimsical quest. Who knew you could defeat a golem with a bucket of water? The characters have their own personalities and contribute to the game's zany humour, which makes dialogues very enjoyable.

Talking about the gameplay mechanics inevitably leads to a comparison with the My Kingdom for the Princess series, and Ballad of Solar wins. Even if you don't take into account the graphics (specifically, their lovingly detailed beauty), it still has superior features. Workers don't have to run back into their tent before you can assign them another task, building-generated resources are picked up by hovering your mouse over them, and the levels are laid out in a more efficient way. The prince actually does some work, and the other characters make the game much more colourful and interesting. Most importantly, there is an actual storyline to follow, as silly as it is at times. Together with the dialogues before and during every level, it makes you feel like you are a part of the fairy-tale, rather than just a player moving workers on a field. In short, Ballad of Solar feels like a complete casual game experience, from the sense of accomplishment when you beat the time limit, right down to the goofy little smile on your face during the closing cutscene.

Escape from the Restroom - Restaurant Edition

5,360 Views
3 Comments
chrpa— Jayisgames needs your help to continue providing quality content. Click for details In a popular Neat Escape's restaurant you went to the restroom, and stayed there. Not voluntarily. You order is being prepared, you're hungry and thirsty but you can't...  ...

2,250 Views
0 Comments
chrpa— Jayisgames needs your help to continue providing quality content. Click for details Welcome to Weekday Puzzle! This week we've got three puzzlers. In a Sokoban-like puzzler by Rob Alvarez (rob1221) you need to create a path of light through...  ...

2,500 Views
23 Comments
chrpa— Jayisgames needs your help to continue providing quality content. Click for details Welcome to the newest Weekday Escape! At the beginning we have a double post by Selfdefiant, escapes from Minnesota and Louisiana - I'm posting the games in...  ...