One-man studio Shining Rock Software's indie sim game Banished is, conceptually at least, pretty simple. There are no wars to wage, no dragons to slay, and the only real goal is staving off the slow march of death via the cruel machinations of nature. Yaaaaaaaaaaay! And yet, despite its seemingly bleak premise and brutal gameplay, Banished is actually one of the most curiously compelling and absorbing games around. You find yourself in control of a group of exiles, struggling to survive with only what they've managed to carry in the wilderness as they attempt to start a new life on a randomly generated landscape. It's all about population management, town design, and maintaining health, happiness, and all the necessary supplies, and the way the world works means you can't just plop buildings down willy-nilly. 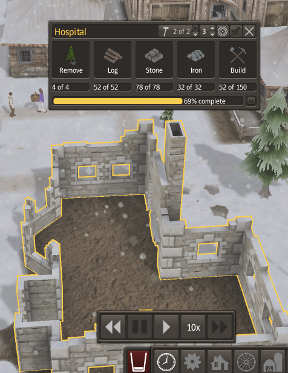 Banished actually comes with several helpful tutorials that will guide you through the basics of everything from construction to resource gathering and more. Presented in top-down Omnipotent-o-Vision, the game allows you to scroll all over your new world and see everything your little exiles are doing. The long term goal is simply to keep them happy and healthy as long as possible while you slowly (oh so slowly) build their rinky-dink little settlement into a sprawling new community. You'll set people to gather rocks and wood for construction of buildings, farmers and hunters to help with food, herbalists and teachers and much, much more. All of this takes a long, long time, so it's a good thing that Banished comes with multiple speed settings, all the way up to 10x, and an active pause that allows you to issue commands even while the game is frozen.

What sets Banished apart from other games in the "try not to die" genre is how complex it is in a myriad of tiny little ways. You'll need foresters to replant what you cut down if you don't want to run out of supplies, roads to speed up passage, tailors to make clothes from materials you create if you don't want to freeze in the winter, a trading post to deal with merchants who might come bearing seeds and livestock... and disasters, of course, because what's life without the spice of infectious disease or tornadoes? Over time, your people will grow, and eventually pass away of old age if the harsh life doesn't kill them first, so nurturing new generations becomes vital, as does assigning jobs to everyone. Because each new game is randomly generated (and various difficulty settings to boot), you'll need to learn how to prioritize tasks to take advantage of the lay of the land. 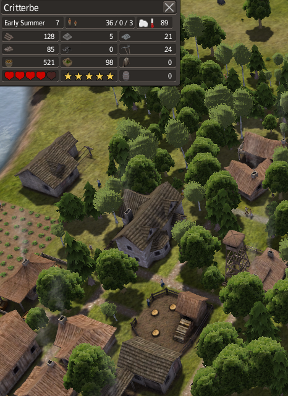 Analysis: Banished is not the game for you if you prefer experiences with clear end goals or any sort of story whatsoever, or if you need more sense of accomplishment than a bigger map, or a connection to your populace. Though all your settlers are named, the lack of any personalities whatsoever makes it hard to be sad for any reason other than you've lost a worker when they die. Banished is a game that's focused on development, planning, and to a certain extent early on, trial and error. Playing the tutorial for the first time is extremely important, since for your initial game you might want to try building everything it tells you to, in the order it tells you to, until you get the hang of things yourself. I spent a lot of time staring vengefully over at the computer my husband was also playing the game on, as his tiny settlement trundled about blissfully like a well-oiled machine, while my people were filthy, cold, and probably two days away from contemplating eating their own poop. So at least it's an accurate representation of what you'd get if you put me in charge of a community's well-being.

It's the sort of game that's not for the impatient, since leaving it on a high speed is a good way to let things get out of hand. There's something quietly compelling about its pace and design, helped along by its simple yet mellow aesthetic and atmosphere, making it the type of game you can sink slowly deeper into for hours at a time. Your goal is simply to prosper, and through both acts of nature in the form of disasters and your own lack of planning, this can be deceptively difficult to do. It's as much about figuring when you need something as what you need. You can take your time, since there's no combat or invasions or anything you typically expect to find in a civilization simulation, and you absolutely should since Banished's quiet compulsion shows itself best when you're sunk down into your chair with a glass of your favourite beverage, long since having turned the speed down to watch your people grow. Banished fills a niche in simulation games often ignored, being both deeper than it appears and yet so extremely simple in objective. Grow. Grow as much as you can. Keep building. And while some players may find the game too slow or, well, not exciting enough, others will appreciate Banished's silent rolling hills and hardy people for the thoughtful, well designed experience it is.

I probably would have been a lot better at this game were I not the sort of person who requires every game to run at WARP SPEED. Give me a fast-forward button and I will abuse it, and this is really one of those games where you can only do that a little at a time as opposed to, uh, well, the nonstop I was doing it. Things just get out of hand too quickly. My husband LOVES this game, though, and he will spend hours just relaxing in the evening with it playing at the default speed. Watching him play, I felt like the Eleventh Doctor. "Is this how time passes normally? So... very... very... slowly?"

I've been enjoying Banished greatly so far, and surprised there's been no discussion here. A mostly easy-to-use interface, lovely peaceful landscape, and so many ways a building decision can lead to doom a few years down the line.

My second town is about 20 years along now, the inhabitants have warm coats, plenty of resources and eat like kings... and the population is dwindling to thirtyish. Workers have died of old age, in childbirth, and from being trampled by wild boars. The leftmost row of houses is now named Sad Bachelors' Row. I'm hoping some nomads will come along to save me, though with my luck they'll probably carry scarlet fever. :)

It is very impressive for a one person project.

I like that there is no half-assed military aspect to it, like some of the other builder games have.

Otherwise I'd compare it to Dwarf Fortress or SimCity. It is much nicer to look at, but not as deep. There are very few cross affection of buildings like noise or pollution, only some happiness from cemeteries as I get it. While this allows one to build ones own idea of a nice city without many rules this leaves little on strategic aspect. Yes keep walking distances short, but even that is very lenient. All of them have in common, while quite complex at first, once you figure out the rules, things become crazily easy. One can only can do rectangular stuff, i kinda miss the arbitrary room layout of DF. Why must stockpile be ractangles for example? Why have they limited length but I can put as many next to each other as I like?

marithlizard, I encountered a similar problem on my first walkthrough, I'd call it the doomed 3rd generation. One must keep building houses in the beginning, albeit nobody is complaining. When there are no new houses the children wont move out and wont have children of their own. Since everyone is mostly young when your city starts, this can leave of everybody of the second generation being beyond fertile age once the first houses become free again due to first generation passing away. Only after a certain size there will be enough variance, so there is a stable coming and going, without a whole generation missing.

All in all it is very relaxing and for that I like it.