What do medieval bards, pink bunnies, dancing bears, and purple witches have in common? Well, it's not a colorful marshmallow cereal, just in case you were wondering. It's a funny, gorgeously drawn cartoon logic puzzle game from Emedion Games. From fuzzy creatures to the inevitable (yet oddly cute) zombies and vampires, Bardadum: The Kingdom Roads provides hours of logic puzzling joy. Because there is no way to feel anything but joy when your bard reaches his lyre and starts to head bang, or your skull finds his bones and starts dancing in his skeleton. You set out on your quest to reach your item of choice and as is the case with most logic path puzzles, you can't cross paths with anyone else in the game. Except when you can. 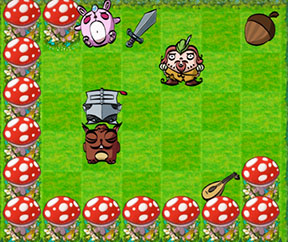 Like other logic path games, this one provides different ways to reach your goal, from sandy strips that allow any and all to cross, to portals and rabbit holes for the quick dodge. In the first map, you're in a green meadow that looks oddly like a golf course, especially once the sand appears. Your happy woodland creatures and the bard and knight who seem to be on this quest together all have a particular item they absolutely must possess...and boy, do they have trouble keeping ahold of them. Most of them are obvious — the bird wants her nest, and the bunny wants his carrot — but if it isn't immediately clear, touching and holding your character will highlight his or her goal item. As you move through the maps from the dungeon to the moat to the castle itself, followed by some wonderful madrigal music that changes with your environment, you'll meet new challenges and even (gulp!) alligators!

On each map, you start in the upper left corner and work your way through the levels to the lower right. Each map has 49 levels, and a consistent, if slow, difficulty curve. As new obstacles and tiles are added, you have several opportunities to try out a new mode of travel before the game begins to combine them. And where a rabbit-hole or a portal ends is not always completely obvious without a little trial and error. Once you reach the X on the map, no matter your route, you will open the hard mode for the map you're on, as well as the next map. And once you complete every level in a map, you also open a Time Attack mode — an extra large level that changes each time you play it. If you're having trouble with a level, you can back out to the map and try again. The level will almost always switch to a mirror image (and if not, keep trying), which will often help you see the path you missed the first time. 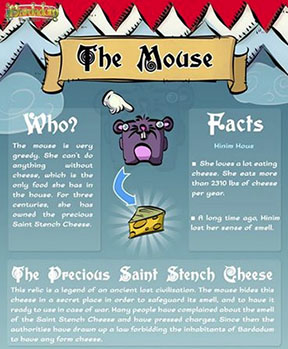 Analysis. As is often the case with puzzle genres that make the jump to iOS, the logic path type seems to have been made for the touchscreen. Bardadum is no exception. The controls are perfect — smooth and clean. Touch to find your goal, swipe to move. The game also makes it clear that certain spaces can't be stopped on by flashing a talk bubble with an exclamation point above the head of your current quester. The backtrail is clearly marked or eliminated to show that you can't go backward, and the special tiles — be they spikes or swimming turtles — don't require much explanation. Since exploration is part of the charm of this game, logic lovers will even enjoy the discoveries that land them in the wrong parts of the board.

As gameplay progresses, the questing critters begin to have to cooperate with each other for all to reach their goals. This is where the game really shines. While it may appear that the bard on the left is going to mirror the skull on the right, it doesn't always work that way and a linear approach can land you in spot with no way out (except that lovely restart button). If there is one thing this game might have benefited from, it's an undo button for a single step back. In some of the larger levels, having to restart when your next-to-last move is wrong can feel like torture (especially if you're playing at midnight because you HAVE to finish a level and your brain keeps tricking you into making the same wrong move 18 times!!! But of course, that didn't happen to anyone we know).

That one issue aside, this game is both whimsical and difficult enough to delight any logic gamer, with enough content for hours of play and yet with short enough levels for brief gameplay interludes. And all without IAPs, in-game ads, or Facebook entreaties (although if you do visit Emedion's Facebook page, you'll find a wonderful backstory for every character and their quest item. It's well worth a glance.). The Android version is a free download with the full version unlockable via in-app purchase, while the iOS release has a full version and the free taster separately. With all this game has to offer, you'll want to do more than taste — you'll want to take that kingdom road to Bardadum with the whole cast of nutty characters.