I love strategy games but they don't always love me back, by which I mean my side is usually the one who dies first with the most wounds. They're the sort of game that requires a lot of planning, a difficult quality to embrace when your inner tactician is actually just Team Fortress 2's Heavy. But Berzerk Studio's BattleCry is one of those games that aims to be just as welcome to players of all skill levels as it does to offer satisfyingly robust gameplay and mechanics for the Sun Tzus amoung us, and includes both a robust single-player campaign as well as multiplayer capability! (Note that you can only play multiplayer if you register for a free GamerSafe account.) 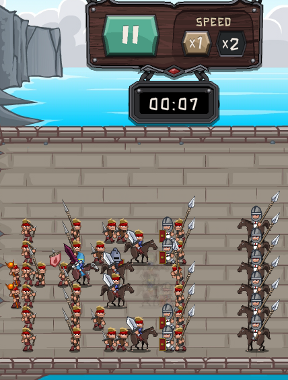 During each battle, your soldiers will fight against the oncoming enemy automatically, and the only input you can offer is to increase the speed. Instead of directing your troops around the battlefield, then, success depends on everything you do to get your army ready... and there's a lot of it. Each army is comprised of five rows you can fill with whatever soldiers you want in any configuration, though you have a points cap that determines how many soldiers you can use that fluctuates depending on unit strength and type. Figuring out how to place soldiers effectively is crucial... archers can attack from far away, but should be safely placed behind melee units due to how soft and squishy they are. Each unit type also has a "cool down" between attacks, so while it might be tempting to steamroll the enemy forces with a powerful class, if it takes your "tanks" too long to ready another attack, chances are the enemies are going to be clambering over their corpses before they get another shot off. As a result, you'll want to pay attention to the attack time of each unit type when setting up your formations so that you're never wasting time standing around, with one unit always ready to attack while the other charges up again. 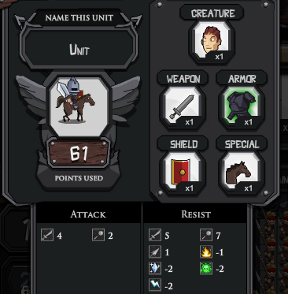 If that sounds fairly straight-forward, well, that's because the meat and potatoes lies in how complex the customisation gets. Humans are your basic soldier, able to do pretty much anything competently, but different species can have better aptitude for certain placement or classes. You'll get special soldiers that provide passive bonuses to other units depending on where you put them. You'll get equipment you can use to make your existing soldiers more powerful, or even create your own heroes from scratch, provided you have a "free" soldier to do so. And speaking of heroes and equipment, in addition to having a whopping five categories of items/soldiers to build your army with (creatures, weapons, shields, armors, and specials), each of those things also comes in four different flavours... common, uncommon, rare, and legendary. As a result, gold, which you can earn in addition to items from battle, is even more important to be able to spend on "booster packs" of equipment once you unlock Act 2... and also the ability to go up against other players in multiplayer. 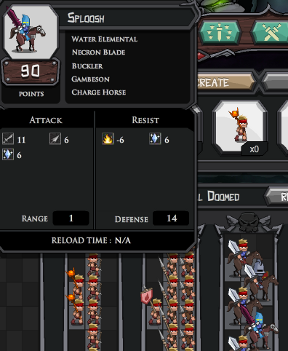 Analysis: BattleCry is a bit of an odd duck, but in a good way. The strictly managerial approach to gameplay isn't one that will sit well with everyone, and the tremendous amount of micro-management once you have to start creating your own units manually from more than a few options can be a bit overwhelming if that isn't your bag. It's a game for people who appreciate the satisfaction of seeing the fruits of careful planning, as well as slow, thoughtful gameplay. It winds up feeling like the emphasis is less on adapting to any given scenario, however, and more on creating the most well-balanced army you can, since you can't see what your opponent's army is comprised of ahead of time. This is especially true since multiplayer involves a series of ranked matches with whatever army you register, and you want that army to be able to hold its ranking whenever it's challenged since that can happen at any time.

Since the best things wind up being available primarily, or at least most reliably, through spending gold on booster packs, it can feel like the person who's willing to spend the most gold (literally, since it can optionally be purchased in-game with real money) is always going to demolish whatever you come up with. On the other hand, success in BattleCry is rarely down to who brought the biggest sword to the fight, and more on who spent the most time configuring their troops, regardless of what those troops actually are. With so many stats determining a unit's strengths and weaknesses and different timers for attacks coming into play, experimenting in how different formations, movement speeds, and equipment setups makes an enormous difference. If you prefer your battles a bit more involving, you might find BattleCry a bit lacking, but sporting a tremendous amount of customisation options for challenging battles and strategy, it's an easy choice for the tactician who wants something casual enough to play with a morning cup of coffee, but involving enough to make you keep coming back for a few skirmishes each day in the long run.

Grinding is a bit weird here - you get the same 200 gold for repeating any level, even the very first!

That is a problem. also, the fact that you have to either grind forever to get good items on your units... i mean i started a game, went through, did the first 'act' said 'great' went into the second act without buying anything and got slaughtered. bought an item pack, got 1 cannon and said ' i can barely doo this'.

Where do you buy things? I can't find any kind of store.

Ah, nm....didn't realize it was only available after beating Act 1.

Yeah, that store is way too hidden. They need to make a big deal of it when it becomes available.

It's a really cool idea, but too grindy. (I realize that you're supposed to pay money so it isn't grindy, but if I'm not having fun, I'm not going to pay for it, sorry... the pay-to-win model just doesn't do it for me.)

PS. After re-reading the review, I see that it's not supposed to be grindy, you're supposed to learn how to play better. I don't see what I'm doing wrong, though, I just keep losing over and over. So replace that with: it needs more instruction OR is just too hard for me.

I want to reiterate that I love this idea, though. I actually had a similar idea myself a while back, but this game handled it way better than I probably would have.

Thanks for the tip about 200 gold coins every repeat!
I just recorded my mouse movement for starting the very first mission, Put it on a loop when i went to bed.. and today when i got on i had 700k gold.. lost the interest in the game, but was fun while it lasted