Hey, you! Go Be a King! In fact, let's do one better. Be a King 2! The casual strategy/simulation series from developer 300AD has returned, boasting excellent visuals, lots of house upgrading and farm building, and tons of ruined villages to spruce up, all in the name of making the medieval world a better place to live. Awww! 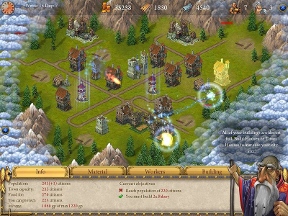 You play as the young prince, son of the late king whose brother took over rule of the kingdom 18 years ago. The new king isn't exactly a nice guy, and he can run a kingdom about as efficiently as he can breakdance to polka music, so it's up to you to travel around the land, fixing up destitute villages so the citizens can, you know, eat and stay alive.

Much like the Build-a-lot series, Be a King 2 turns the focus away from gathering resources and allows you to concentrate on the bigger picture. In this case, your job is to increase the population of each village, ensure there's enough food to go around, and keep the town safe from attack (in addition to level-specific goals). You do this by building houses, farms, barracks, and more advanced versions of the above later in the game.

Your wallet isn't unlimited, though, so you have to do some mild resource management to facilitate repairs and new buildings. Gold, wood, stone, and workers are all you have to keep an eye on. Gold increases every few moments via tax collection. The more citizens you have, the more cash you'll nab. Other resources can be ordered through the menu at the bottom of the screen, and as you unlock new, more complex structures to build, you'll have more resources to take care of as well.

One unique feature of the Be a King series is the ability to hire heroes. Instead of just watching your villagers bumble back and forth with vegetables in their hands, you can hire heroes from the barracks and send them out on side quests. These optional missions can net you gold, bonus materials, and other goodies. Heroes aren't always successful in their adventures, though, so it's important to weigh the cost with the risks and rewards of the extra quest. 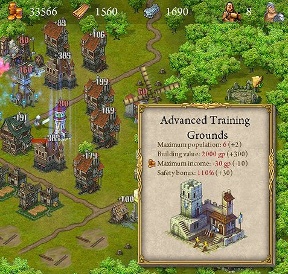 Analysis: Be a King 2 is an exquisitely constructed game with an excellent visual presentation that never fails to impress. Apart from the in-game artwork (landscapes, buildings, maps, etc.), you'll catch a lot of character portraits that look like they belong in a book of fantasy artwork.

The game's design falls somewhere between a casual building game and, thanks to the combat situations, a real-time strategy title. This mixture makes for an exciting experience that's much more engrossing than your typical simulation, and it's always cool to slay dragons and defend villagers from wolf attacks.

Unfortunately for fans of the series, Be a King 2 doesn't offer many new features beyond the first game. The levels, quests and objectives are entirely unique, of course, but if you've saved one village from poverty and starvation you've saved them all. The pacing of the game is still a bit slow for my taste, knocking the challenge factor down a notch and leading to several "come on, let's get to the game!" moments.

Apart from its minor difficulty issues, Be a King 2 is an excellent simulation title that's a worthy successor to the original. Great artwork, simple presentation, and enough content to keep you churning away for hours.

Greetings! Just got the demo version here, and have been doing really well until I get to the west kingdom and was required to rebuild one city and populate it with 300 citizens. I was left with no gold, no wood, no stone, and of course with no gold, I could not buy any of the above. As soon as I could make enough gold to buy resources to build barracks and a farm, trolls came down and beat my heros and destroyed the buildings remaining.
I was offered some gold when I sent a hero to fight a dragon, but it was too late by the time I built a barrack. The trolls broke it down.
Any help you can give me would be greatly appreciated! I am really enjoying this game otherwise.
-David

It took me a while but I finally figured it out. First of all, there are three buildings that will generate income. As soon as you have enough income, repair a building then demolish it, giving you enough gold to repair/demolish another. Do this for all the buildings. When the trolls come, demolish all the bldg. as they get to them. Save your resources. Don't have your heroes fight trolls. Make them go on quests to collect gold.

Then build a barracks and a mage tower and upgrade them as soon as they're built. Then as soon as you can start building lumber and stone mines so they can generate "freebies".

I followed this strategy and got a gold for doing it in 16 weeks.

Don't be concerned about starting over either. Just leave the level and try again.

Please help me. I am on the last but one level (I think, it may be the last)
Where you need 4 Royal barracks and you start with...
(all demolished)
4 town houses, mill, barracks, 2 houses and a trader house.
I have tried so many times to even start this enough to give me a foot hold but whatever I do, I'm attacked far too quickly by trolls who demolish everything.
Please help me.
lisa

I am having difficulty with the second section of the map, the last level. It says income must be 250GP, and apparently no more or less, 4 advanced lumber mills (no problem), wood supply 8000. I just can't figure out how to get my income to be right at 250???? Any ideas?

Just finished the game... the key to the last level is to repair and demolish everything first. use the money to buy materials and make sure you've got 4 workers. then build a stone mine and wood mill. then start building mage towers as quick as you can, build a mage academy and keep building defenses until you can fend of attacks without building damage. once you're confident your buildings will survive start building houses and farms etc. Keep expanding defenses and mines and viola... you've won!

Hope this helps someone.

Here's how I finished the final level

After many attempts I found the way. Repair and demolish all buildings. Use the money to get a total of 4 workers and lots of materials and 2 hero's. Build a stone mine and wood mill. Build as many mage towers as you can and a mage academy. Upgrade everything as quickly as you can. Build a farm so they don't starve but don't bother with other buildings until you can conquer an attack without building damage. Once the attacks are dealt with swiftly start building town houses, farms etc. More stone mines and wood mills are a good idea. Don;t forget to build your royal barracks, leave it til last if you want, just make sure you leave four plots of land or you'll have to demolish houses. DO NOT WORRY ABOUT BEING IN MEGA DEBT. IT DOESN'T MATTER and you can still win!

Hello,
I am Susan and I'm playing Be a King 2 and I'm on level four or so but my problem is that I have no money, so I have to repair a building and sell it. Every time I try to sell it, it demolishes my building. How do you sell a building? There are no hints or tips.

hi,
can anybody help me on level southwood? gather 200 citizen and 20000 woods. Im stuck at this level. any help?