The deliriously cheerful iOS physics puzzler Be Together is one of those games you can feel working its wicked, adorable will on your cheek muscles with every passing second, forcing you to smile. Almost as if the developers, LinkGoGames, had some fiendish ulterior motive... like spreading joy, the fiends! The goal here is to unite your two tittering rotund tots, Maya and Ruby, by dragging their helpful friends around the screen and then tapping the play button in the upper right corner. As soon as you do, either Maya or Ruby will begin to move, dropping or rolling according to gravity until they bump into and interact with something you've placed, hopefully reuniting at the end and grabbing all the stars (and pets!) to unlock more levels. Clouds can be placed to help you bounce, while other characters like the helicopter-headed sprite can carry you short distances. It's not just about minding the gap, however, since hazards like baddies and electric currents also need to be circumvented. Fortunately, restarting a level is as quick as tapping the reset icon, and there's never any penalty for doing so. 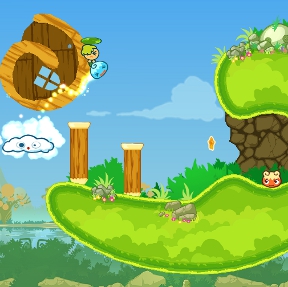 Be Together is a simple concept and certainly nothing you probably haven't seen before, but what sets it apart is how absolutely beautifully made and polished it is. The animation is fluid, the characters are quirky and expressive, and the whole thing from its soundtrack to its gameplay is bouncy, fun, and energetic. It's the sort of game you want to smirk cynically at as characters zip and giggle and grin, but you can't. Mostly because in addition to being more than fine to look at, the actual gameplay can be pretty clever and challenging, and the bizarre little characters are just the icing on the cake. Be Together is the sort of game you'd be glad to have on your child's mobile device because you knew it was actually making them thing, but also the sort of simply beautifully made little physics puzzle you should be proud to have on your own, too.

Be Together
(iPhone, iPad, iPod Touch)