It's Olympics time! The roar of the crowds, the grace of the athletes, everything you love about hidden-object gaming is there...okay, so that isn't an Olympic sport... yet! We're still waiting to hear about certification in 2020 (in our wildest dreams, that is). In the meantime, you can sate your need for competitive object hunting with Jolly Bear Games' newest addition to the Big City Adventure series, Big City Adventure: Vancouver. Find hidden objects in the city currently hosting the winter games and have a lot of fun doing it. And don't forget to write your local Olympic committee about that hidden object thing... 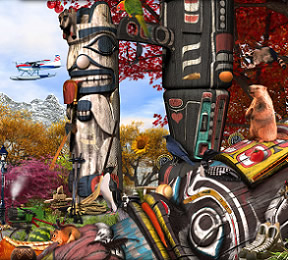 If you've never played any of the Big City Adventures before, the premise is quite simple. Grandma, Grandpa, Mom, Dad, Brother, and Sister are about to take a vacation to the city of Vancouver. Pick one of the family as your avatar and the game begins. You'll be treated to the first location, a popular tourist destination in the city, along with a postcard giving you a bit of trivia about the place. The location then opens along with a list of things to find. You might notice some of the items in the list are blue, that is because hidden within the scene is a...well, hidden scene. Find all of the objects, then play one of the seven rotating mini-games and you'll see your next destination on a city map. The cycle continues with trivia, hidden object scene, and mini-game until you've visited all 23 locations at least three times.

There is a tutorial to get you started, but if you've ever played an hidden-object game before it's not really necessary. A tutorial will show up each time you encounter a mini-game for the first time as well. Otherwise, it's smooth sailing (or skiing) through the wonderful metropolis of Vancouver. The Big City Adventure games are well known for their sneakily hidden objects, most in plain sight, just so cleverly laid out on the background scenery that some are wicked difficult to find. Fortunately, also hidden in the scenery are hint coins that can be used to find one or more objects, add time to the ever ticking countdown clock, or just add extra points to your overall total. The coins and the "hidden" object hunt scenes are highlighted by occasional sparkles in the scenery, so look closely.

Points are gained by rapid finding of the objects, as well as how much time you have left, and how many unused hint coins are in your inventory. At the end of each scene a helpful tally will show up, letting you know if you've beaten the best time or score for that area before you move on. The mini-games are also on a timer, and as you go along you can collect "skip" coins that allow you to skip a game that is taking too long or is too hard. Use these coins sparingly; you don't collect many during the game.

Analysis: The Big City Adventure series is wildly popular with the hidden-object purists, those who love object finding goodness without the overlays of story and movement that you get with the adventure hybrids. The formula has changed little from the first in the series, but why fix what isn't broken? Big City Adventure: Vancouver continues this tradition: still no story, just lots of searching and mini-game goodness. The trivia bits are fun too, for those who might like to visit the city someday or those who will never get around to it. Take it from someone who has been there before, the map and the trivia are spot on, highlighting great places to go if you ever make it to the jewel of British Columbia.

The graphics are bright and beautiful, and evocative of the locations in Vancouver proper. The mini-games include some old favorites from the previous Big City Adventure games as well as a few new additions, like a word search puzzle and a fun mastermind game played with Olympic venue tickets. Although there are a limited number of mini-games that cycle, they increase in difficulty each time you see one. For those who love the genre but don't want to rush, there is a relaxed untimed mode, which is also helpful for the very young or beginners to the field. With over 60 scenes and mini-game in-between, as well as randomly generated lists of objects to find, there's hours and hours of enjoyment and replayablity in this bright, cheerful package.

So if you're enjoying watching the Winter Olympics and thinking, "Hey, that's a place I'd like to visit," you can spend a ton of money to go to Vancouver or you can sit back and enjoy a virtual tour of the city via a Big City Adventure. Just remember, with your help, we can make hidden object finding an Olympic sport! Some day. Maybe. Oh, go find some hidden objects.

I lived in Vancouver for two years, I think I will have to get this and remember all the good times.