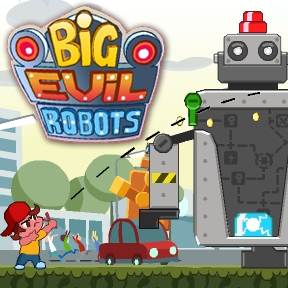 How many times have you been at home relaxing only to discover that a horde of giant, evil robots are once again on the loose, wreaking havoc on the city? Yes, I know, too many times to count. As usual, our bombs are useless and the army is ineffective, but that doesn't stop a small boy with a marble-flinging slingshot from saving the day. And save it he shall (with your help) in Spilgames' latest casual puzzle shooter, Big Evil Robots.

Presented in a Japanese Chibi-anime style, Big Evil Robots is a projectile puzzler that has you controlling a pint-sized protagonist armed with a slingshot and a limited supply of robot core-shattering marbles. Click and drag the mouse to adjust your marble's trajectory, and release to fire away. To destroy each level's mechanical menace, you'll need to send a single shot toward the robot's glass-like core, breaking it (and the robot) in spectacular fashion. You get scored on each level based on the number of shots and how many gold coins you can collect, earning up to 3 stars for an efficient performance.

With each new level, you face a different robot with new internal mechanisms to figure out. In order to skillfully reach each automaton's fragile core, you need to place your shots with accuracy while manipulating various buttons and screws. Shooting red buttons may activate internal gears or raise platforms, while hitting screws loosens them and causes various robot joints to fall to the ground.

With its cute personality and robot-shooting-puzzliness, Big Evil Robots is a fun, short break game certainly worth its weight in marbles. Its cartoony, stylized look fits the mood nicely, while the game's frantic, epic-sounding soundtrack and mechanical sound effects are sure to encourage your desire to kick some robot chassis. With its 15 levels, Big Evil Robots is pretty short, but completionists should enjoy retrying the levels to earn 3 stars. So go ahead: find your marbles, aim steadily, and put those big robots in their place where they belong!

Very nice artwork, very nice setting, the gameplay and puzzles were great although they did start to get a little flatter later on but a pleasure to solve none the less...

Entertaining, though I could've done without the 3-star system - the levels weren't engaging enough to bother going through them again.

Enjoyed the mechanics, and fun overall.

Quit on level 10, which seems impossible, even with

several marbles inside the robot's body, and then hitting the button to reverse the spinner, and keep the marbles rattling around. They never hit the core.

Being able to type R or something to restart would go really far in this game.

Can't beat level 10 either. such a good game till then.

Hit the button on the robot's head. Launch a marble at the yellow joint above the spinning wheel. It falls right off!

There's a big yellow screw you can hit to break some parts.

The game's pace is too slow and the frame rate is too low. My human eyes failed to endure it.

However a game is great in gameplay and idea, if it doesn't handle the basic things well, it's not gonna be attractive. Not to me, at least.

Good effort, a fun play over all. It could have been better if there were more levels and increased game pace.

I just wanted to object (mildly) to the term "completionist," which seems to be used more and more in this context. If anything, i will accept "completist," but even then that only barely works. As you were!

The star system seems to set the bar a little too high in my opinion. I can win in one shot & get all the coins & still only get 2 stars.