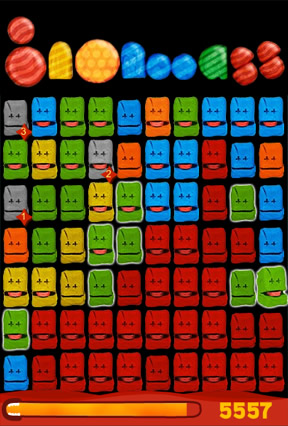 We finally did it. In 2030 the world caves in under starvation and scientists have to take cover underground, away from marauding cannibals, where they perfect a new chemical process in which you combine happy molecules to make some special energy that will feed the people. Listen—Biomass' plot makes about as much sense as its soundtrack. All you need to know is that those smiling blocks from Funflow and SquirrelSquare just LOVE to be matched up.

Strip away the trimmings and Biomass is essentially just another block-elimination game. The aim is to turn one or more rows into the same colour—in this case red. Click on another colour and any other block of that same colour touching the red blocks will change as well. The endgame is to create a row of red blocks, which will then pop into happy society-feeding oblivion (one assumes). Each round adds a new row of blocks and as the difficulty goes up, more colours are added. To win, build up the score bar while making sure you don't run out of rows. Frankly, if this is new to you, one might assume you haven't been involved with this newfangled gaming thing for long...

Biomass hardly changes the genre and it isn't very dynamic in those limitations either. The power-ups do have an effect on how your selection will play out by linking to out-of-reach blocks or morphing into a different colour when not used. Technically they should play as part of your strategy, but it's nearly impossible to isolate them for later use: most of the time any colour available to you in some way touches a special block. It degenerated Biomass a bit too much into a game of luck, but the type where you happily tap your foot on the way to oblivion

What makes it fun is the way it looks and sounds. The soundtrack is unlike anything you have heard before, using a mixture of infectiously upbeat lounge music, random quotes from Martin Luther King Jr., the legend of Baba Yaga and other nuanced pop culture tidbits (was that The Wailers?) mixed into what sounds like a radio buzzing from one station to another. A soundtrack for a happy apocalypse. The blocks themselves look like they are made from clay and frequently grin, smile and stick out their tongues. It's altogether very charming and means you will play a lot of the game before it really starts to wear on you, much like an overbearing but insanely colourful children's show

Biomass wins on style and will endure for a while, plus it has 'diplomas' you can spam your Facebook friends with. And before the lack of substance and the soundtrack eventually turns you away, it will have given you a good bit of entertainment.

Hey James, thanks for great review! Hope guys you really enjoy our game :)

I always fail when the purples appear. without fail. no matter what strategy I use.
Am I missing something?

Actually, the sound track reminds me of the Alice is Dead series~

in fact it never ending game, target is collect as more points as possible

I played this for a while last night. It's sort of fun, but I never felt like I was really making any sort of meaningful choice. Since you can't click a second color after you click one that will result in a line clear, it seems like the best solution is to pick a row where you can quickly tap two or three colors in fast succession so they all clear at once. Even then I lost after round 3 or 4.

Contrary to the review, I never felt like the powerups had any impact on the game. You can't click them directly, and clicking on adjacent blocks seems no more effective that simply clicking stuff in any other row.

I just really didn't get into this. I didn't feel like my input had any meaningful influence over whether I win or lose. I'm sure there's a strategy there, but I didn't get it.

Well, they do have an impact - particularly the ones that change if you do not engage them early on. But I agree that they don't have much use since you never use them directly.

Remember that only areas that are adjacent or will be adjacent to red tiles will become "infected". Thus the idea is to try to penetrate as deeply into the areas as possible, rather than just clear rows. As you can infect all of one color at a time, it might be a good idea to hold up clearing rows as it will reduce the effect of future turns. However, remember that special effects are time limited, and near the "end" (5 or 6/8) you will need to use those pieces to your advantage.

Are you not capable of reaching 8/8? At that point it seems to turn into an infinite game and the bar below does not fill. Or is it the fact that when it says Generation 7/8, you're actually on the 8th (and completed the 7th)?

Oh, I just realized that it doesn't add another row unless I click. I had assumed that I was losing because I wasn't going fast enough.

That greatly changes the way to play. I might have to play this more with this newfound knowledge to get a better feeling for the game.

Initially I was going to comment on the seemingly apathetic quality of just clicking to remove rows, and the random power-ups that the player has no direct contact with. But after reading the above comments, I went back and played again, and more than doubled my score. I have a feeling that the more you play the more strategies will become apparent.
Nice graphics, sound and music.
:)

I think the best way to survive in this way is to create the longest chain you can before you cancel a row by turning it red.

Leave just 1 color in the rows and try to leave only the same color in the other rows. This expands the "red" area greatly, and therefore is much easier to reach into pretty much all the blocks.

When the beaker is nearly full detonate all the rows by clicking the left out color. You will not only cancel out about half the rows, it also gives a score multiplier and can help you skip through a lot of hard work, and potentially losing the game during the hard work.

I'm pretty sure the cabin line is from the Russo-Finnish film "Jack Frost" and the goofiest scene in cinema existence. It's also a great MST3k episode. But the "Hunchback Fairy's" cabin is a similar deal to Baba Yaga's house.

I'm seeing complaints on many game hosting sites that this game has stopped loading for people, all across the internet.