Bitter Sam is... well, bitter, and justifiably so. His grades are failing, he was stood up at the altar, he still lives with his mother, and now some mad scientist has kidnapped him and is lowering him down some sort of hole through the levels underneath his lab. Sam's only lifeline to the surface a thin thread that is easily snapped, forcing him to dodge dangerous obstacles as he drops deeper into the Earth. Thus is the premise of Bitter Sam, an amusing physics drop/avoidance tilt puzzler from Moon Active, which charts poor Sam's progress as he falls farther away from the sunny skies above. 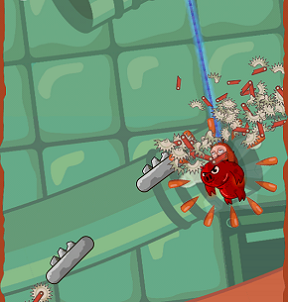 The mechanics of Bitter Sam are as simple as simple gets. As Sam falls through the scenery, it is up to you to help him avoid obstacles such as sharp rock shelves, breakable wooden shelves, nasty razor shelves (which will not only kill Sam but will cut his lifeline if not avoided correctly), and rotating wheels which can crush the poor guy if he's caught between them. Along the way Sam can pick up helpful power ups such as an inflatable pig (just go with it) which can help him break a stone or razor shelf, steroid injections for the pig which can turn it into a giant, red, raging boar, and a heavy anvil that drags Sam quickly through the level while destroying anything in its path. Each area has 20 levels of avoidance madness, and each level contains a mysterious gem which Sam must also attempt to collect while avoiding the numerous and painful looking ways to die.

Points are given for making it to the bottom of a level, finding (and retrieving) crystals, and for completing a level without bumping into the walls or other obstacles. Once you've conquered all 100 levels you can still go back to try and get the crystals if you missed them, or achieve that mythical perfect score (which involves both finding the crystal and making it through a level without any bumps). With so many stages to fight through (and the promise of more in the future) Bitter Sam is an amusing little time waster for the iPhone, iPad, or iPod Touch that's only going to get better with time. And besides being fun, don't you want to help a poor schlub like Sam earn a little ray of happiness from time to time?

NOTE: This game was played and reviewed on an iPhone. Game was available in the North American market at the time of publication, but may not be available in other territories. Please see individual app market pages for purchasing info.