It's tempting to fake redact half of this review, just to fit in with the theme of Blackbar. We'll resist the temptation, though, as this is a game that's worth talking about. Created by Neven Mrgan and James Moore, Blackbar is a word-based puzzle game where you sift through letters written to and from characters and try to figure out which words were blanked out by the Department of Communications. It's one part sci-fi story game, one part political statement, and three parts just plain awesome. 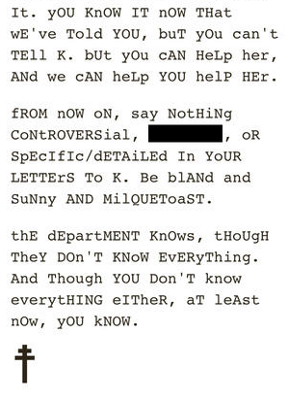 Censorship has generally been a problem left for futuristic dystopian novels to deal with while we go about our happy modern lives. With news stories of widespread unauthorized spying piling up each week, your average citizen is slowly realizing how this problem isn't just fiction. Blackbar addresses censorship on a very personal level, feeding you private letters that have certain words blocked out by a sort of of Big Brother. The characters have a difficult time knowing what's happening in each other's lives, forcing them to talk about safe, sterilized topics that won't get censored. We won't go into spoiling the events of the game, but seeing how things unfold from the perspective of real people makes things feel all the more real.

Figuring out the missing words is usually a logical process, though occasionally get stumped. The game gives you decent clues and shows you how many letters each box should be filled with, so even when you do have to guess, you won't be stuck for too long. Blackbar has a message behind its gameplay, but it doesn't sacrifice anything to force it on you. It's a good puzzle game that's well-written and entertaining, with just a touch of a deeper message to hit a few concepts home.

what place does the resistance reside in?

It's driving me crazy trying to figure it out.

Did you go back to the beginning and reread the earlier letters?

The residence riddle was hard. To solve it:

Look at the capital letters!