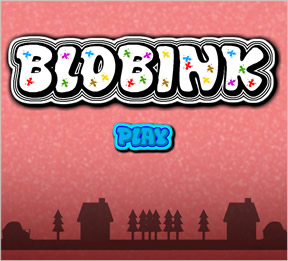 Oh noes! The Water Mafia has stole all our kullers! And kidnaped our grilfiend (that we dint even no we had)! What to do?

Never fear, dear BlobInk (er, you are BlobInk... work with me here), you have the power to restore colour and rescue the girlfriend you never knew you had and who doesn't appear in the game(!) Simply race around these levels, touching each item as you go, and the world will once again be saturated in beautiful R, G & B. Don't fall into the water! You're an ink blob!

Don't rush it at first—you're a fast, smooth machine - er, blob—and if you're in too much of a hurry you'll go hurtling straight into the water, losing experience points. Once you've run through all fifteen levels, you'll be given a thousand bonus points and a chance to explore the more RPG aspects of the game: buy powers, gain levels and read the hilarious game text for those levels. (My favourite - "Level 4: Waiter. More than just a servant, you deliver. You deliver hard. With your trusty, trademark plate by your side, you realise you need no other companion in life. You also smell really good.")

Analysis: BlobInk has the potential to be a really interesting combination of role-playing and physics game. I say potential because at the moment, it's a kind of fun physics game, and the desire to beat the clock to gain rewards makes it eminently replayable (I've been bashing away at it all day in the hope of reading the Ancient Book of Blobland). However, there's only 15 levels, which are not amazingly hard to beat, and the RPG element consists of... reading the hilarious game text describing your level. It seems that BlobInk is an early version of a more developed game (Coming Soon: BlobInk Multiplayer!), which I'm really looking forward to because I think this is a great idea.

I have a couple of minor technical quibbles: there's no save point (although you'll find it's a very easy game to simply beat, as opposed to gaining bonus time points, you may have some good reason that you can't play for a half-hour sitting) and there doesn't seem to be any way of turning off that insanely jaunty music. Another thing is that when you beat a level, a big black blob obscures the game screen so you can't sit back and admire your handiwork.

Aside from that, BlobInk is at the least a fairly enjoyable physics game which has the potential to be a really unique adventure game. Give it a shot and be sure to leave any brilliant RPG-related ideas in the comments.

Be sure to play the other Acrid Rose games reviewed here at JIG.

extremely charming! failed twice (I was too fast...), but after all, I had a very good time! looking forward to the sequel!

If that evil Water Mafia took all the colors how come they left black and white?

Fun but too short. I'm too lazy to replay it for the levels and such at the moment, but I might later.

bioLarzen, white and black aren't actually colors; white is all the colors blended and black is the absence of color. :P leave it to an artist's wife, hahaha.

I thought it was a fun game, but some of the powerups are completely useless! I saved ub for the brush, and when I clicked on it it did in fact color five things. I colored the rest, but the level did not end. I found I needed to go back and touch the ones painted by the brush! it was horrible! such a waste of time points...

I found the game boring, but liked the music during "story". Is it credited somewhere?

sorry for the double post, but I tried the brush later and it worked fine. I think it may just be the lightposts that the brush doesn't work on.

there's a reference to the Thief series in your second level as thief. It's said that you follow Garret's steps, that's the protagonist in the Thief game series.

This game is really a bit too short. The levels are not very difficult as the article mentions.
I agree with Gryphon78 that some powerups are really not useful, considering that there are only 15 stages, and some are only useful in some stages. I bought the thricecard which will open three doors, but in one stages it only opens two. In some stages, the bonus timepoints is quite impossible to get, e.g. in some river stages and cave stages. There are some minor problems as well. But generally I like the occupations of the blobs and also the interesting gameplay :)

I leveled up untill "Mage". then I stopped and left. Mage is level 17.

You don't get anything special

Bug/exploit for bonus points up the wazoo:

1. Get the "clock" powerup.
2. Let the bonus time run out on a level.
3. Activate the powerup. The newly added points for the level will not count down!
4. For extra profit, sit around and let the powerup recharge. You can then activate it again for even more bonus points.
Eventually though, e.g. after you've powered up the brush to the max, the time you'll spend sitting around for the recharge or the time to run out becomes greater than the time to do the level itself. Then just hit the clock powerup slightly before (or even slightly after) you've painted the last object.

I'm pretty sure a few of those songs are from the movie version of Chicago. I know the music during the powerup/storytelling screen definitely is.

it should be made a fact that casual games need a music off button. Honestly, this games music is so loud.

To get a huge number of time points, type into the box

"I want more points than God".

Anyone know the name of the song or who sings it at the end when the plug for their website is displayed?

Does anyone know the xp code?

Not really sure about the appeal of gameplay, though...

skooge80, your code isn't working for me. Do you need the punctuation?

Entertaining for a while. I am glad I did not buy/open the book until last, because the text wouldn't close, and made the game nearly unplayable. Yup, I made it to Job 20, and only made a little use of Geer's cheat.

joye, try typing it in all in lowercase, no punctuation. That's the only way it worked for me.

For once I'm the naysayer.. I can't see the appeal in this. I played through the first time, found the gameplay among the most basic yet clunky I've seen on JiG, and kept playing purely for the increasingly dire descriptions of the jobs up til level 6, and the menu music.

It has the right elements to be addictive for those in an extremely bored state of mind, namely pointless 'levelling', the gift left us by the early mainstream MMOs, as well as Diablo and it's kin...

A good sense of humour and a great taste in music for the most part, but not enough to glaze my eyes to a rather shallow, dull game.

I'm kind of with Jakkar. The gameplay was nearly nonexistent, since there was no real challenge to anything you were being asked to do. The levelling system was there just as a way to artificially lengthen the game, with no real benefit to doing it.

And for those interested, the vast majority of the music comes from the video game "No One Lives Forever" by Monolith. A really fantastic game, if you can track it down.

LOVE the music from Chicago

Anybody else unable to click Play? It doesn't do anything for me.. Only the home button works.

The xp cheat is

I had the same problem but then realized that you have to scroll down. That's where the game screen is. The thing that says "play Blobink" doesn't really matter.

Does anyone find a distinct similarity between this and

@jodabomb24: Yes, the game author even cites it as an inspiration. On a side note, the Wii game has an incredible soundtrack. The game is worth buying just for that, IMO.

does anyone know how to buy powerups?Ive played the whole game twice and i still can find out how to buy stuff