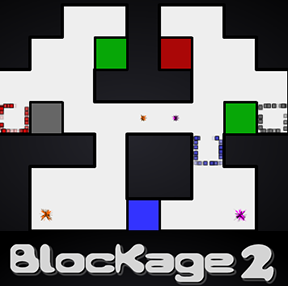 A year ago, the puzzle game Blockage featured twenty levels of block-moving puzzle joy, but the game had a few rough edges. Now Guillhermo v.S. Heldt has come out with Blockage 2, and it's smoothed these over completely while preserving the essential brain-teasing fun. Plus, the game features a level editor where you can create your own puzzle and share it with the world. This also means a potential of infinite user-created puzzles in addition to the game's thirty levels. Let's get this blockage cleared!

You have a number of colored or grey blocks and a number of similarly color-coded targets. Naturally, all the targets must be filled. Also naturally, there's usually not an obvious way to do that. Colored blocks pass through each other, while grey blocks don't. Single use teleporters and painting spaces can help or hinder your progress.

Blockage 2 fixes the biggest user interface problem of the previous game by allowing pure keyboard controls. Cycle through blocks with [Q/E], and once a block is selected (it will be highlighted), move it with [A/D] (or the arrow keys). Hit [space] to solidify a block. [Z] will undo your last action, and you can keep hitting it all the way back to the beginning of the level if you want, although you should probably hit [R] to reset if that's your goal. Once you beat a level, [space] will quickly take you to the next. You can also use the mouse to select blocks or click on the controls in the lower right, but the keyboard is definitely an easier interface. 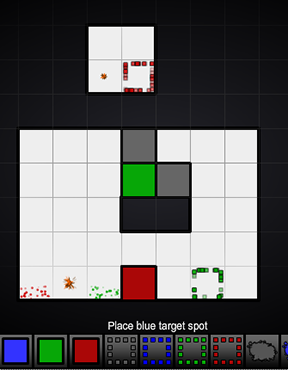 Analysis: In addition to this big improvement to the user interface, Blockage 2 gives more levels over all and a slightly higher level of challenge, especially in the latter half of the game. It's still not as nail-bitingly hard, nor does it have any many kinds of challenges, as the similar Blocks With Letters On series, but that series could actually take a few notes from this one. Particularly the undo button, which saves you from the agony of being close to solving an intricate puzzle and then accidentally hitting a button once too often and messing it all up. This doesn't take away from the legitimate challenge of the game, but it does make the challenge seem more fair, and ultimately that makes the game more fun. The soothing, ambient soundtrack and simple geometric art also help tone down the frustration potential.

The level editor enables you to make puzzles as easy or as fiendish as your mind can dream up, with all the tiles from the regular game available. Just remember you have to paint free space down first in order to put things into it. The ability to sort user-created levels by rating or date allows you to find the best out there or what's new since your last visit. All in all, Blockage 2 is a big improvement on an already fun concept.

Rather than a traditional "step by step" walkthrough, this text guide describes the solution in a more general way, so that you have the satsifaction of getting the steps done yourself. Some levels have multiple ways to solve them.

Thanks to James for his solutions to levels 24 and 25!

I liked the meaning of the ending of level 10.

Rather than a traditional "step by step" walkthrough, this text guide describes the solution in a more general way, so that you have the satsifaction of getting the steps done yourself. Some levels have multiple ways to solve them.

Thanks to James for his solutions to levels 24 and 25!

One of my most favorite puzzle games, glad to see a sequel of this game

I think it's an awesome sequel to an already awesome game.

I found the controls really irritating. The ability to remap the keys would have made this playable.

Great quiz. I don't remember ever playing Blockage 1, but although I liked Blocks With Letters On (and its sequels), I found it too hard sometimes. This game is still quite a head-scratcher, but without the extra dimensions of BWLO.

Never tried to write a walkthrough before, so here goes.

Some of the custom levels are technically unbeatable, but somehow still got good ratings. Is there some secret trick with teleporting that allow you to beat these levels? Take for instance "Best Ever" by unknown. The only teleports that go to the exit are right above it and are impossible to reach. Help!

They have to beat the stage they created to publish it, so they are all beatable :)

I didn't need to use the orange teleporter for level 21.

The editor has a bug. If you include too many teleporters in your level, then some will be changed to painting spaces when the level is stored. Unfortunately, this bug does not apply when you solve your level to validate it.
This means that some levels are indeed unsolvable.
You may detect if the bug applies by choosing "keep editing" instead of "publish it" after solving your level. If some of your teleporters are changed to painting spaces, then you are in trouble.
I created a level called "teleporter bug" which has too many teleporter yet remains feasible.
From personal experience, it seems that you can use up to 12 teleporters before the bug occurs (although you may encounter problems if you destroy and recreate teleporters while developing your level)

The site linked seems to be down (permanently or not, I don't know).

[Links fixed in the review above to point to our own hosted version. Thanks for the note. -Jay]

5,323 Views
1 Comment
jayisgames.com— Most people who have encountered computer games have either a negative or a positive opinion about this pastime. For many years, disputes between opponents and supporters of computer games have not subsided, and they have the most diverse arguments....  ...

7,660 Views
4 Comments
chrpa— Jayisgames needs your help to continue providing quality content. Click for details Mobile users may already know Snapbreak's puzzle games, Doors: Paradox and its predecessors are available for some time on both leading platforms. Pc users now can try the...  ...

6,348 Views
0 Comments
chrpa— Jayisgames needs your help to continue providing quality content. Click for details Welcome to the Roundup 42 with three games! As mentioned in the previous roundups, only odd-numbered episodes are featured since even-numbered are for Robin Vencel's patrons. More...  ...