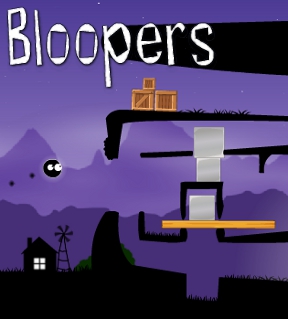 Bloopers is a short physics game of destruction similar to Crush the Castle, Angry Birds, Sieger, and countless other browser-based diversions of a similar type. Here, you play the role of little black blobs who own a really great cannon. One day, one of the blobs sees a lightbulb. He goes insane with rage, immediately smashing the bulb's delicate glass exterior. Only when the light has been extinguished is the blob happy, and thus they set out across the land, using physics to destroy lightbulbs that plague their very existence!

Ok, so that exaggerated storyline may be a bit over dramatic, but you get the picture. Getting rid of the bulbs requires you to knock down a number of strange buildings, each constructed with different materials that must be knocked over, broken, pushed out of the way, or blasted to smithereens. At first you only have one type of basic blob to use, but eventually you gain access to large kamikaze blobs that explode seconds after impact. Much more useful for breakin' stuff, wouldn't you agree?

To get the blobs moving, simply click and drag the cursor over the cannon. Pick a direction and slide outward to choose velocity, then release to fire. You have a limited number of blobs for each level, and oftentimes you have to clear the path to the bulbs in several steps, so be conservative and plan your moves carefully.

Bloopers is a small game, it's a simple game, and it's not the most challenging game in the 'verse, but it's got charm and a whole lot of entertainment value, and that counts for something. A great one to bring the kids, even the smallest ones, in to have some casual gaming fun!

Very fun but definitely short and easy. Excited for a much more developed sequel!! It reminded me of that grenade tossing game and while back, in a good way.

As others mentioned in the Kongregate comments: It doesn't make any sense to have to destroy stuff to get stars. If you can get the light bulb in one shot without destroying anything, you should not get one star out of three.