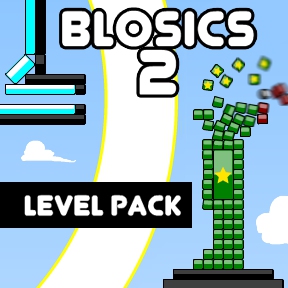 Tell me, what's more satisfying than building an intricate structure of carefully-placed, precariously-balanced green blocks? Watching it crumble, that's what. Seeing each individual piece delightfully spin and bounce off each other with cold, hard physics goodness, heading towards sweet, off-screen oblivion. Then again, I guess some people just like building stuff. Well now you can do BOTH. Jacek Perzanowski's Igrek Productions has opened up his popular Blosics 2 to the masses and presents the Blosics 2 Level Pack, which lets you build new levels and challenge yourself to 30 new stages created by many different level designers.

For those unacquainted with the Blosics series, the object is to use projectile physics to knock down structures, earning enough points to move on to the next level. Your arsenal consists of various-sized balls, some with unlockable properties. Starting in a special shooting zone, you click and pull back your shots, rubber-band style, before letting them fly. Bigger and heavier balls cost more points to fire, so ball selection and careful aim is crucial. Green blocks earn you points, while red blocks take points away. Adding to the challenge are various surfaces (stone, rubber, and ice), exploding blocks, and floating balloon blocks. For added replayability, each level also has a special challenge, such as reaching the point goal with only one shot. Overcoming challenges give you credits towards new unlockable projectiles.

Play all the Blosics games:

The highlight of the Blosics 2 Level Pack is its 30 new levels, and they are an interesting mix of fun, challenge, and silliness. Some levels require perfect accuracy, while others (such as the "Ready... Aim..." level) are exercises in pure awesome. Since this is a level pack made by different designers, there isn't really the same type of ramp up in difficulty like in Blosics 2, and some levels (especially the challenges) seem extremely hard by the middle of the game. A few stages practically require the use of the unlockable projectiles, especially to complete some of the tricky challenges. In addition to the new levels, fans will be happy to notice the game's easy-to-use, robust level editor, which allows you to import and export levels as lines of text. The editor even saves images of your level design for easy posting.

While not a true sequel, Blosics 2 Level Pack provides fans with a new batch of challenges they've been sorely waiting for. Aside from the editor and levels, there's not much new here, but with its solid physics system and nice graphical quality (I still love those blur effects), the Blosics 2 engine doesn't really need many changes. So raise a toast to physics as you either enjoy this latest round of block smashing fun or create your own falling structures, feeling that sense of true satisfaction you so richly deserve.

I enjoyed this series and was glad to see this one came out. However I quit partway through because of the levels demanding perfect shots. Do the level designers actually think they're fun?

Yeah the levels are super hard, and I didn't get my freeze unlockable!

It's been so long since i've played blosics, i can't remember what the key is for the remote detonator, and as near as i can see, they don't have a page that describes each bonus ball, the page i'd think would tell me how to remote detonate that ball.

Beauty of posting. :) Found it on the Level Select screen at the bottom.

Read the walkthrough, watched the video, can't do 12.

Which is a shame, because I loved Blosics 2 dearly. Seems a pity to miss out on the rest of this because of one level.

Okay, here's a much easier solution for 12:

Just slam an explosive block into the wall just to the left of the launch zone. The blast will send some red blocks over into the green blocks.

You won't maximize your score due to the red blocks, but this is an easy route to meeting the level challenge as well.

cool game kinda testy if you are not patient.. So hang in there. but good and challenging.

Every installment of Blosics seems to be broken currently. Wish I could play.

[Why do you say it's broken? The game loads and plays just fine. I suggest you try updating your Flash Player and disabling your browser extensions (especially ad blockers). Free Flash games are ad supported. -Jay]

I am stuck on the last Level! Please help!!!

The collision detection on this game is TERRIBLE.

Level 16 is a nightmare, with the green blocks on the left column slamming right into the ones in the right and not budging them an inch, instead inexplicably triggering the explosive blocks despite not going anywhere near them.

And on level 9, the red blocks keep clipping right through the greens, moving further left in the stack. It's embarrassingly bad.

1,359 Views
0 Comments
chrpa— Jayisgames needs your help to continue providing quality content. Click for details Welcome to Mobile Monday! Big devs didn't miss an opportunity to make a Halloween themed game and so we have several games in purple and orange design...  ...

8,128 Views
5 Comments
chrpa— Jayisgames needs your help to continue providing quality content. Click for details Masa's games have a simple and clean graphics, and perfectly logic puzzles. The hints are absolutely clear and the only thing which you need is your brain and...  ...