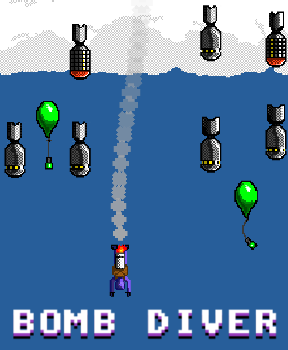 You know, sometimes two great tastes taste great together. Peanut butter and jelly, for instance, or honey and bananas. Bomb Diver, an arcade shooter with defense elements by Hybrid Mind Studios, takes this to the next level by offering three great tastes that taste great together, like... mayonnaise, root beer and tuna, maybe? While I try to come up with a better example, you'll need to hit the skies with your jetpack and parachute on the way to save a city from a barrage of bombs!

Each stage consists of three phases. In the first, steer your jetpack with the [mouse] and avoid the bombs; touching them will cost you health! As you near the bottom of the wave of bombs, various colored balloons will start to appear. Grab these for ammo; later, health and power-up balloons usable with [1], [2], [3] and [4] are added to the swarm and you'll want to nab those as well. After you've dodged the bombs you'll deploy your parachute. Steer it with the [mouse] and grab as many balloons as you can. Finally, you'll land in the midst of a city. You'll need to use the ammo you grabbed earlier to blast the bombs you just dodged before they blow up that city. Run around with the [WASD] or [arrow] keys and aim and fire with the mouse.

Much like Missile Command, destroyed bombs produce explosions that can destroy more bombs. This sort of chain reaction is not only ammo-efficient, it also earns you extra money for buying upgrades after each stage, as does grabbing balloons and keeping the city perfectly safe. Available upgrades include handling boosts for your jetpack and parachute, max health increases and wider explosions. You'll need these to help deal with the increasing difficulty of each stage! While you've only got bombs to deal with at first, the enemy quickly ramps up their offensive and starts sending in mines, fighter jets and other menaces. Watch out, though; if either you or the city runs out of health, you're toast and it's time to try again.

Any of this game's three phases wouldn't be all that great individually. Putting them together, though, makes for a fantastic mix. You're not stuck doing one thing for long enough that it becomes stale. Variety is the spice of life, and Bomb Diver just might be your paprika, so all you daredevils out there owe it to yourselves to give it a shot!

That was pretty fun, though entertainingly aggravating when you realised that you had to let some bombs strike your city towards the end, as you were low on ammo. Managed to get 7th all-time score, though can't imagine that'll last long.