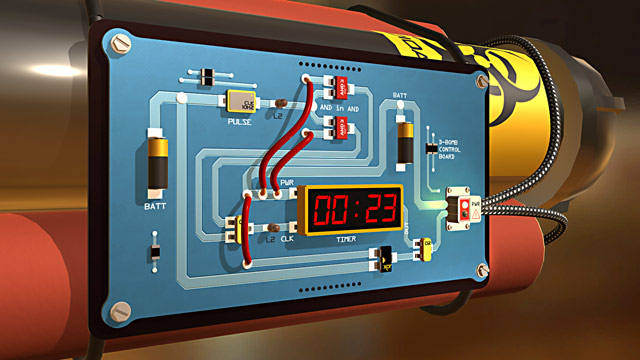 Normally, if someone tells you to have a blast, it's to wish you well and hope that you have a great time. Things are somewhat different, however, at your new job in the Bomb Squad Academy. As a matter of fact, your very occupation is the antithesis of making things go boom. Your objective is to successfully diffuse electrical circuits hooked up to a live (virtual, fortunately!) bomb and disable them, often with a timer running in the background. You'll have several instruments to aid you in your task, including wire cutters and the ability to flip switches thus controlling the path of electrical circuits.

The controls are fairly simple, can be manipulated with the mouse, and are explained in-game. As new, more complex features are introduced, such as logic gates, the game also describes their functions and hints at solutions, then throws you right into a more complicated puzzle you can solve yourself. The version of Bomb Squad Academy linked isn't very long and is intended mainly as a demo, but it does have some solid playtime and a few laughs, including one level whereby displays light up as you solve it to print your fate. The only complaint I really had with this game is that the volume levelling is rather uneven, so you may want to turn down your speakers before playing, unless you want the all-too-real feeling of having your eardrums blown out as well!