Everyone remember Boulder Dash? Back in 1984, a little developer called First Star Software released a puzzle/arcade game for Atari 8-bit computers that featured a treasure-hungry character named Rockford who spent his time digging through dirt looking for gems the size of himself. Turns out that activity worked out quite well for him, and it worked out well for us players, too, as the game thrived over the decades with a number of sequels and ports to other systems. Now, almost 30 years later, the hunt goes in in Boulder Dash-XL, a re-imagined and updated version of the classic game that has finally made its way to mobile devices. And you know what? It's still a pretty good time! 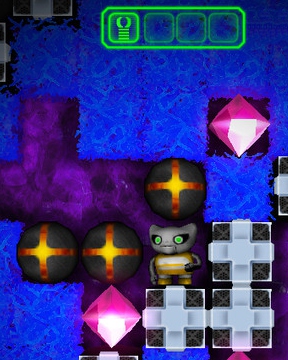 Boulder Dash-XL puts you in control of Rockford or his pal, but this time it's robotic miners, not an adventurous human treasure hunter. Either way, the gameplay is very much the same, and you'll spend most of your time digging through blocks of dirt, going for the valuables to unlock the exit while trying to avoid boulders and plenty of other traps. Things start off a little slow but quickly turn around with bigger, more complex levels and challenges. Think boulders that only roll when you move out of the way are tame? You just wait, sir or madam!

The visual upgrades make Boulder Dash-XL easier on the eyes than the flat, color-sparse early games, and If "plain old" gem hunting isn't enough, you can also have a hack at puzzle, zen, or score attack modes, or even turn things old school with retro mode! The controls, sadly, aren't quite what they should be, but given that virtual buttons are rarely what we expect when physical controls are by far the superior choice, there's a little room for forgiveness. Boulder Dash may not be as stunning or original as it was a few decades ago, but you can't keep a good puzzle game down. A great nostalgic puzzle time for some players, and a great puzzle experience for others who wish they could be nostalgic about it!