Bread Kittens is a free iOS adventure/RPG game where you travel around Catlandia, training and battling cats Pokemon style, in an effort to save them from the tainted pet food that has made them aggressive... by putting bread on their heads. Ain't even kidding. Bake º450 is to blame/praise for this evil/brilliant premise that stuffs simple, cute, addictive gameplay down your eyeholes. It's simple. Tap to an icon on the map to travel there, and battle kittens that attack along the way. During battle, tap anywhere onscreen to fight back, but try to time it when the meter at the bottom of the screen hits the gold bar in the middle for extra damage. Use cat chow to replenish your health when it gets low, and hurl bread at your enemy when their health gets low to try to capture them and add them to your team! 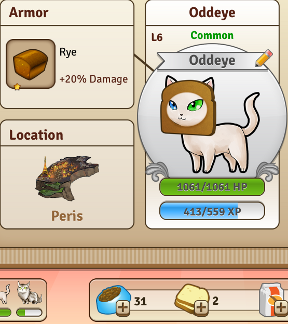 Of course, you don't have an infinite supply of bread... you have to bake it, and doing so costs flour, which is earned from battles, and takes real time... unless you spend Meowbux to speed it up. It's not just about sliced bread either, since you'll unlock other recipes that you can use to bake special items that will boost your kitties' abilities... when equipped on their heads, of course. Each region you'll travel to has its own unique kittens to capture, with everything from plain tabbies to ultra rare exotic breeds. You can even send friend requests to other players and do kitten battle with them. It's exactly the sort of thing that would get you arrested and turned into the subject of a psychological case study in real life, but with adorable visuals, chirpy sound-effects, and the sort of "whenever you get the chance" gameplay the iOS was made for, it's somehow still endearing.

So what's the downside? Monetization and simplicity. While things like flour, chow, and even Meowbux can be earned through regular gameplay, they're doled out so slowly you really have to grind battles if you don't want to pay out. Especially when it comes to Meowbux. The simplicity of the one-button combat style that makes up the meat and potatoes of it all starts to wear out its welcome, and its silly story just sort of drops off the face of the earth after your ginger kitty sasses you through a tutorial. As a concept, Bread Kittens has tremendous potential. It's beautifully illustrated, wonderfully wacky, and something that fills up whatever time you give it, no matter how much or how little. At the moment, we can only hope that eventually earning the in-game currency is tweaked to become a bit more generous, but as it stands, as long as you know what you're getting going into it, Bread Kittens is a simple yet strangely compelling formula well worth at least checking out.

That game sounds delightfully mad. I think Nyan Cat might be to blame on some level.

I have this game. There's actually an achievement for putting a toaster pastry on a kitten. Guess what it's called.

I have this game and it is awesome!