It's the end of the world was we know it, and we feel fine... mostly because we're now all hideous undead monstrosities. But that hasn't kept (un)life from moving on, and towns full of people still exist... they're just deader than they were before. Dem is a great hero, if a bit on the bony side, who works hard to defend the nearby town of boils and ghouls from threat and isn't really interested in seeing what the rest of the world has to offer. That is, until the day the exuberant, pushy ghost Sara forcibly joins forces with him and drags him off on a journey to visit the great ruins from around the world and annoy him as much as possible in the process. Chock full of gaming references, strategic turn-based battles, geeky vampires, zombie princes, antiheroes, and even the obligatory sewer level (it's the law), Breath of Death VII is the perfect afternoon RPG parody treat from Zeboyd Games for anyone who remembers an era when 16-bit was the height of fashion and the cartridge was king. 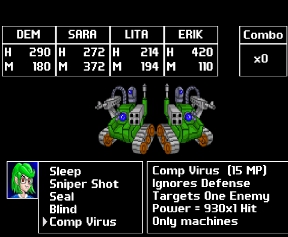 As Dem, who gets along just fine without a tongue and vocal cords thankyouverramuch, you'll have to lead your party all over the world, through towns and into dungeons where treasure may lie. (But usually just horrible, searing pain from all the monsters.) Use the [WASD] or [arrow] keys to move around, [spacebar] to open the menu, [ESC] gives you the option to quit, [enter] to select or interact, and the left [shift] key to cancel. You can save the game at any time by selecting the option to do so from the [spacebar] menu. The only items you get are potions (just "potion", really) that completely heal and revive you during battle, but can only be found in chests.

Battle is (you guessed it) turn-based in very classic RPG fashion, but with a twist. Successful consecutive attacks by any character increase your combo count, and when this is high, certain special attacks can deal massive damage to enemies... something you'll want to learn, since after each round, enemy strength increases by ten percent, so flattening them sooner rather than later is usually a good idea. As you might expect, winning battles nets you experience points, and when each character levels up, you'll be given the choice between two different sets of upgrades to apply to them, such as a batch of stat increases or a new ability. After each battle, your hit-points will be restored, but magic points need to be regained by renewal points, sleeping at an inn, or using a potion. (They do regenerate slightly after each battle depending on how well you did.) Each area has a finite number of random encounters, but if you want to grind some cash or levels, you can just select "fight" from the [spacebar] menu to duke things out as much as you like. 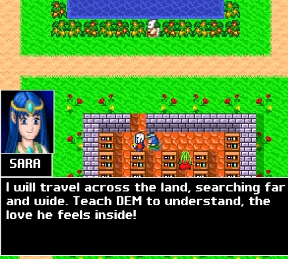 Analysis: Do not adjust your monitor... we control the horizontal, the vertical... oh, and also Breath of Death VII is supposed to look like it was made decades ago. While the style is clearly a love letter to the gaming days of yore, you'll also notice subtle and not-so-subtle nods to all types of games and pop culture. The constant references can get a bit old from time to time, especially since the game can be more than funny enough on its own. Erik the zombie prince, for instance, is a fresh (... figuratively speaking for a shambling corpse... ) spin on the "dashing, handsome prince" character. 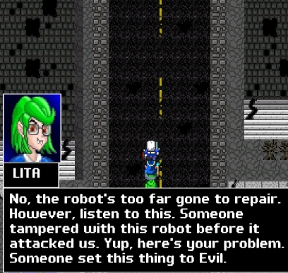 The dungeons, unfortunately, all tend to have a bad case of "endless corridor" going on, with otherwise interesting locales ruined by trudging down identical, winding hallways while fending off waves of random encounters. While you can mitigate this somewhat by parking yourself next to a renewal point and just plowing through all the stock battles so you can walk unharassed, and you can argue that this is sort of a staple of ye olde retro RPGs as a whole, that doesn't stop it from occasionally being more than a little annoying. These renewal points also make grinding levels obscenely easy if you're patient, and mean virtually every battle except the boss fights are a piece of heavily pixellated cake.

But where Breath of Death VII really succeeds is at crafting a short, sweet casual RPG experience that doesn't take itself too seriously. I personally took around four hours to finish it, and while I don't really feel the need to go back and do it again on a harder difficulty level, for a game made in three months by two guys (plus a handful of freelancers for the fantastic soundtrack) at under $3 US it's an absolute steal. The game does somewhat feel like it had the potential to be a lot bigger than it was, story-wise, and with a bit more variety it could have been an instant classic, but as it stands I still enjoyed every minute I spent with it. Robert Boyd and Bill Stiernberg are clearly a match made in nerdy RPG heaven, so it's a good thing they already have one other game available, with another in the works at the time of this writing. Breath of Death VII (no, there aren't six other games) has its flaws, but is absolutely worth your time.

I picked this up the other day, and played for a little while. It's really old school! I played for about 30 minutes and forgot to save... and then was killed. Needless to say, save often!