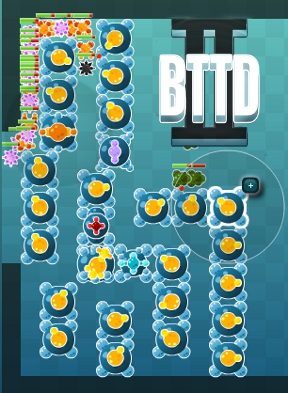 Bubble Tank, Bubble Tank, does whatever a Bubble Tank does! Which, turns out, is quite a lot where they're in the hands of Hero Interactive, and now they're back for even more tower-defending strategic gameplay with Bubble Tanks Tower Defense 2. With multiple ways and difficulties to play each level, new enemies, towers, upgrades, and a whopping 300 achievements to earn, it's packed to the gills with content and challenge for bubble enthusiasts everywhere. Now you can look back on all the time you spent directing elaborate bathtub wars between your rubber ducky and other toys as serious practice! Tell your parents, they're sure to be proud.

Like most games in the genre, your goal is to prevent enemies from reaching the right side of the screen, where presumably a pony orphanage or candy wonderland needs protecting. Unlike most games in the genre, here you'll typically get the chance to make your own paths for enemies to follow by placing your towers whenever you want to force baddies in the direction that best benefits you. Other levels go the more traditional route of having preestablished paths for you to build along. Whatever the case, you need bubbles to build! They're gained by destroying enemies, and can be spent on plopping down new towers, or upgrading existing ones. Clicking on a placed tower opens up an extensive upgrade menu, where you can change a tower's type to better deal with a certain type of enemy or boost nearby structures, or just keep upgrading the current path you're on. You can even combine blocks of four fully upgraded towers to get huge bubble behemoths! You'll earn achievements as you play, which in turn nets you experience points you can spend on everything from boosts to upgrades and even new game modes to challenge yourself with.

Bubble Tanks Tower Defense 2 is one of those games that's just compulsively playable... especially if you're a completionist. Don't let the lush, vibrant style and relaxing soundtrack fool you... there's some serious challenge to be had here, and just randomly dumping towers and upgrades is a good way to get your kiester trashed even on the first few levels. It encourages you to slow down and think about what you're doing, especially if you want to chain together tower effects or bring out the really big guns. After all, there are a lot of tower types to play with (like, a lot a lot), and it can get overwhelming if you don't spend some time familiarizing yourself with what they all do. The branching upgrade structure makes for a game that's at once both simple and surprisingly complex, and will appeal most to players who really want to feel like they have control over almost everything. Big, tricky, and most importantly bubbly, Bubble Tanks Tower Defense keeps the gameplay you love and packs even more onto it for a soapy game you won't put down until the wee hours of the morning.

I have not tried this yet but just a note that this review is missing the browser tag.

(us mobilely challenged folks may miss it!)

Yep, just played through the "open path" levels again at normal (which is very very easy), clicked "back" then clicked "level select" and none of the levels I'd just completed are counted. I'm guessing if you go to the upgrade screen they save? Because sometimes they do, sometimes not.

Also I have a particular strategy that relies on

area burst towers to do 90% of the work, with a sniper tower to take care of ghosts and mop-up.

I'll set my sniper tower to "nearest to goal" but often if there are multiple groups on the screen it'll ignore the ghosts heading to goal, and only shoot at the non-ghosts. It would be nice if (1) it targeted the actual nearest to goal monsters (seems like there's something about how it calculates path length) and (2) it'd be really nice if I could specify "target ghosts 1st".

This is one of "those" kinds of tower defense games. The kind where only a few very specific strategies work, and you're expected to know those strategies before you even hit the play button. Even on easy, just trying to experiment with the towers, I kept losing every time I hit the first splitter wave. It seems to me as though most of the towers are pretty much useless.

As much as I love the bubble tanks series, this is a pass for me.

Ok, I think I've figured out the issue I was having:

Pushing the "Next level" button does not reliably take you to the next level at the same difficulty you were playing before, so the reason I didn't think I was getting credit for finishing the "hard" levels is because I was, unbeknownst to me, playing at the "normal" level - which I had already completed. It also explains why I thought the difficulty was rather lower than I expected.

To avoid this, just go back out to the menu after each level and hand-select the next difficulty level.

I just hope the pause button works better in this one.
In the original I loved the game, but it just got too hectic. Hitting pause would wipe out the entire area of play so you couldn't even use it to think for a minute, let alone be able to lay down towers and reconfigure your defenses.

It just made the game into too much of a clickfest even using hotkey shortcuts. The base speed is also pretty fast and I dont think it has a slowdown/speedup option.
In gemcraft the default speed was quite slow so even if there was no pause, it wouldnt be that big of a deal.

Lots of work and not saving my progress most of the time. Love the bubble games, love the bubble defense. If the saving glitch gets fixed I will play it again. It is such a big issue I think it needs a notice put up if it gets fixed. It is well enjoyed and I bet other frustrated players would want to go for it again once it is better. I am sad; I wish it worked right.