Humans have wars, dice have wars, brutes have wars, even Stars have Wars, so it's natural to assume the insect world would have its share of conflict. BugBits is a light-hearted real-time strategy game built around a war between hives of bugs. Unlock and send troops across the paths to your foe's base, all while harvesting bugs dash out to gather nectar. Each unit has strengths and weaknesses that can be used to leverage your victory, and with each passing stage, you uncover more details in a sinister plot. 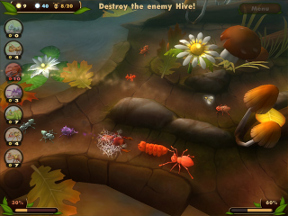 Everything in BugBits is built around one resource: precious glowing nectar. Nectar spawns from flowers and is used as currency to build troops. To create units, click on the icon then click which path you want it to spawn. Choosing a path is one of the basic elements of strategy in this game, as sometimes you'll want to move strong fighters to trails where attackers are approaching, while other times you just want to slip by defenses and hit the hive where it hurts.

One of BugBit's biggest gameplay strengths is its variety of stages. Instead of throwing you in level after level of bug-on-bug brawls, you'll play survival stages, defense levels, or have a limited time to tear the enemy hive to shreds. New units are unlocked by playing rescue stages. Here, the enemy is stationary and nectar is extremely limited. Push through the enemy lines and make it to the captured soldier and it's yours to command! 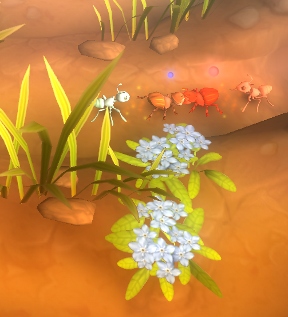 Analysis: BugBits could be at home on a mainstream gaming service like Xbox Live Arcade. While it may prove less serious than non-casual gamers would like, for the visual presentation, number of units, and extreme attention to balance issues alone, this game was obviously made with great care. That really shines while you're playing, as you'll find you get sucked into the game at the start of every single level, always wondering what awaits you on that gorgeous world map!

You'll unlock 20 types of units in BugBits, ranging from basic fighters to the more creative warriors with very interesting abilities. Using them together effectively is great fun, and it's also a bit of a challenge, as you often have to experiment to see which combinations are the most effective. Dropping a spitting beetle behind another unit is a good idea, for example, as the spitter has a long range attack and can deal damage without stepping in the line of fire. You'll also have to balance nectar harvesting with combat, adding another layer of delightful strategy to the experience.

Visually, BugBits has a sun-warmed evening kind of feel to it, with lots of fall-type colors and a soft look about every in-game object. Even though it usually isn't necessary, you can make use of the game's 3D design and hold the [right] mouse button to zoom in and take a closer look at the action. It's neat watching beetles and caterpillars fight with other bugs.

Although it certainly doesn't mar the game beyond the cosmetic, you'll probably catch more than one grammatical trip-up while playing BugBits. It's kind of a shame, as the game looks so professional on every other front...

BugBits: love 'em, fight with 'em, unlock more of 'em. A casual strategy game that was designed this well is one you should not ignore.

8,128 Views
5 Comments
chrpa— Jayisgames needs your help to continue providing quality content. Click for details Masa's games have a simple and clean graphics, and perfectly logic puzzles. The hints are absolutely clear and the only thing which you need is your brain and...  ...

4,351 Views
2 Comments
chrpa— Jayisgames needs your help to continue providing quality content. Click for details Notice, that this week will not be posted Weekday Puzzle. Instead, we have two perfect escapes - this one, and on Friday I'll post another one. Clay games...  ...