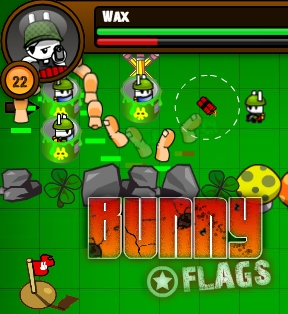 Upon first glance, seasoned gamers may have a tough time figuring out why Bunny Flags was arguably one of this month's most anticipated Flash releases. The notion of a cuddly, cartoon-looking, Rambo-esque bunny rabbit fending off hordes of macabre, disembodied thumbs doesn't convey the most sophisticated of premises… But as the developers at Game Launch Project proved with Bunny Charm last year—the studio's first attempt in the defense-shooter genre—you can't always judge a game by its creative style, despite how insanely ludicrous it appears. This is especially true of the newly released Bunny Flags, which effortlessly combines tower defense, fort survival and arena shooting—three of the most popular themes in the defense genre—into one hell of a slick, addicting little game.

You play the role of "White Rabbit," a long-eared, short-tempered combat bunny who—for whatever reason—is under constant siege by a variety of mean-tempered thumbs (and the occasional hand). The majority of levels are set up like a traditional tower defense playing field, with various obstacles scattered around to help the player construct walking paths and choke points. The basic gameplay and controls are familiar; use the [WASD] layout to move, [LMB] to shoot, hit [R] to activate "Rage" mode and smack [spacebar] to use your special ability (planting dynamite or swiping your knife, depending on your talent specialization). In addition to clicking the corresponding icons for towers and weapons at the bottom of the screen, number keys [1] to [5] can be used to select towers, while [6] to [0] will select weapons. Hold down [Shift] while placing towers to keep the current one selected.

Unlike most tower defense games, Bunny Flags features a unique, reversed "capture-the-flag" mechanic; instead of attacking a traditional "base," the enemy's goal is to grab your flag and return it to its spawn point. If an enemy manages to snag your flag, you'll only have a short time to shoot it down and recover the flag by touching it with your character. To make things a little more interesting, most levels feature several flags and multiple enemy spawn points, from opposite ends of the playing field. In addition, some levels feature an arena-shooter "survival" mode with no flags; it's just you against each enemy wave, armed with a few trusty weapons, your special abilities and an array of towers. 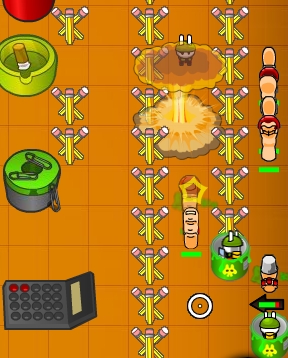 It should be noted that your "array" of towers is relatively modest; you have cheap barricades to direct the flow of traffic, gun towers ("Pistol"), slowing towers ("Snow"), poison towers ("Venom") and an area-of-effect tower ("Rocket"). True, it's not the most impressive setup for such a critically-hyped defense game, but that's because the towers mechanic  is just one of several gameplay components that Bunny Flags provides. It's also a solid shooter, backed with an impressive talent upgrade system, featuring five different guns (Pistol, Uzi, Shotgun, Rocket Launcher and Riot Shield) that offers a deeper gameplay dimension than many of its peers in the defense genre.

The talent system is based on level progression; players earn experience points by defeating enemies, completing achievements and winning levels (including a few other factors like difficulty setting and how well you performed). Keep progressing and invest points in the "Talent Tree," which is the heart and soul of Bunny Flags' awesome customization system. Three paths are available; "Engineer," "Commando" and "Destroyer," with each path unlocking new abilities (both active and passive) along the way. You can only distribute points in multiple paths until you reach a special ability that defines your specialization, such as unlocking the "Knife" ability (a melee AoE weapon) in the Commando's path, or the "Dynamite" ability in the Destroyer's path. Once you've chosen your path, the other two will be locked. You can reset your talent points at any time though, so don't be worried about making the wrong choice.

Analysis: Even at the "Casual" setting, early levels might prove to be a challenge until you've accumulated at least seven or eight talent points… Beginner talents that improve your fire rate, tower range or running speed don't even the odds much. It's not until you unlock your special ability that you'll probably notice the extra power (especially when you get to the second- and third-tier talents). At around 15 to 20 talent points you'll have a much better chance at replaying earlier levels on "Hard" or "Challenge" modes, which in turn provides more experience. You'll also have access to new and better weapons, depending on your path. Other talents improve innate abilities, such as adding a "slowing" or "poisoning" effect to your ammo, or giving you the ability to regenerate health. The Engineer is the only path that doesn't provide an "activated" ability like Knife and Dynamite. It may seem like a watered-down path, but if you prefer the tower defense style of gameplay, the Engineer bonuses—like reduced tower cost, increased range and damage—can't be beat. 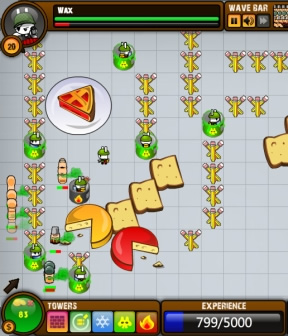 Bunny Flags follows a semi-linear progression throughout three level areas, beginning with the "Study" area of the world map (yellow tiles). After completing the first couple of levels in the Study though, you'll have the opportunity to veer off into the "Kitchen" area (white tiles) and later, the "Garden" (green tiles). Both the Study and Garden areas feature the reversed capture-the-flag gameplay; the only difference being that Garden levels have a more traditional—or rather, more defined—landscape layout. The Study, on the other hand, relies more on the player to create obstacles and paths using barricades and towers to achieve the "maze" style of gameplay, à la Desktop Tower Defense.

The Kitchen levels are all about survival and depending on your play style, you can use an even combination of arena-shooting and tower defense, or rely more heavily on just one strategy. In fact, you have that same choice in every level; it's a refreshing twist in the tower defense genre. Conversely, hardcore shooter fans will appreciate the ability use mobile, character-oriented combat in the strategy-driven, tower defense setting. Unfortunately, there comes a time in Bunny Flags when seasoned players will find themselves walking all over it, even on harder gameplay modes. Venom towers, poisoned ammo and the rocket launcher—in addition to a few other setups—might be a little too powerful, for example.

Enemy "pathing" is a bit glitchy and unpredictable at times, but perhaps that's a challenge-in-disguise. There are also a few fundamental balance issues that might rub players the wrong way. Some talents and abilities are built upon the strategy of engaging enemies in close-combat, yet provide no incentive to the alternative; it's easier to rack up experience by playing it safe and from a distance, with longer-ranged weapons. That being said, the developers have addressed several bugs; the latest revision increased leveling speed and added a few hotly-requested features (there's already talk of a Sniper Rifle being designed into the next build).

Bunny Flags is one of those shiny gems that doesn't come along every week, so we're glad to see the team at Game Launch Project responding to its success with updates and community interaction. If they keep striking while the iron's hot, this could be the beginning of a beautiful defense franchise.

Already played it on Kongregate, but thanks a lot. I'm all used to this game and it's fun.

I have a bit of a love/hate relationship with this game. Mostly love. I love the tower defense aspects and the ability to rush in and get in a few shots if my towers aren't quite killing everything just yet. However, I hate how many of the achievements require you to take a specific path...in this case shooting-centric paths.

I've gotten all the badges on Kongregate. Now that I'm done, I'm not going to play obsessively until I max out a tree or get 100%, but it's definitely one that's good for a few minutes every once in awhile.

i cant get the sniper rifle
i maxed out on all destroyer skills though
what do i do?

Yeah I can't unlock the sniper rifle either. It's bugged.