In Bromoco's text-based adventure Buried: Interactive Story, available for iOS and Android, an average day as a logger takes a turn for the bizarre. The last thing you can remember is an explosion, screaming... and now you've woken up, hours later, alone in the woods at night surrounded by devastation and silence. Something is clearly very, very wrong, and as you search for your fellow crew members and try to find out what happened, your choices over the course of five chapters will decide the outcome. Just tap the choice you prefer when one is offered... the rest of the time, the text advances on its own bit by bit. If you close the app, the game will automatically pick up right where you left off unless you choose to restart. Supremely creepy and well written, Buried makes for a great evening's read, though a single-file save system and an inability to manually advance the text makes it feel a little slow. 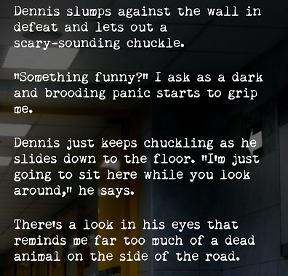 Buried is the sort of choose-your-own-adventure title that feels like the perfect fit for mobile devices, its tone and narration encouraging you to read it somewhere quiet and dark. It has enough choices to keep you feel engaged throughout, though not every decision is particularly important, and avoids throwing in too many cheap and unpredictable consequences, which is a pitfall other text adventures fall into. ("You pet the cat forty pages ago? YOU FOOL! Now the self-destruct sequence has been activated by the zombies!") The plot itself has a very X-Files-y feel to it, though clearly there's been some inspiration taken from TellTale Games' format given the way decisions are structured, and while things begin to head in some obvious directions, the narration plucks back its mystery piece by piece in a way that keeps you hooked. The characters are... fine, though there's really not a lot of room inside the pacing for anyone to get a whole lot of personality. It's the sort of thing that you'd probably see on SyFy Channel late at night starring pretty and scruffy but forgettable actors, plus or minus a cameo from, say, Ving Rhames. Which isn't a bad thing! Buried's brooding atmosphere and pulpy content make it a great fit for any horror fan looking for something less oppressive than your Event Horizons or your Silent Hills. 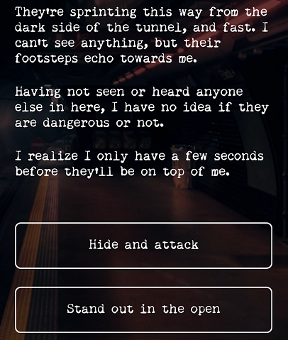 The downside is that the way Buried advances its text one piece at a time slows its pace to a crawl, making replaying more of a chore, and our hero's constant internal monologue starts to drag as a result when it's filled with so much lengthy rumination on anything and everything. Allowing players to tap through at their own speed might have sacrificed some of the great atmosphere built up by the moody sound and minimal visuals, but it would have been a nice option for faster readers, or anyone trying to start the story over again. I shouldn't feel like I wanted to set my phone down and do something else while I waited for the text crawl to finish, yet that's exactly what I found myself doing. Despite that, I never got annoyed enough to put it down for good, and Buried will likely keep you entertained for the time it takes you to read through, and its level of professional polish doesn't hurt either. There's a PC release on the way after a successful Greenlight campaign, but if you're a text adventure fan with a smartphone, Buried is a natural fit for it. Despite some predictability and s-l-o-w pace, Buried: Interactive Story is easily recommended for anyone who enjoys a good yarn packed with enough heebies and/or jeebies to keep you gripped.