Memories are amongst our most precious possessions, next to our flat-screen TVs. We spend millions on backups and storage and have been known to run back into burning buildings to save the family photos (after saving the kids and pets, of course, we're not monsters). Memories are what defines who we are, so the idea of slowly losing them can be terrifying, which is the basis of many a great movie, television show, and adventure game. Glitch Games knows this, which is why memory and its gain and/or loss is at the heart of their fantastic Forever Lost series of point-and-click (or point-and-tap) adventures. Now comes their latest effort, Cabin Escape: Alice's Story, the fabulous prequel in the form of a classic room escape. 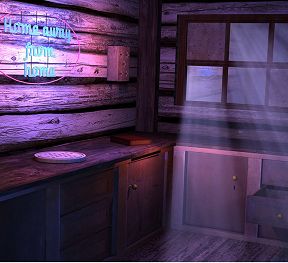 If you've played Forever Lost: Episode 1 or Episode 2 (and why haven't you, they're fabulous) you know at least some of the story. No spoilers here, but Cabin Escape fills in a significant blank in the story, as well as being a wonderful stand-alone gem. Jason, the protagonist of the aforementioned series, has left Alice alone in their vacation cabin. Being that she has difficulty retaining memories (Memento much?) Jason has tried to help by making the entire cabin a series of mind-benders in order to keep Alice's cognitive functions sharp. Yes, the plot has more than a passing resemblance to Tesshi-e's oeuvre of "locking someone into a confined space so they can have fun puzzling their way out", only with more moody atmospherics and less wobbly pictures.

You, as Alice, must tap around this haunting cabin and solve puzzles galore in order to walk out the front door. The game features the controls of the big games, the suitcase inventory and the wonderful in-game camera that you can use to take photos of anything that you might want to remember later. There is a hint feature available, but only as microtransactions, with one purchase unlocking a series of hints for one specific puzzle. With the presence of a few wicked brain-teasers and at least one mystery that requires thinking way outside the box, Cabin Escape: Alice's story is a lively challenge for room escape fans, especially those that would like to see the clear, logical elements common to the best eastern-designed escapes presented with a western flair. Glitch Games brings the escaping joy with this impressive titbit to tide the fans over until Forever Lost Episode 3.

The Finger-Paints, the Back Door, and the Safe

The Loft and the Peg Puzzle

The Fireplace and the Pretty Wood Box

The Dark Room and the Slider Puzzle

The Island Drawer and the Happy Face Puzzle

The Finger-Paints, the Back Door, and the Safe

The Loft and the Peg Puzzle

The Fireplace and the Pretty Wood Box

The Dark Room and the Slider Puzzle

The Island Drawer and the Happy Face Puzzle

Thanks for the help Grinny ... Excellent work!

I LOVE the Forever Lost series, and love this little snack to tide us over until 3 comes out! I also love that it is free (for now) so that friends who haven't tried FL 1 or 2 can give this one a try and see if they like the set up (how could you not?)

Meanwhile, FL 3 is slated to come out this summer, let's get excited!

Refreshing to have a really quality escape/adventure game.

That's the thing that has impressed me most about Glitch Games, the effort they've poured into this series making it such a high quality bunch of games. As a free option and basically a teaser for the next chapter, they could have slacked off a bit with Cabin Escape but instead they maintained the quality throughout, especially in the puzzles.

Nice, especially having just replayed both Forever Lost games (because they hold their value well). I'm really looking forward to part 3 this summer.

I, too, spent the weekend replaying Forever Lost Eps 1 and 2. Is it summer yet?